NEAR GOAL FOR REMAP REFERENDUM: Activists trying to trigger a referendum on Maryland’s new congressional map were within striking distance of their goal Monday, with the state’s Board of Elections accepting 46,700 names after analyzing about 80% of the signatures submitted, Annie Linskey reports in the Sun.

A TELLING DRIVE: When opponents of Maryland’s law granting in-state tuition to some illegal immigrants succeeded in petitioning the measure to referendum, Republicans gleefully promised that a new era was dawning. Then, opponents of gay marriage turned in an avalanche of signatures. But it will be the fate of a lower-profile effort, a drive to throw out the state’s congressional district maps, that will determine whether Republicans make good on their promise, opines the editorial board of the Sun.

GOOD & BAD IN AFFORDABLE CARE ACT: The Affordable Care Act upheld by the Supreme Court results in new tax burdens, require lots of paperwork and makes the shortage of primary care physicians worse, writes Len Lazarick of MarylandReporter.com. But, according to three CEOs of the Baltimore region’s top health care providers and insurers, it will expand health insurance coverage and possibly bend down the curve on costs by giving better access to care and changing payment methods.

CONSERVATION GRADES: The Maryland League of Conservation Voters has a number of strong allies from the Montgomery and Prince George’s delegations, with legislators from those counties scoring the highest average in the state. The full report will be released later today on the group’s website, writes C. Benjamin Ford for the Gazette.

Eighty-seven of the state’s 188 legislators earned a 100% from the Maryland League of Conservation Voters on their environment scorecard released Tuesday, writes Dana Amihere in MarylandReporter.com. More than 70% of this year’s A+ legislators represent constituents in Prince George’s and Montgomery Counties and Baltimore City — all large jurisdictions which elect no Republicans.

PEPCO SEEKS DELAY: Montgomery and Prince George’s residents may have to wait a bit longer to learn whether their electric bills will increase. Pepco has requested a 4% rate hike for its Maryland customers, meaning the average residential bill would increase by $5.50. And the Maryland Public Service Commission was expected to announce its decision on the request by this Friday, writes Victor Zapana for the Post.

BAY CLEANUP: District Mayor Vincent Gray has been chosen to lead the group overseeing the clean up of the Chesapeake Bay as area officials consider applying a “cap-and-trade” approach to those anti-pollution efforts, reports Steve Contorno of the Washington Examiner.

At the same meeting, reports Pamela Wood for the Capital-Gazette, the group said its efforts are on track to get the estuary off the nation’s list of “impaired waters.”

The consensus emerged from a meeting of representatives from the states. D.C. and the Environmental Protection Agency, and from an independent assessment by environmental groups that have been tracking one of the largest water pollution control projects in U.S. history, the AP’s Steve Szkotak reports in the Salisbury Daily Times.

WINE DELIVERY BOON: It’s been a year since the state repealed the ban on home wine delivery. That’s been a boon to some state vineyards that no longer have to ship wines using third-party distributors or rely solely on on-site sales to peddle their vino, writes John Arenas for the Capital-Gazette.

NATIONAL HARBOR BOOSTER: Martin Knott, the newly elected chairman of the Maryland Economic Development Corp., likes the idea of expanded gaming at the National Harbor, reports Bryan Sears of Patch.com. So do Knott’s friends, who just happen to run a public affairs firm that represents MGM Resorts and are running ads for union interests that want to see a new casino at the Prince George’s County site. Check out the two video commercials and one explainer attached to the story. The explainer connects Knott to CenterMaryland.org, which is a news aggregation site whose commentaries we sometimes link to.

AFZALI PUSHING FREDERICK CASINO: Time is of the essence in deciding whether the City of Frederick should join the hunt for a casino, Del. Kathy Afzali is saying as she presses the mayor and board of aldermen to take a stance on bringing a slots parlor to the area, reports Bethany Rodgers for the Frederick News-Post.

BROWN TO ADDRESS MACO: Lt. Gov. Anthony Brown will take on a more visible role in August when he is set to deliver the annual gubernatorial address at the Maryland Association of Counties conference in Ocean City, Annie Linskey blogs in the Sun.

CUOMO APPROACH: In contrast to Gov. Martin O’Malley, New York Gov. Andrew Cuomo, also mentioned as a potential presidential candidate even by his father, limits his out of state travel, does not talk to the national press and plans no major role in the Democratic National Convention, reports Danny Hakim in the New York Times.

LEOPOLD TO STAND TRIAL: Allison Bourg of the Capital-Gazette writes that Anne Arundel County Executive John Leopold will stand trial on four counts of misconduct and one count of misappropriation of taxpayer dollars, after a judge rejected a motion to dismiss the case yesterday.

Judge Dennis Sweeney ruled that a jury will hear all five counts leveled against Leopold, who is accused of dispatching his security detail for tasks that ranged from compiling files on perceived political enemies to ferrying Leopold to sexual rendezvous, writes Andrea Siegel and Erin Cox of the Sun.

CHARITY CUTS: Religious groups and community members, not the government, should form the backbone of funding for nonprofit agencies, according to some Frederick County commissioners. The board has been drawing fire from many in the community in past months for cutting county funding to a list of nonprofit groups that provide services from emergency shelter to senior care, writes Bethany Rodgers for the Frederick News-Post. 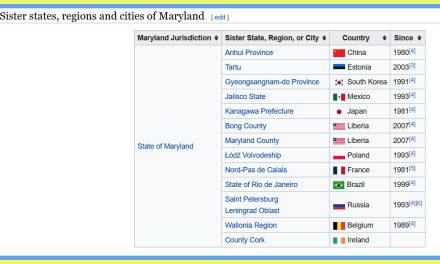