GANSLER BEGINS DNA RULING APPEAL: Maryland Attorney General Doug Gansler took a first step yesterday toward an appeal to the U.S. Supreme Court in a high-stakes case that blocks police across the state from collecting DNA samples when a person is arrested in connection with a violent crime or burglary, Yvonne Wenger reports in the Sun.

GREEN BILL SIGNING: Gov. Martin O’Malley plans to sign three high-profile environmental bills today, touting victories that have largely been overshadowed by the dysfunction at the end of the 90-day session, Greg Masters and John Wagner blog in the Post.

LOBBYING FOR SESSION: John Wagner blogs in the Post that Prince George’s County Exec Rushern Baker and Baltimore Mayor Stephanie Rawlings-Blake met with House Speaker Michael Busch yesterday to press their case for lawmakers to resume work on the state budget and take up a gambling bill this summer.

Dan Rodricks on WYPR-FM interviews Baker about the special session and gambling in Prince George’s. Alexander Pyles of the Daily Record writes that Baker told Rodricks that a billion-dollar casino at sprawling National Harbor would take some business away from the Maryland Live! facility at Arundel Mills mall but would “complement” a downtown Baltimore casino.

While many UM students worried about potential double-digit tuition increases after state lawmakers failed to negotiate on a state budget plan for next year, several officials said Gov. Martin O’Malley may be just weeks away from calling a special session, writes Jim Bach in the Diamondback.

And Pat Warren of WJZ-TV reports that here’s no word yet on whether the General Assembly will come back in a special session to resolve budget issues, but there are plenty of opinions both ways. Read her story here, the scroll down to view her report as she looks at the public sentiment.

COUNTY BUDGET QUESTION MARKS: Bethany Rodgers reports in the Frederick News-Post that Frederick County cost estimates and revenue projections have more than a few question marks, caused by uncertainty over state action, in its draft budget that local residents will discuss at tonight’s public hearing.

Director of Administration for Wicomico County Wayne Strausburg said colleagues with four decades of experience have been calling this “the most unusual budget cycle seen in Annapolis and here locally,” writes Calum McKinney for the Salisbury Daily Times.

MOM SEEKS DREAM DONATIONS: In an e-mail to supporters yesterday, Gov. O’Malley asked for contributions for a campaign to uphold a 2011 law allowing in-state college tuition rates for children of illegal immigrants.

STONE HONORED: Norman Stone is the longest serving member in the current Maryland General Assembly and the longest serving state senator in Maryland history, writes Len Lazarick for MarylandReporter.com. He is historical artifact in other ways: one of the last remaining fiscally and socially conservative Democrats – an opponent of tax hikes, abortion and gay marriage, a supporter of labor unions and the rights of workers and crime victims.

ATTY GEN RACE PART II In Part II of his column on who will run for state Attorney General, Josh Kurtz of Center Maryland speculates on a list of possible candidates that could make the race exciting. That list include judge and first lady Katie O’Malley.

PIT BULL FALLOUT: The Maryland Court of Appeal decision on pit bulls could have far-reaching implications for landlords and dog owners who rent, writes Jessica Anderson for the Sun. Landlords could opt to ban pit bulls or all dogs to avoid future liability, or they could see increased insurance costs, industry experts said. In turn, as pit bull owners have difficulty finding housing, animal advocates fear more dogs will be left at shelters.

Jennifer Shutt of the Salisbury Daily Times writes that the Humane Society of Wicomico County is in limbo after the Maryland Court of Appeals ruled Friday that pit bulls should be considered “inherently dangerous.”

HENSON’S TRIAL: The editorial board for the Sun opines that political operative Julius Henson is alleging, in his robo-call trial, a broad-ranging conspiracy among top Maryland Democratic officials to punish him for this offense because he had the temerity to work for a Republican in the 2010 election. And he says he has proof that others have broken the law on behalf of Democrats. The public (and prosecutors) would surely love to see it.

COUNTY WITHDRAWS SUIT: A contract to hire an outside attorney to sue Merrill Lynch over a failed $21 million investment has been withdrawn by Baltimore County, reports Bryan Sears for Patch.com.

Don Mohler, chief of staff to County Executive Kevin Kamenetz, said outside attorneys told the county late last week that they were no longer interested in pursuing the lawsuit because they were “less than pleased” with new reports surrounding the case, Alison Knezevich of the Sun writes.

FREE TIX FOR BA CO GOV’T: Baltimore County Executive Kevin Kamenetz and some County Council members accepted thousands of dollars’ worth of tickets to sporting events from developers and others last year, a practice the county has continued to allow in violation of state ethics standards, Alison Knezevich writes in the Sun. 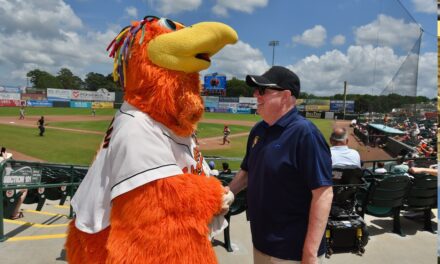