CONSTELLATION MERGER: Top executives of Constellation Energy Group and Exelon Corp. faced questions from the Public Service Commission about reliability, local management of BGE, and corporate governance yesterday at the start of what is expected to be an exhaustive regulatory review of the proposed $7.9 billion merger of the two energy giants, writes Hanah Cho of the Sun. There is also video at the top of the story.

WBFF-TV’s John Rydell reports on the testimony, and speaks with one person who opposes the merger.

Alex DeMetrick of WJZ also reports on the hearing.

PLANMARYLAND: Megan Poinski of MarylandReporter.com writes that 100 people attended a forum sponsored by the Carroll County Board of Commissioners to look at some of the deeper issues underlying PlanMaryland – like the economic and environmental concerns cited in the comprehensive state development plan.

Speakers accused state officials of inflating statistics and muddying facts to better make a case for PlanMaryland, which would designate targeted growth areas, writes Nicole Fuller of the Sun.

Bethany Rodgers of the Frederick News Post reports that the state Planning Department is estimating that over the next 20 years, the policy could save the state $29 billion in road maintenance costs and $406 million in water and sewer and school construction costs by encouraging denser development.

In an op-ed in the Sun, Richard Hall, Maryland Secretary of Planning, explains that he decided to attend the meeting on PlanMaryland to defend the rural landscape.

NEW REDISTRICTING COMPLAINT: The Fannie Lou Hamer political action committee has a new complaint about Gov. Martin O’Malley’s congressional map: It says the map improperly counts prisoners at their last known address, instead of where they are incarcerated, the Sun’s Annie Linskey blogs.

AIDES STEP DOWN: John Favazza, one of two chiefs of staff for House Speaker Michael Busch, is stepping down to join an Annapolis lobbying firm. And Patrick Murray is leaving his post as deputy chief of staff to Senate President Mike Miller to become director of state government relations at Johns Hopkins University, blogs John Wagner at the Post.

The moves follow a long Annapolis tradition of top staff moving over to lobby, Annie Linskey blogs for the Sun.

NO TO GAS TAX HIKE: The editorial board for the Salisbury Daily Times has come out against a proposed hike in the gas tax and other related fees, but says the flush tax might be more palatable.

BOND FOR GAY MARRIAGE: Longtime national civil rights leader Julian Bond is the latest face of a campaign to build support for same-sex marriage in Maryland, John Wagner blogs for the Post.

MARYLAND REGISTER: Josh Kurtz reports in Center Maryland that the Secretary of State’s office is now changing $190 a year for real-time online access to the Maryland Register, a service that used to be free.

TOLL HIKE: After months of debate and contentious public hearings, the first phase of the largest toll hike in Maryland history became official at 12:01 this morning, writes Michael Dresser for the Sun.

CURRIE TESTIMONY DONE: Testimony in the bribery trial of state Sen. Ulysses Currie concluded yesterday and closing arguments will begin at 10 a.m. tomorrow, writes the Post’s John Wagner. Still, as the trial neared its end, federal prosecutors raised questions about a second company for which the Prince George’s Democrat has indicated he served as a consultant.

Jurors heard testimony from an FBI agent who questioned Currie during a search of his home in 2009, when investigators seized documents including emails, financial statements and a consulting agreement relating to his work with Shoppers Food Warehouse grocery chain, Daniel Leaderman reports for the Gazette.

BROWN BIRTHDAY FUNDER: Following on the heels of Attorney General Doug Gansler’s announcement of his upcoming birthday fundraiser, filled with a roster of Frederick politicians, Lt. Gov. Anthony Brown is making a statement with his own birthday fundraiser, blogs Maryland Juice. Both are rumored to be seeking the Democratic nomination for governor in 2014.

BAKER ON PRINCE GEORGE’S: Prince George’s County Executive Rushern Baker spoke to the West Laurel Civic Association last week, the first time a county executive has attended a WLCA meeting. He discussed the restructuring of the Prince George’s County fire commission, the county’s need for a revamped image and the quality of service of Laurel Regional Hospital, according to a story in the Laurel Leader.

OCCUPY BALTIMORE: Melinda Roeder of WBFF-TV reports about a break down at the Occupy Baltimore site, including a reported rape and alleged drug use. 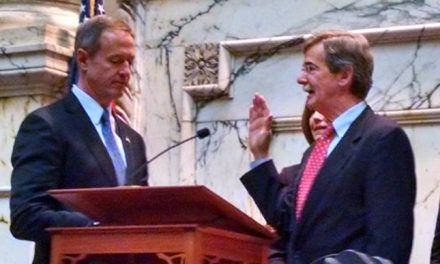