Washington Post reporters John Wagner and Anita Kumar report that O’Malley was a constant presence on TV, the internet and airwaves before and as the storm hit. In the aftermath, he’s been constantly touring the state to see damages firsthand.

WHO GETS POWER FIRST?  Looking at the hundreds of thousands of Baltimore Gas and Electric customers still without electricity after Hurricane Irene, The Sun’s Jay Hancock asks if big shots – like Gov. Martin O’Malley or Public Services Commission members – are on a secret list to get their power restored first.

BGE President tells Lt. Gov. Anthony Brown that the company is working as hard as it can to restore power, calling on out of state crews and staying on the problems around the clock, reports Len Lazarick for MarylandReporter.com.

Here’s more from BGE’s briefing of Brown by Tim Lemke on Odenton Patch.com.

TRAFFIC LIGHTS OUT: The inoperative traffic lights due to the power outages from Hurricane Irene have again raised the issue that Maryland has no law requiring motorists to stop at intersections where the lights are out, despite the belief it is required, Bryan Sears reports on Patch.com.

MARYLAND VS. VIRGINIA: How can Maryland create more jobs and achieve better economic stability? Be better than Virginia, a panel of business leaders tells the Senate Budget and Taxation Committee, reports Megan Poinski of MarylandReporter.com.

The Daily Record’s Nick Sohr blogs about Greater Washington Board of Trade President and CEO’s take on Maryland-Virginia competitiveness.

PLAN MARYLAND: The Maryland Association of Counties has released its public comments on PlanMaryland, the latest draft of the state’s attempt to regulate future development in the counties and prevent sprawl.

Carroll County Commissioners unanimously voted to send Gov. O’Malley and the Maryland Department of Planning a letter outlining their concerns with PlanMaryland, reports Christian Alexandersen of the Carroll County Times.

Republican and Democratic senators continued to raise tough questions about the governor’s proposal for a major wind power projects off the Atlantic coast, Aaron Davis reports in the Washington Post blog.

FAMILY HEALTH ADMINISTRATION AUDIT:  In a report released Tuesday, state auditors said that $88,000 in claims paid to health care providers by the Family Health Administration were not checked out to ensure they were legitimate, reports Andrea Walker of The Sun.

ANNE ARUNDEL REDISTRICTING HEARING: Brian Griffiths of Red Maryland charges that the Anne Arundel County hearing on redistricting – postponed, then abruptly rescheduled and moved, both on the day it took place – was designed to limit Republican participation. Griffiths did testify at the hearing, and posted his testimony on the blog.

RAWLINGS-BLAKE BROKE HOMESTEAD RULE: Before becoming Baltimore mayor, Stephanie Rawlings-Blake and her husband collected homestead tax credits on two properties, violating a rule that prohibits married couples from getting the credits on more than one property, reports The Sun’s Jamie Smith Hopkins and Julie Scharper. Before Rawlings-Blake was sworn in, her husband voluntarily paid back the tax credit for one of their properties.

Mayoral candidate Frank Conaway Sr. and his wife are also getting the tax credit on three properties. Smith Hopkins blogs about how many people who are double and triple-dipping on the tax credits don’t even know they are breaking a state rule.

Rawlings-Blake declined to be interviewed for the Sun article, but WBAL reports on a statement she sent out after it was published, saying that the problem was “voluntarily fixed” by her husband years ago.

LAST CANDIDATE FORUM: At the last candidate forum before early voting begins on Thursday, mayoral challengers attacked Rawlings-Blake for assessing too many taxes and funneling money to developers, reports The Sun’s Julie Scharper.

City nonprofits used the forum to build promises – and future accountability – from the candidates, blogs Fern Shen at Baltimore Brew.

Erin Cox of The Capital reports that the conviction could mean $25,000 in fines, a year in prison, and the loss of Jones’ law license. 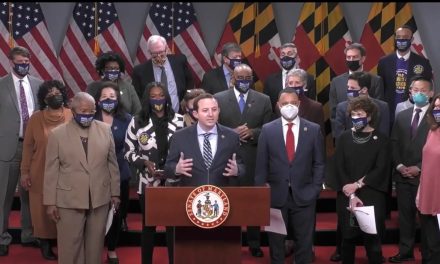