GAY MARRIAGE REBOUND: Progressive advocates pledged to dial up the volume in favor of a state same-sex marriage bill after falling a few votes short last session and launched a new group aimed at making Maryland the seventh state to pass the law, reports Annie Linskey of the Sun.

Also, Gov. Martin O’Malley is weighing whether to sponsor a same-sex marriage bill during next year’s legislative session and is likely to make a decision soon, reports John Wagner for the Post.

BOND SALE DELAY? Megan Poinski of MarylandReport.com writes that if the dispute between the White House and Congress over lifting the U.S. debt ceiling is not resolved soon, the state may put off its scheduled bond sale of upwards of $500 million set for July 27, the state treasurer’s office told a legislative committee yesterday.

TWICE THE VALID SIGNATURES: State officials sifting through thousands of pages of petitions reported that a group trying to repeal the in-state tuition law have 96,441 valid signatures, nearly twice the number needed to trigger a referendum, Annie Linskey of the Sun blogs.

DISMISS THE DREAM: The Frederick News Post editorial board writes that, “if petitioners win that legal argument — and we suspect they will — then we encourage citizens to vote in favor of wiping the Dream Act off the books.”

COMPUTERIZE REDISTRICTING: Opinionators at the Annapolis Capital bemoan the upcoming redistricting process, writing that it is “a crass exercise in protecting incumbents and sticking it to the minority party. The job could easily be done by a few nonpartisan demographers and a computer – and we fervently wish it were being done that way.”

DOGGIE DINING: It’s not uncommon to see restaurant patrons enjoying the weather in outdoor seating areas with their dogs tied to their table or chair. Now, it’s not illegal, either, Jon Meoli writes for the Towson Times. But first the restaurant must apply to its local health department.

Ready’s prior tenure as the party’s top staff member ended in July 2009, when he was fired during a tumultuous period by then-chairman James Pelura, reports John Wagner in the Post.

CURRIE SEEKS PASSPORT RETURN: Attorneys for indicted state Sen. Ulysses Currie are trying to get his passport back temporarily so he can attend a conference in Canada, according to an AP report in the Annapolis Capital.

BAY CLEANUP: Government leaders in charge of the Chesapeake Bay cleanup proclaimed that the effort to restore the waterway is stronger than ever – even as some states raised questions about the specifics of cleanup plans and how to pay for them, Pamela Wood reports for the Annapolis Capital.

PEPCO SCORES WORST: Pepco finished dead last among 225 U.S. companies rated in the latest American Customer Satisfaction Index, reports Margie Hylsop of the Gazette. Its score of 54 out of 100 was well below the 74 average score for all investor-owned utilities, as well as the 74.7 and 73 averages scored by cooperative and municipal utilities, respectively.

PRIVATIZATION PROTEST, PUSH: Bethany Rogers of the Frederick News Post reports that a stream of Frederick County employees appeared before the Board of County Commissioners last night at a packed public hearing where most speakers voiced strong opposition to large-scale outsourcing of government services.

Frederick County Commissioners President Blaine Young is sharing the county’s privatization proposal with leaders from across the state, reports Meg Tully from the News Post. He spoke yesterday to a group of county leaders at a conference hosted by the Maryland Association of Counties.

NO SMOKING IN PARKS: Banning smoking in most workplaces, as Maryland did in 1995, was a major public health advance. So was extending it to bars and restaurants. The ban on smoking in Howard County’s parks, which County Executive Ken Ulman plans to announce tomorrow? Not so much, writes the Sun editorial board, but it’s still a good idea.

Fifty-seven parks are affected, reports Kai Jackson of WJZ-TV. Visitors caught smoking will be asked to stop; a second offense and they’ll be asked to leave.

KOLBE TO CHAIR BA CO GOP: Raven Hill of the Sun reports that Steve Kolbe will replace Tony Campbell as chair of the Baltimore County Republican Central Committee as members seek to present a unified front.

HOMAN OUT OF SHOCK TRAUMA: Fred Homan, Baltimore County’s chief operating officer , has been released from Shock Trauma after a weekend horseback riding accident, Bryan Sears of Patch.com reports. He also reports that Homan is described as an experienced, intermediate level rider.

ENVIRONMENTAL GUIDANCE: When the current Carroll County Board of Commissioners took office they developed a set of principles to serve as a foundation for the board’s philosophy and actions. Now the board’s president is hoping that it will soon adopt an accompanying group of environmental principles, reports Carrie Ann Knauer for the Carroll County Times. The principles are to the left of the article. Scroll down to read reader comment on them.

RECYCLING PROGRAM: Heather Keels of the Hagerstown Herald-Mail reports that the Washington County Board of Commissioners want to know where residents stand on curbside recycling, and have decided to schedule a public information meeting to accept comment on the idea of starting a county program.

MILLER LEAVES WBAL-AM: Veteran Baltimore newsman Mark Miller is leaving WBAL radio after more than 31 years at the station, writes David Zurawik of the Sun. As news director for 21 of those years, Miller led one of the most competitive and ambitious radio news operations in the country.

As a reporter, Miller won two Maryland State Bar Association gavel awards, the Silver Gavel from the American Bar Association, and was recognized by United Press International for his radio accomplishments, reports Rachel Bernstein in the Daily Record. 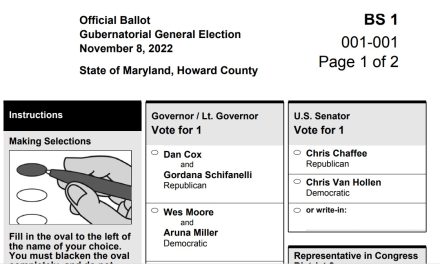