GINGRICH IN MD: Former Speaker of the U.S. House Newt Gingrich is the latest 2012 Republican presidential candidate to come to Maryland, telling a crowd of Republicans that President Obama was “dangerously misinformed” when he told the nation that the “tide of war is receding” in a Wednesday night address, reports The Sun’s Julie Bykowicz.

Gingrich challenged the president to withdraw the phrase, according to an Associated Press story in the Carroll County Times.  He said that Obama is dangerously misleading the American people.  WBFF has video.

Even though Republicans agreed that Gingrich gave a good speech, they don’t favor him to get the party’s nomination in 2012, blogs Len Lazarick of MarylandReporter.com. More prefer Mitt Romney.

IMMIGRANT TUITION PETITION: Although opposition to in-state tuition is generally thought of as a Republican issue, almost a third of the people who have signed the petition to put the question on the ballot are Democrats, blogs The Sun’s Annie Linskey.

CIGAR BAN NOT ENFORCED: Comptroller Peter Franchot told smokers and out-of-state tobacco dealers that he will not be enforcing a new ban on online premium cigar sales, reports Jay Hancock of The Sun. The ban, intended to keep the cigars from minors and tax evaders, sparked an intense e-mail campaign from smokers.

HOCO COUNCIL EXPANSION CONSIDERED: The number of Howard County Council members has not changed in 40 years, and members of the county Charter Review Commission held a discussion on Wednesday to look at whether they should add additional members so the council job can continue to be part time, reports The Sun’s Larry Carson.

CONAWAY LAWSUIT: Blogger Adam Meister, who reported in March that Baltimore City Councilwoman Belinda Conaway did not live in the city limits, has asked a judge to dismiss a $21 million lawsuit she has filed against him, reports The Sun’s Julie Scharper. In the motion to dismiss, Meister’s attorneys say the lawsuit would chill free speech in Baltimore – and silence the blogger during Conaway’s re-election campaign.

BAKER PLANNING BOARD ANNOUNCEMENTS: Prince George’s County Executive Rushern Baker will be naming development lawyer and former chairwoman of the County Planning Board Betty Hewlett as the board’s leader once again, reports The Post’s Miranda Spivack and Ovetta Wiggins. He is also ready to nominate two new board members.

ONLINE SALES TAX: WBAL-TV President and General Manager Dan Joerres wrote an editorial for the station’s website examining the issues that would come into play if Maryland were to try to enact an online sales tax.

1st CONGRESSIONAL DISTRICT: Changes may be coming to the district lines for the 1st Congressional District that includes the Eastern Shore, Daniel Divilio reports in the Easton Star-Democrat. (The Star-Democrat has apparently dropped its paywall that restricted content to subscribers.)

SEPTIC STUDY: The Star-Democrat reports on the views of some of the members of the new task force appointed by Gov. Martin O’Malley to study the use of septic systems, a hot topic on the Shore.

BRAC: Local officials praise BRAC, the base realignment and closure process that is bringing thousands of jobs to Maryland, but they worry about the impact on commuters, Andrew Ujifusa reports in the Gazette.

GRADUATION RATES: There is likely to be a significant drop in high school graduation rates, particularly for Baltimore City and Prince George’s County, as the state recalculates how to determine the figures, writes Andrew Ujifusa in the Gazette.

MUNCIPAL LEAGUE: At their annual conference in Ocean City next week, Maryland municipal leaders will be discussing highway funds and a possible gas tax hike, Alan Brody and Sarah Breitenbach report in the Gazette.

IMMIGRATION: At a meeting of the commission studying the impact of immigration on Maryland, experts discussed how it would be affected by laws in neighboring states restricting the employment of illegal immigrants, Sarah Breitenbach reports in the Gazette. 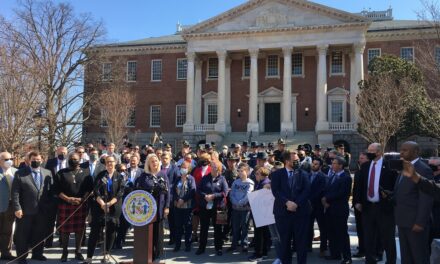