HEALTH REFORM PUSH: Maryland continues to press ahead with aggressive implementation of federal health care reform. Gov. Martin O’Malley appointed the members of the board of the new Health Benefit Exchange, a key component of the Affordable Care Act, and named the head of the new Office of Health Care Reform on the governor’s staff, reports Len Lazarick of MarylandReporter.com.

Sarah Breitenbach in the Gazette examines whether the new health benefit exchange will help reduce costs.

Therese Goldsmith, a member of the Public Service Commission and formerly a white-collar litigation attorney with Hogan & Hartson, will take the insurance post July 1, writes Nick Sohr for the Daily Record.

TAX REVENUES UP: Maryland tax revenue is on the upswing and appears likely to exceed forecasts for the fiscal year, according to Comptroller Peter Franchot. reports Scott Dance for the Baltimore Business Journal.

IN-STATE TUITION PETITION: State Del. Pat McDonough believes the cost to give illegals in-state tuition could be hundreds of millions over the next decade, reports Janice Park for WBFF-TV.

STATE FURLOUGH DAY: State agencies throughout Maryland will be closed or offering reduced services for a furlough day today, according to an AP story in the Salisbury Daily Times.

FEUD FUEL: John Wagner of the Post blogs that the latest flare-up in an ongoing feud between Democratic Gov. O’Malley and his Republican counterpart in New Jersey came yesterday as Gov. Chris Christie announced his state was pulling out of a regional greenhouse gas compact.

BAD DRIVERS: Maryland motorists may not be the nation’s worst, but they seem to be close contenders, ranking 49th of 51, blogs Michael Dresser for the Sun.

TEACHER OF THE YEAR: O’Malley dropped in to see National Teacher of the Year Michelle Shearer, who teaches chemistry at Urbana High School. Here’s a video of his visit with Shearer and her students.

ACLU ON SPOUSAL PRIVILEGE: The American Civil Liberties Union of Maryland is representing a Washington County woman who last month invoked her privilege not to testify against her same-sex spouse in an assault case, writes Don Aines of the Hagerstown Herald Mail.

SOLAR FARM GETS WAIVER: Maryland Solar LLC has received the waiver it needs from the Maryland Public Service Commission to begin construction on a $70 million, 20-megawatt solar farm by the end of this year, reports Don Aines of the Hagerstown Herald Mail.

NO DISCLOSURE: A proposal to prohibit the federal government from requiring federal contractors to disclose campaign contributions was approved by the Republican-led House of Representatives yesterday as part of a massive bill that sets funding priorities for the military, blogs John Fritze of the Sun.

GBC PLAN: The Greater Baltimore Committee’s plan for redeveloping a portion of downtown Baltimore is a good way to go since it provides a roadmap for a financing package with more than half coming from private sources, writes the editorial board for the Daily Record.

John Rydell of WBFF-TV reports that tourism officials say the project is desperately needed to stay competitive with other cities.

ARUNDEL BUDGET: The Annapolis Capital, like the Sun yesterday, praises the Arundel County Council during “particularly painful” budget deliberations for getting the job done and passing a budget.

MONTGOMERY BUDGET: While the Montgomery County Council unanimously passed a $4.37 billion budget yesterday that will increase spending 2.2%, the current year’s budget shrank for the first time in more than 40 years, blogs Michael Laris for the Post.

County residents will not pay higher taxes or fees under the budget, but some county employees will go without pay raises promised them last year, Ben Giles reports for the Washington Examiner.

ENVIRONMENTALISTS ON O’MALLEY: Despite his signing of the trash burning bill, environmental groups will continue to work with Gov. Martin O’Malley because they have no one else to turn to, Sarah Breitenbach reports in the Gazette.

Barry Rascovar in the Gazette opines about O’Malley’s relations with environmentalists.

VETERANS CEMETERIES: As Memorial Day approaches, the Gazette’s Benjamin Ford takes a look at the five cemeteries operated by the Maryland Department of Veterans Affairs.

ALCOHOL TAX: Advocates of raising alcohol taxes across the nation tell the Gazette’s Alan Brody that Maryland’s approach this year might be a model for the rest of the nation.

ANOTHER RACE TO THE TOP: Maryland will compete for some of the $500 million in federal grants to improve early childhood education, Andrew Ujifusa reports in the Gazette.

PG DEVELOPMENT DEALS: Corrupt development deals were a way a life in Prince George’s County, activists complain, according to Daniel Valentine in the Gazette. 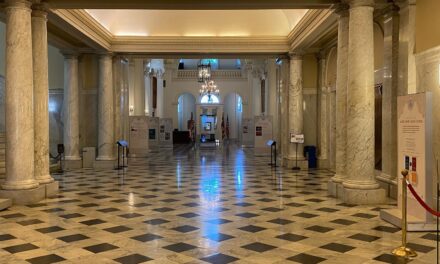