TRANSGENDER PROTECTIONS: Gov. Martin O’Malley says that he would work with state lawmakers to “provide even greater protections” for transgender people in the wake of the beating of a woman at a McDonald’s restaurant, reports the Sun’s Julie Bykowicz. Lawmakers who fought unsuccessfully this year for legislation to prohibit employment and housing discrimination against transgender people welcomed the support.

Here’s a video interview with a mother and her transgendered child concerning the issues.

The Sun editorial board writes that it is worth reaffirming the importance of hate crime statutes and the legal basis for them.

UNFUNDED LIABILITIES: Megan Poinski of MarylandReporter.com reports that, while most of the focus on pension reform for public employees has been on the state as a whole, counties are also finding themselves with growing unfunded liabilities, according to the Maryland Public Policy Institute.

The institute created a map to outline the problem. You can find it here.

TRASH BURNING BILL: Gov. O’Malley has announced that he’ll sign a bill opposed by environmentalists that would grant financial incentives to facilities that produce power by burning trash, Tim Wheeler reports for the Sun.

O’Malley said that after “careful deliberation,” he concluded that the bill would help Maryland reach an “aggressive goal” of generating 20% of its energy from Tier I renewable energy sources by 2022, report the Post’s Ann Marimow and John Wagner.

Meg Tully of the Frederick News Post reports that the bill is scheduled to be signed at a ceremony tomorrow, the last of such ceremonies held after the conclusion of the Maryland General Assembly session last month.

FERTILIZER LIMITS: John Patti of WBAL-AM reports that O’Malley will also sign the bill limiting the use of lawn fertilizers, a growing source of Chesapeake Bay pollution.

DREAM’S COST: Potentially hundreds of undocumented students not originally considered in government tax estimates are planning to attend college this fall, according to student enrollment predictions by CASA de Maryland, reports Glynis Kazanjian for Patch.com. If CASA’s student enrollment projections are correct, real fiscal costs could be double or triple what was originally estimated in the bill’s fiscal note.

DREAM RALLY: Jeff Barnd of WBFF-TV reports on a high school rally, attended by Lt. Gov. Anthony Brown, in support of Maryland’s DREAM Act and the opposition rally that took place outside.

MILITARY DREAM: In an op-ed in the Annapolis Capital, Navy veteran Michael Collins writes that children of military families who must move with their parents don’t qualify for the in-state tuition benefit that illegal aliens now receive.

WINES AT FARMERS MARKETS: O’Malley signed a bill into law allowing Maryland wineries to sell their goods at up to 12 farmers’ markets annually. Up to six permits may be utilized at the same market venue, writes Steve Schuster for the Towson Times.

FAMILY TREE: In an op-ed in the Frederick News Post, Marta Mossburg writes about the O’Malley-Curran political dynasty that is overtaking Maryland.

SCHAEFER’S WILL: Let’s peek behind the curtain and read how the late Gov. William Donald Schaefer disbursed his estate in his will. The Sun’s Liz Kay, Scott Calvert and Laura Vozzella write the story.

You can read the will in its entirety here. And here’s a Sun photo gallery of the beneficiaries.

LEAVE EXPENSE: The military would cover travel expenses for about 440 Maryland National Guard soldiers stationed in Egypt when they return home on leave under a proposal that U.S. Rep. Dutch Ruppersberger plans to unveil today, blogs John Fritze of the Sun.

TOWARD THE NEXT RACE: Del. Guy Guzzone has $100,274 in campaign cash put aside, likely enough to pay for another run for the General Assembly, but he said his annual home pizza party should boost that total by at least $35,000 as he ponders a run for higher office, including Howard County executive, reports Larry Carson for the Sun.

CARROLL’S UNSMART GROWTH: The editorial board for the Carroll County Times writes that opposing ideologies over land use have the Carroll County Board of Commissioners and State Department of Planning on a collision course, and it will be residents here who will be forced to pick up the pieces after the inevitable train wreck.

JOHNSON PLEADS GUILTY: Former Prince George’s County Executive Jack Johnson pleaded guilty yesterday in U.S. District Court to witness and evidence tampering charges and to being involved in an extortion conspiracy relating to his official duties as the county’s top official. He faces up to 20 years on each count plus fines, reports Gwendolyn Glenn for the Laurel Leader.

Johnson admitted that he took more than $400,000 in bribes, agreeing to a plea deal that showed he began shaking down developers almost from his first days in office, writes Ruben Castaneda and Miranda Spivack for the Post.

Johnson will be sentenced Sept. 15, and remains free until that time, reports Michael Neibauer for the Baltimore Business Journal.

Mike Hellgren of WJZ-TV offers this video report from Greenbelt.

PG BONUSES: An 11th-hour deal that could lead to one-time bonuses for Prince George’s 6,000 employees marks a truce between the County Council and County Exec Rushern Baker over a $1.2 million pay increase he said was unaffordable. But, write Miranda Spivack and Hamil Harris for the Post, a lawsuit from union workers is likely, officials said.

CHARTER PETITION: Petitioners who want an elected charter-writing board for Frederick County have a lawyer to take their case, reports Patti Borda for the Frederick News Post. 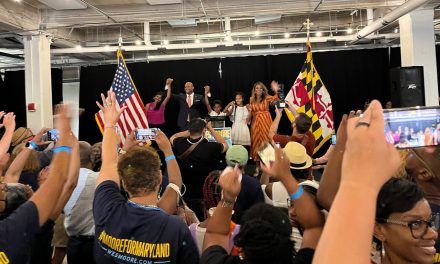