TOLL INCREASES: Numbers to go with the long discussed toll increases were introduced to the Maryland Transit Authority Board, and they could represent the steepest hikes in state history, reports The Sun’s Michael Dresser. A toll facilities expert tells Dresser that while these increases are steep, they make up for years when Maryland lagged behind national trends. Transportation Secretary Beverley Swaim-Staley told Dresser that the state’s roads and bridges are getting to the age where they need serious rehabilitation, and toll increases will pay for it. And Sen. E.J. Pipkin tells Dresser that he finds the toll increases outrageous.

The Washington Times’ David Hill writes that toll increases could go into effect as soon as October.

Erin Cunningham in the Gazette writes that Peter O’Malley moves from the unpaid post as chairman to a position that pays $140,000 a year.

Peter O’Malley worked for O’Malley when he was mayor of Baltimore, developing the CitiStat program, reports the Baltimore Business Journal’s Scott Dance.

REDISTRICTING: Sarah Breitenbach in Gazette reports on the computer mapmaking tools that could give citizens potentially more say in the drawing of lines for legislative and congressional districts.

O’MALLEY: The Gazette’s Alan Brody assesses Gov. Martin O’Malley’s role as chairman of the Democratic Governors Association, which will bring him to Kentucky this week, one of only four states that will elect governors this year.

PETITION DRIVE: Organizers of the drive to put the immigrant tuition law on the ballot in 2012 say they are on target to meet the high hurdle for the number of signatures, Sarah Breitenbach reports in the Gazette.

EDUCATION FUNDING: Counties are tightening funding for schools in the wake of new maintenance-of-effort requirements, Andrew Ujifusa reports in the Gazette.

MTA NUMBERS GAME: Opinionators at The Daily Record say the Maryland Transit Administration should not find their budget numbers increasing until they can provide reliable data about whether their ridership numbers are.

NEW, PERMANENT POSITIONS: Gov. Martin O’Malley named Ted Dallas, the interim secretary for Human Resources, as the permanent man for the job, reports The Sun’s Julie Bykowicz. He also named Raquel Guillory as his new communications director, and Catherine Motz as his new deputy chief of staff. The Post’s John Wagner also reports on the changes.

CITY ARRESTS: A dozen Baltimore City employees were arrested on outstanding warrants for serious offenses after Mayor Stephanie Rawlings-Blake ran the employee database against a list of people wanted by the police, reports The Sun’s Julie Scharper.

BLOGGER LAWSUIT: Baltimore City Councilwoman Belinda Conaway is suing Examiner.com columnist Adam Meister for libel, claiming that a column he wrote is accusing her of living in Baltimore County and attempting to force her out of office, according to an Associated Press story in The Capital.

RUPPERSBERGER ON PHOTOS: After seeing about six photos taken of the body of former al-Qaida leader Osama bin Laden, U.S. Rep. C.A. Dutch Ruppersberger said that they prove the former most wanted terrorist is dead, reports the Sun’s John Fritze. WBFF has video.

HEALTH CARE CURRICULUM? U.S. Rep. Steny Hoyer wants colleges and universities in his district to also start teaching students about the benefits of the health care reforms passed by Congress last year, since many young people could take advantage of them, but don’t know much about it, writes The Sun’s Matthew Hay Brown.

FREDERICK PRAYS: The Frederick County Board of Commissioners passed a resolution to begin meetings with prayer from local religious leaders, reports the Frederick News-Post’s Meg Tully. The News-Post’s A.J. Messer has a video story about it.

BUTLER JOKES: After reports that O’Malley placed a classified ad looking for a new butler, members of the Maryland Republican Party added a few new job requirements of their own, reports The Sun’s Annie Linskey.

ALIEN INVADERS: State officials are in a constant and costly battle against non-native species of plants, animals and insects, particularly those that are invasive or destructive, Margie Hyslop writes in the Gazette.

WSSC RATES: Water and sewer bills in Montgomery and Prince George’s counties will be going up 8.5% as the Washington Suburban Sanitary Commission raises its rates, Margie Hyslop writes in the Gazette.

UNIVERSITY FUNDRAISING: Alan Brody in the Gazette writes about the fundraising challenges for top officials at the University of Maryland College Park.

SLOTS: In his Gazette column, Barry Rascovar writes that O’Malley should not have planned on the Anne Arundel slots revenues because of all the legal problems it had faced. 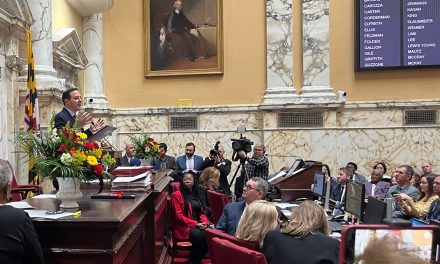