BUDGET OK: The House of Delegates gave initial approval yesterday for a state spending plan that closes a yawning deficit without raising taxes but would have Marylanders paying tens of millions more in extra fees, Annie Linskey reports for the Sun.

After nearly 4½ hours of debate, the full House gave preliminary approval to an overall state budget that is 2.8% higher than this year’s, writes Megan Poinski for MarylandReporter.com.

TEACHER COMPROMISE: In a compromise offer, the state’s largest teachers’ union has offered to go along with Gov. Martin O’Malley’s proposed higher pension contribution rate (5% to 7%), though the union would like the new rate to be phased in over two years, blogs the Sun’s Annie Linskey.

The Post’s Aaron Davis and Ann Marimow write that the Maryland State Education Association plan says it will achieve a federally recommended funding level of 80% for outstanding pension costs “two or three years after” the plans put forward by both the governor and the House.

RX CONTRACT: State officials have for a second time delayed approving a $2.4 billion contract to provide prescription drugs to state employees and retirees because of a pending appeal of the award, Scott Dance of the Baltimore Business Journal reports.

WIND PUSH: With lawmakers on the fence about one of his signature legislative issues this year, Gov. O’Malley went to the Annapolis City Dock to make the case that investing in offshore wind would help create jobs in the short term and stabilize energy rates over the long run, writes the Sun’s Julie Bykowicz.

WJZ-TV’s Kai Jackson reports on the controversy over O’Malley’s wind proposal and his continuing efforts to gain support.

WINE SHIPMENTS: Bills overwhelmingly approved by two legislative committees would allow shipments from wineries — but not from retail stores, blogs Ann Marimow for the Post.

Protests raised by the powerhouse liquor lobby led lawmakers to exclude retailers from the bill, Nick Sohr reports for the Daily Record.

GAS DRILLING: Natural gas drilling in western Maryland would be restricted until the state finishes a two-year study under a bill passed by House lawmakers yesterday, the AP’s Brian Witte writes in the Annapolis Capital.

DRINK TAX: Advocates who have been pushing for a dime-a-drink alcohol tax hike are now embracing a newly introduced 3% sales tax on beer, wine and spirits that would raise less than half of what they were seeking and would not be dedicated to health and disability services as they wanted, writes Len Lazarick for MarylandReporter.com.

DRUNK, NOT DRIVING: The Sun’s Michael Dresser writes that lawmakers are moving forward with two starkly different versions of legislation intended to increase the use of ignition interlock devices for convicted drunken drivers, setting up a possible impasse over a final bill.

Annie Linskey of the Sun blogs about the House version that offers judges another hammer to enforce drunken driving rules with the provision that requires extremely intoxicated drivers to use ignition interlock devices.

NEGLIGENT DRIVING: Meg Tully of the Frederick News Post reports that the House of Delegates is expected to vote on a bill that stiffens penalties for drivers who kill someone through “substantial negligence.” They would face up to three years in prison and a $5,000 fine.

UMS-HAGERSTOWN: A University System of Maryland funding showdown that could affect Hagerstown is developing in the General Assembly, Andrew Schotz reports for the Hagerstown Herald Mail.

CUTE LIGHTERS: Len Lazarick of MarylandReporter.com writes that debate lit up the Senate yesterday over an attempt to ban lighters shaped like objects that might appeal to youngsters. The bill is part of a national effort by fire marshals and fire chiefs to keep lighters out of the hands of children.

The Sun’s Julie Bykowicz blogs that the House Judiciary Committee voted down the novelty lighter restrictions yesterday afternoon, meaning the issue has probably flamed out for the year.

DELEGATE NEWS: The Sun’s Laura Vozzella writes that Del. Jill Carter’s home is on the city’s Bureau of Treasury Management long list of properties with delinquent taxes and municipal liens. But her house is there for an unpaid water bill. Further down, she writes that Dana Stein, a Baltimore County delegate and executive director of the nonprofit Civic Works, has written a novel about climate change called “Fire in the Wind.” He’s got a book signing coming up in April.

BWI CAB CONTRACT: About 30 airport taxi drivers filled the seats at the Board of Public Works yesterday to call attention to procurement problems at Baltimore-Washington Thurgood Marshall International Airport. Megan Poinski of MarylandReporter.com writes that the drivers inspired the board to unanimously cut the contract extension for the company they drive for, BWI Taxi Management Inc., from one year to 90 days.

BWI FIRE AID: Liam Farrell of the Annapolis Capital writes that a House proposal to have Anne Arundel County pick up the tab for help from firefighters at BWI airport is getting waved off by all sides.

DONATION CURBS: The Prince George’s County Council and county executive may face new restrictions on developer campaign contributions if a bill headed for the full House delegation is approved tomorrow, writes Miranda Spivack for the Post.

Lobbying by Prince George’s County Executive Rushern Baker helped persuade the delegates to support the ethics bill, despite criticism from lawmakers that it avoids “meaningful” reforms, Daniel Valentine reports for the Gazette.

BaCo BIZ FEES: Steve Schuster of the Towson Times writes that the House and Senate are expected to approve business fee hikes in Baltimore County proposed by County Exec Kevin Kamenetz to raise about $1.2 million.

GROUNDBREAKING DELAY: The groundbreaking for a new MARC railroad station on Southwestern Boulevard in Halethorpe slated to begin April 4 has been postponed indefinitely, writes Brian Conlin for the Arbutus Times.

CAMPGROUND DISPUTE: A dispute over services and fees at an Allegany County campground has sparked a bill in Annapolis over whether the campground should be considered a public utilities company because it provides water and waste services to a couple who lives there year-round, Andrew Schotz reports for the Hagerstown Herald Mail.

ASSEMBLY PAGES: Lauren Fulbright of the Howard County Times writes about Connor Croxson, one of 105 teens from across Maryland selected to serve as pages in the General Assembly. 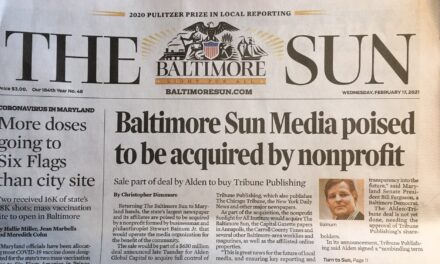