IMMIGRANT TUITION: Teenagers brought to this country illegally made emotional appeals to a Senate committee yesterday asking for passage of a bill to give them in-state tuition to state universities, writes Ann Marimow of the Post.

MarylandReporter.com’s Megan Poinski writes that under the bill they would qualify for in-state tuition if they attended a Maryland high school for at least two years, can prove that their parents or guardians have paid taxes and have applied to be legal permanent residents.

STARTUP SEEDS: The Post’s Aaron Davis reports that lawmakers, struggling with the centerpiece of Gov. Martin O’Malley’s jobs agenda, said they weren’t sure whether his plan to raise money for high-tech startups would create a much-needed economic boost or a costly boon to insurance companies.

O’Malley took the unusual step of testifying personally before Senate and House committees in support of the fund that he says would help Maryland entrepreneurs trying to find seed money Annie Linskey of the Sun reports.

Nick Sohr of the Daily Record writes that O’Malley would create the $100 million venture capital fund by selling tax credits.

GAY MARRIAGE: House leaders have scheduled a hearing on same-sex marriage legislation for Friday, Feb. 25. Assuming the bill hits the Senate floor early next week, its fate in that chamber could be known by then, reports John Wagner of the Post.

Citing his church and Southern upbringing Sen. Ulysses Currie, one of a handful of Maryland senators who had not declared a position on same-sex marriage, said that he intends to vote against the bill.

Elizabeth Marsh Cupino of the Frederick News Post offers a  short history of marriage in a what seems like a logical plea for gay marriage. Her column then lapses into silliness, saying that instead of marriage for gays “why not “garriage”? Most gay guys are named Gary anyway.”

ANTI-BUSINESS: Marvin Mandel and Ellen Sauerbrey tag-team an op-ed in the Sun to say that the General Assembly continues to trot out legislation that makes the state look like it is anti-business and could harm post-recession growth.

FINANCIAL LITERACY: State Comptroller Peter Franchot had some tough words for the state Department of Education, which estimated the cost to implement his proposal for a financial literacy course in all high schools at $16 million, blogs Len Lazarick of MarylandReporter.com. “The state bureaucracy spiked this thing. It’s a phony fiscal note.”

Responding to calls from farmers and builders groups, most Frederick County lawmakers are opposing a bill that would limit development in rural areas by banning septic systems, Meg Tully reports for the Frederick News Post.

DIME A DRINK: A proposal to raise tax rates on beer, wine and liquor is in the subject of a fight among legislators, activists and members of the brewing industry, writes Lauren Fulbright of the Catonsville Times.

BACK, THEN FORTH: The Sun editorial board writes that O’Malley’s newfound interest in closing one of the more glaring deficiencies in state law governing campaign donations is tempered by his desire to simultaneously loosen overall limits on political giving.

RAIL FUNDS: The Sun’s Michael Dresser blogs that he earlier had wondered whether O’Malley would pursue a share of the $2.4 billion in stimulus funds Florida Gov. Rick Scott turned down, essentially scuttling a high-speed rail project. The answer, he now says, is yes.

SLOTS RULES: The Sun’s Nicole Fuller blogs that the sponsor of legislation designed to prevent the state’s slots licensees from interfering in each other’s business ventures was the only person to testify before a state Senate panel considering the bill, and no questions were asked.

At this point, not only is Sawyer continuing to threaten a lawsuit, so are Republicans, writes Mary Gail Hare of the Sun.

WEARY IN PG: The Gazette’s Andrew Waite reports that, after the federal indictment Monday of former Prince George’s County Exec Jack Johnson, residents are growing weary of what one called a “polluted” culture but are split on whether Johnson’s wife, Leslie, should step down from her council seat given that more charges are pending.

And the Post’s Miranda Spivack reports that an ethics commission created by current County Exec Rushern Baker has run headlong into problems as he tries to clean up the county.

SUNDAY CAR SALES: A bill in the General Assembly that would allow Baltimore County car dealerships to conduct business on Sundays was introduced Jan. 31 by state Sen. Bobby Zirkin — then pulled less than two weeks later, after several car dealers said they didn’t want it, Steve Schuster reports for the Towson Times. 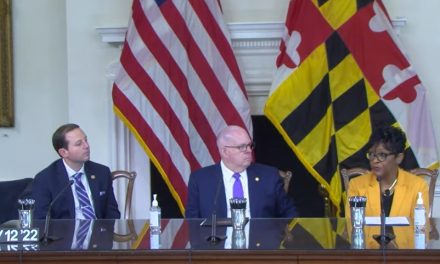