The race for Baltimore County Executive ended with a bang as Democrat Kevin Kamenetz and Republican Kenneth Holt sharply contrasted their positions at a forum Wednesday evening.

The candidates had a few sharp exchanges as they participated in the event’s question-and-answer format. Held at Stevenson University’s Greenspring campus, many in the standing room-only audience showed their preference by wearing candidates’ T-shirts, including candidates who’d been defeated in the primary election.

Holt, 59, a senior vice president at Morgan Stanley Smith Barney who served one term as a state delegate, said he had formulated a vision for the county in his 10 months of campaigning.

Holt said he would support legislation to restrict cell towers. Kamenetz pointed out that the county had enacted a restrictive cell tower law about 10 years ago, “and it’s worked so far.”

Holt said that if the General Assembly shifted the cost of the state teachers’ pension system from the state to the counties, as has been suggested, Baltimore County could absorb the cost, which he estimated at a maximum of $30 million per year. Kamenetz replied that if that happened, “every county in the state would have to raise taxes.”

Baltimore County has a balanced budget and a triple A bond rating, Kamenetz was proud to say. The county has avoided employee furloughs and layoffs, and has not raised the property tax or the individual tax rate.

“We are fiscally sound,” Kamenetz said.

Holt contended that county government could be streamlined, shaving 3 to 5%, or $80 million to $100 million, from the budget. He also argued for a streamlining of business regulations, saying that red tape discouraged companies from coming to the county.

“We have to make the county business-friendly. Our tax rate is higher than surrounding states like Virginia and Delaware by 17 to 38%,” said Holt.

The candidates were asked about the county’s Master Plan 2020, which guides planning and development for the next decade and to which communities are invited to submit their own “action plans.” Should the current County Council members vote on it, or should a vote be delayed until the new council members and County Executive are installed?

Again, the candidates’ differences were highlighted. Kamenetz said the current council members should vote on it since they are familiar with the issues in it. Holt disagreed, saying he was unhappy with many areas of the plan and, if elected, he did not want to be responsible for a document in which he had no say.

Just days before the general election, Democratic and Republican strategists are looking at the same data and coming to very different conclusions about the race.

In the race for county executive, the candidate has to be “a person of the street,” and relate to voters’ concerns like the fate of the older neighborhoods and the loss of jobs.

Campbell isn’t expecting a Republican sweep. “This is Maryland, after all,” he said. But he does believe that the national anti-incumbent sentiment and Holt’s own financial expertise will sway voters. Campbell called Kamenetz “a kind of incumbent” because of his long-time role in county government.

“There are going to be a handful of Republicans who will push through this cycle and Holt will be one of them,” Campbell predicted.

Sokol said that demographics are important in gubernatorial races, where people tend to vote along party lines. “But on local races like county executive, they vote for people they know and who know the local issues,” said Sokol, “and Kamenetz has shown that he does.”

“I’m expecting a win. Not necessarily a big win, but a win,” said Sokol. 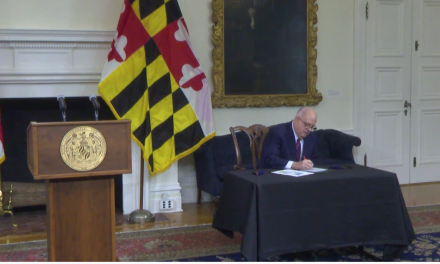 A session ‘we can all be proud of,’ Hogan, Busch, Miller agree