A version of this story first appeared in the June issue of The Business Monthly that came out Tuesday.

Anne Arundel County residents have been waiting a long time for Janet Owens to make up her mind about running against her successor John Leopold for a third term as county executive.

A poll she’s putting into the field next week will help Owens decide whether to try and reclaim the job she held for eight years.

“I’m really curious as to what the poll will say,” Owens, a Democrat, said Wednesday. “It’s going to be a big poll.” She wants to find out what people think about where the county is heading and whether they “want more of the same” or something different.

“I’ve had some ambivalence myself, but I’m not happy with the direction of the county,” she said in an earlier interview.

Owens doesn’t fault Leopold for the severe economic stress that has strapped all state and local governments, but said he has erred in allowing some defense contractors to be lured to Howard County.

“I do fault him for missed opportunities at Fort Meade,” she said.

Owens admitted that the financial situation of the county in upcoming years is “not pretty,” but noted that things were better on her watch.

“It took me eight years to get an $80 million surplus, and now the surplus is gone,” she said, along with the AAA bond rating gained only a few months after she left office. CORRECTION: The county maintained its AAA from Standard & Poor’s this year, but it was downgraded by Fitch’s Rating from AA+ to AA. Moody’s Investor Services maintained its Aa1 rating.

“I truly thought when I left office we had things ready for BRAC, but that is no longer the case,” Owens said, referring to the U.S. military base realignment and closure plan that is bringing thousands of jobs to Fort Meade.

Owens ran for state comptroller in 2006 and came in second in the Democratic primary to Peter Franchot in a three-way race with legendary ex-governor William Donald Schaefer. The Crownsville resident has been plenty busy since then, serving as chairman of the foundation for the professional schools at the University of Maryland, Baltimore. She is also on the board of the Central Maryland Regional Transit Corp.

Owens admits people have expressed frustration with her indecision, but on the other hand, “people say don’t do it unless you really want to do it.”

Few people are as critical as Joanna Conti, a Democrat who announced for executive in March and has been running since last year. Conti has a web site, a paid campaign manager, other consultants and a fundraising team — all of which Owens doesn’t have with the filing deadline fast approaching on July 6.

“The longer she waits the more support I’m gaining,” Conti said. “If you’re going to run, you have to have your heart in it. Janet does not appear to have her heart in it,” she said.

The rest of Len Lazarick’s Arundel report in The Business Monthly includes analysis of the call by John Leopold and Bob Ehrlich to give the Crownsville Hospital Center to Anne Arundel County. It also features the re-election announcements of legislative District 30 incumbents Michael Busch, John Astle and Virginia Clagett, proud of their combined 68 years in the General Assembly.

Mandel at 90: Being governor today is harder 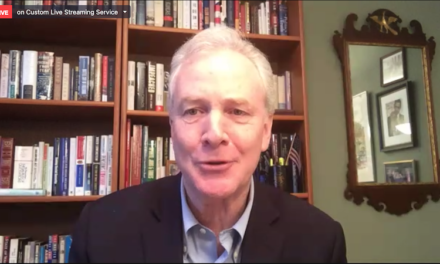