Sen. Barbara Mikulski has heard the chatter about her alleged retirement after a bad ankle break put her out of commission for months last year.

But the Democrat dismisses the bloggers as she mounts her campaign for a fifth term in the Senate.

“See this ankle,” Mikulski told a crowd of about 85 at an Ellicott City home Sunday. “I’ve got a lot of metal in it and I’m ready to kick butt.”

She is going to put “my metal on the pedal” for health care legislation and jobs bill. “I don’t want to be Hamlet,” said Mikulski, contemplating indecision. “I want to be Joan of Arc,” taking the fight to the insurance companies on health insurance reform.

“This is a tough climate and the electorate is pretty angry,” said Sarbanes. “We’ve got to make sure that they feel we’re listening” and “to remind people why they’re angry.” The anger, he said, stems from the economy, the health care mess, credit card abuse and other issues in which the government didn’t protect the citizens, Sarbanes said.

Cardin emphasized the need for government action, and the partisan nature of the opposition to health care reform.

“The obstruction is for the purpose of maintaining the status quo,” Cardin said. “They don’t want Barack Obama to have a victory.”

“We’re ready for the fight,” said Cummings, who represents about 70 percent of Howard County. Despite the nay-sayers, “we will pass a bill. Everybody agrees we have to do something. Starting over means doing nothing.”

In an interview at the event, State Democratic Party Chairman Susan Turnbull said all the Democratic incumbents running statewide – Mikulski, the governor, comptroller, attorney general – were running a unified campaign. “It is one team,” she said.

The party is better organized and better financed than it has been in a while, with $900,000 in the bank that will allow it to put 100 field workers on the ground throughout the state.

The first of those workers are in the 1st Congressional District to help re-elect first-term Congressman Frank Kratovil. “We anticipate that that’s going to be the most competitive race,” Turnbull said, as he faces a rematch with state Sen. Andy Harris.

Because “the campaign finance laws are fairly strict,” it’s only the state party that can really coordinate campaigns for federal and state office, she said. 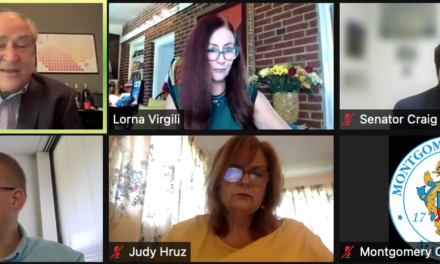