The Maryland Redistricting Reform Commission met Tuesday to craft recommendations for ways to fix gerrymandering in Maryland, focusing on establishing an independent group to redistrict both congressional and legislative districts. 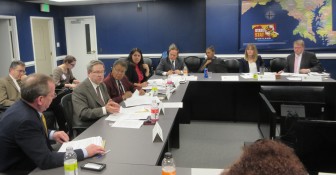 The commission hashed out intricate rules to limit partisan influence and ensure the independence of the new panel. The commission will recommend that any new independent commission apply current state standards for legislative districts to congressional redistricting.

When drawing congressional boundaries in the current system, Maryland’s governor leads the process, which follows a more general federal standard. These rules mandate that districts must be drawn with equal populations and in compliance with the Voting Rights Act, which prohibits racial discrimination in the voting process.

But when drawing state legislative boundaries, under Maryland law, districts must be contiguous and compact, “with due regard for natural boundaries and the boundaries of political subdivisions”.

In the past, minority lawmakers and political groups have complained that minority populations are split up and grouped together to help keep incumbent Democrats in power.

The commission held five public regional meetings in different parts of Maryland, hearing from legislators and residents about their ideas on how to reform voting districts.

Hogan in August signed an executive order creating the commission to address gerrymandering in both legislative and congressional voting districts. The governor wanted the commission to formulate a new independent, bipartisan commission.

Shape of the proposed commission

The commission is recommending a new, nine-member group, made up of three Democrats, three Republicans and three independents.

The commission is recommending that a panel of three judges — one judge from the Court of Special Appeals of Maryland and two from the Maryland Circuit Courts —  be chosen at random to select the members of the group.

The judges will choose 30 people — 10 Democrats, 10 Republicans and 10 independents from the pool of applicants — to possibly serve on the work group.

From those 30, nine individuals will be randomly chosen, with three from each political affiliation, to become members of the independent redistricting panel.

Sen. Joan Carter Conway, a member of the redistricting commission, said that focusing on creating an independent group to redistrict Maryland is not possible since everyone involved has some political connection, such as the governor’s role of appointing judges and the legislature’s role in confirming them.

Members of an “independent redistricting commission are as far from independent as the legislators are,” said Conway, D-Baltimore City.

Judge Alexander Williams, co-chair of the commission, had favored giving legislative leaders of both parties a say in appointing four members of any new commission, but other members of 11-member of the redistricting reform commission rejected the idea.

As she did last week, Conway emphasized that the commission should do something to fix congressional districts but avoid the legislative districts.

Redistricting occurs every 10 years following the results of the U.S. census. In 2012, Gov. Martin O’Malley, D, redrew the 6th congressional district, taking away conservative voters in order to oust a veteran Republican congressman.

Seven of the state’s eight seats in the U.S. House of Representatives are now held by Democrats.

The commission must submit a report to the governor, Senate President Mike Miller and House Speaker Michael Busch by next Tuesday, when the members will take a final vote on their work.