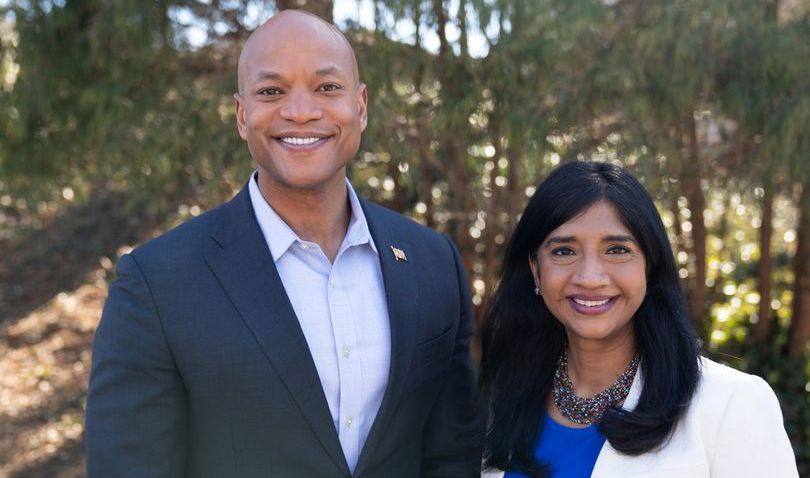 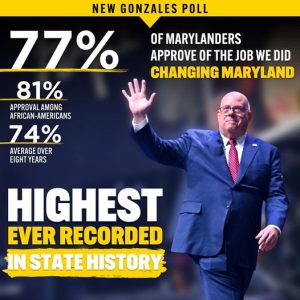 Outgoing Gov. Larry Hogan posted on his Facebook page this image, writing, ‘On our final full day in office, I am incredibly humbled that every single demographic in our state overwhelmingly approve of how we have changed Maryland for the better. Serving you has been the honor of a lifetime. Thank you!’

HOGAN, OTHERS REFLECT ON HIS LEGACY: When Larry Hogan was first sworn in as governor of Maryland, he said,“One hundred years from now, I want Marylanders to say: ‘This was when Maryland’s renaissance began.’” Now, eight years later, when the Republican governor of a blue state was asked about that promise, Hogan had no doubt he’d done just that. “There’s no question about it from an economic standpoint. We’re in the best shape we’ve ever been in history, and we were in the worst shape ever.” Pamela Wood/The Baltimore Banner.

MOORE INAUGURATION AT NOON: Gov.-elect Wes Moore will be inaugurated as the state’s 63rd — and first Black — chief executive in a historic ceremony at the Maryland State House in Annapolis this afternoon. A first-time holder of public office, Moore will have a steep learning curve as he pulls up a chair to the governor’s desk. But he has a wealth of experience in public service and from the private sector to pull from and allies in the General Assembly to help guide the way. Hannah Gaskill/The Baltimore Sun.

MOORE PROMISES TO GOVERN DIFFERENTLY: Gov.-elect Wes Moore’s Cabinet choices so far signal that he may deliver on his promise to govern differently than the status quo, but observers say only time will tell if that will last. Michael Charles of Capital News Service/Maryland Reporter.

AS MOORE TAKES OATH, BLACK LEADERS REVEL IN PROSPECT FOR FUTURE: Some Black leaders say Wes Moore’s election to governor marks an achievement for Black voters and residents to see someone in a leadership position who “looks like them.” Sen. Antonio Hayes (D-Baltimore City) puts Moore’s election in November in this historical context: He is the third African American in the nation ever elected governor. William Ford/Maryland Matters.

BALTIMORE’s FIRST ELECTED BLACK MAYOR ON ‘FIRSTS’: Kurt Schmoke acknowledges that when he entered City Hall in 1987, he not only faced the daunting task of running the corporation that is the City of Baltimore, but also lived with the additional silent scrutiny that came with being the city’s first elected Black mayor. Since then, the parade of “firsts” has lost some of its novelty with the election of Barack Obama as president and the election of Black governors in Virginia and Massachusetts. But Marylanders are still talking about the race factor, and reporters are still writing stories about “firsts,” including Gov.-elect Wes Moore, who will become Maryland’s first Black governor at noon today. William Zorzi/Maryland Matters.

FOR BLACK VOTERS, MOORE IS A POINT OF PRIDE: It’s a point Wes Moore made dozens if not hundreds of times while asking for votes last year: He wasn’t running to make history. But for many Black voters who helped lift Moore to victory, this moment — as he prepares to take his oath on a Bible that belonged to the abolitionist Frederick Douglass, who was born enslaved in Maryland and died free — is one of pride and great expectations. Ovetta Wiggins, Erin Cox and Lateshia Beachum/The Washington Post.

EXPECT A CELEBRITY-FILLED INAUGURATION: During Wes Moore’s historic inauguration as the state’s first Black governor, expect a slew of national journalists, high-powered politicians and even a Bravo star or two to celebrate. The attention Moore has received from celebrities and on the national stage is unlike anything Maryland has experienced before, according to Goucher Professor Mileah Kromer, John-John Williams/The Baltimore Banner.

POST BIDEN: THERE IS WES MOORE: As Democrats wring their hands about who might run — and win — once Joe Biden leaves office, Maryland Gov.-elect Wes Moore emerges as if he were created in a political lab: a person of color who rose from poverty and served in combat. A Rhodes scholar and best-selling author on Oprah Winfrey’s radar. And through his work on Wall Street and the Robin Hood Foundation, he boasts a network of celebrity and hedge fund contacts. Moore has another trick up his sleeve. He embraces traditional Republican issues such as crime and the economy, a tactic that led him to the statehouse and offers his party a national blueprint for success. Christian Hall and Mario Parker/Bloomberg News.

KEY SENATOR’s SUPPORT BOOSTS BILL FOR SEX ABUSE SURVIVORS: The chair of a powerful state Senate committee will sponsor his chamber’s version of a bill to end a statute of limitations on child sex abuse lawsuits, giving a boost to legislation abuse survivors have been pushing for years. The decision announced Tuesday by Democratic Sen. Will Smith of Montgomery County, chair of the Judicial Proceedings Committee, improves the legislation’s chance of getting passed this year in the General Assembly. Hannah Gaskill/The Baltimore Sun.