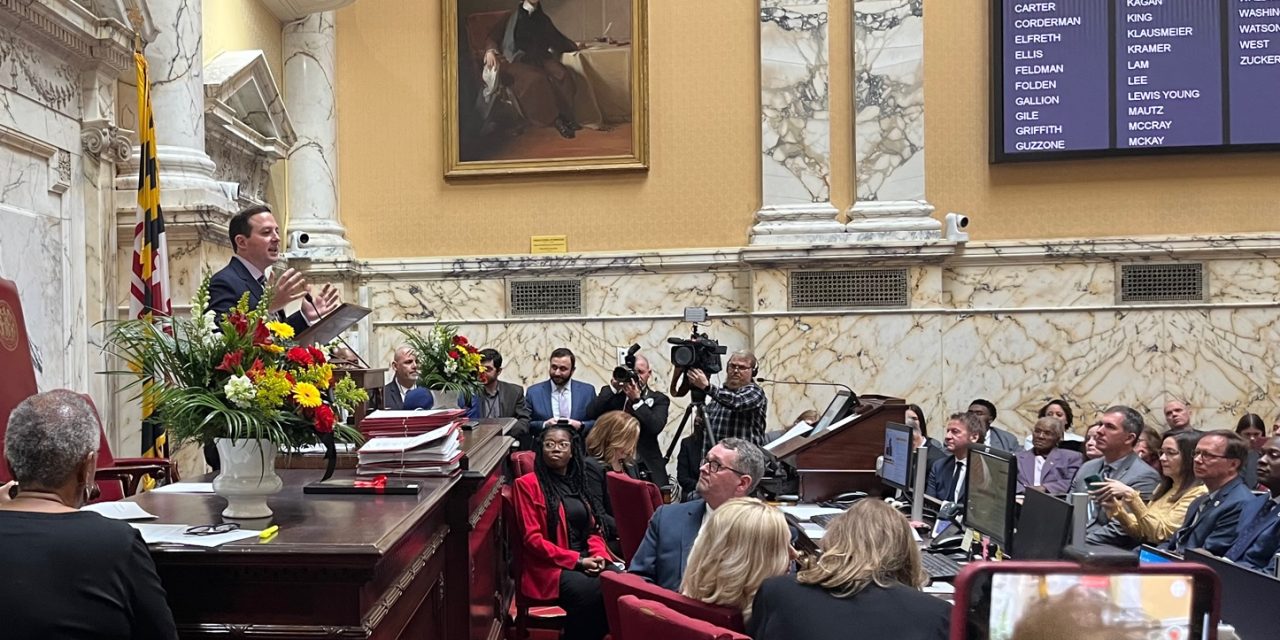 WITHOUT COVID RESTRICTIONS, OPENING DAY IS FAMILY DAY IN ANNAPOLIS: Maryland’s elected officials, along with their family and friends, swarmed the halls of the historic State House in Annapolis on Wednesday to kick off the 445th session of the Maryland General Assembly. Hannah Gaskill and Sam Janesch/The Baltimore Sun.

MOORE TARGETS CHILD POVERTY AMONG PRIORITIES: Gov. elect Wes Moore, speaking during the Eye on Annapolis Summit just hours before the start of the 2023 General Assembly session, said ending child poverty will be among his top priorities. He said he will work toward ensuring housing availability for low-income individuals and improving public transportation. Steve Lash/The Daily Record.

SEN. LEE TAPPED AS NEXT SECRETARY OF STATE: Gov.-elect Wes Moore (D) announced Tuesday that he is nominating state Sen. Susan Lee (D-Montgomery) to be Maryland’s next Secretary of State — setting off a new cascading set of legislative dominoes. Lee, who has been a political trailblazer for more than 20 years, would become the first Asian-American secretary of State in Maryland history. Josh Kurtz/Maryland Matters.

CARROLL’s ALL-GOP DELEGATION OPTIMISTIC ON WORKING WITH MOORE: The all-Republican delegation representing Carroll County is heading to Annapolis optimistic they’ll be able to work with a governor of a different political party. “Well, I think it will be different,” said Sen. Justin Ready, 40, who represents District 5. “I’m hoping we can work together on the state’s big issues, such as the cost-of-living, inflation. How do we make sure it’s affordable for people living here, and doing business here?” Sherry Greenfield/Carroll County Times.

SWORN INTO OFFICE; FREDERICK DEL. PIPPY NOW MINORITY WHIP: Members of the Maryland General Assembly, including the 15 lawmakers who make up Frederick County’s delegation, were sworn into office in Annapolis on Wednesday as the 2023 legislative session commenced. The Maryland House Republican Caucus elected Del. Jesse Pippy, R-Frederick, to serve as the minority whip in the House of Delegates. Jack Hogan/The Frederick News Post.

SEN. CARTER TO ‘CLARIFY’ JUVENILE CRIMES BILL: Sen. Jill Carter plans to amend language of a law that prohibits children under the age of 13 years old from facing criminal charges, unless they commit serious offenses. It has faced criticism from Anne Arundel County Police, which says it ties their hands. “Law enforcement is incorrect – they have tools,” Carter said. “I’m looking do some legislation to clarify what processes should happen in the event a child is accused of an act that would be a crime.” Mikenzie Frost/WBFF-TV.

HOGAN OK’s VEHICLE INSPECTION SCHEDULE TO EVERY SIX YEARS: Despite opposition from Democratic state lawmakers and legislative analysts, Gov. Larry Hogan approved changes to Maryland’s vehicle emissions inspection program on his way out of office. The regulatory change — which came to light in 2021 as the state sought a new contractor to handle vehicle inspections — would lengthen the amount of time before new cars need to be inspected by the state from three years to six, among other alterations. Christine Condon/The Baltimore Sun.

FORMER DEL. JALISI HIT WITH FRAUD COMPLAINT: Charges of fraud, unjust enrichment and breach of contract in a real estate deal marks the latest controversy to swirl around an outgoing Baltimore County delegate. Hasan M. “Jay” Jalisi, whose eight years representing the Randallstown-Reisterstown 10th District ended Wednesday with the start of a new legislative session, was slapped with a complaint by a Bethesda title company last Friday. Mark Reutter/Baltimore Brew.

CALVERT OFFICIALS APOLOGIZE FOR HIGH WATER BILLS: Calvert County officials on Tuesday apologized profusely to residents surprised by massive water bills at the end of the year — many more than $8,000 — resulting from an audit of county-set limits on water use. Katie Shepherd/The Washington Post.

CAUSE OF FORMER HOWARD SCHOOL SUPER’s DEATH QUESTIONED: An investigation into the death of former Howard County School Superintendent Michael Edward Hickey and a review of  documents obtained by this publication tells a different and troubling story. The cause of his recent death was not “Parkinson’s disease and other complications,” as The Baltimore Sun reported in September. His death also did not occur at Chestnut Grove Assisted Living. Bryan Renbaum/The Baltimore Post-Examiner.

COMPLAINTS AGAINST CITY POLICE BACK UP; OVERSIGHT BOARD STILL IN WORKS: A backlog of hundreds of complaints about Baltimore police officers continues to grow each week as city officials make their final push toward setting up a new citizen-led oversight board. The board was mandated in 2021 by the General Assembly, a police reform package passed that directed each county and jurisdiction to implement the new layer of oversight. Baltimore City’s will be one of the last police accountability boards in the state to get up and running. Ben Conarck/The Baltimore Banner.