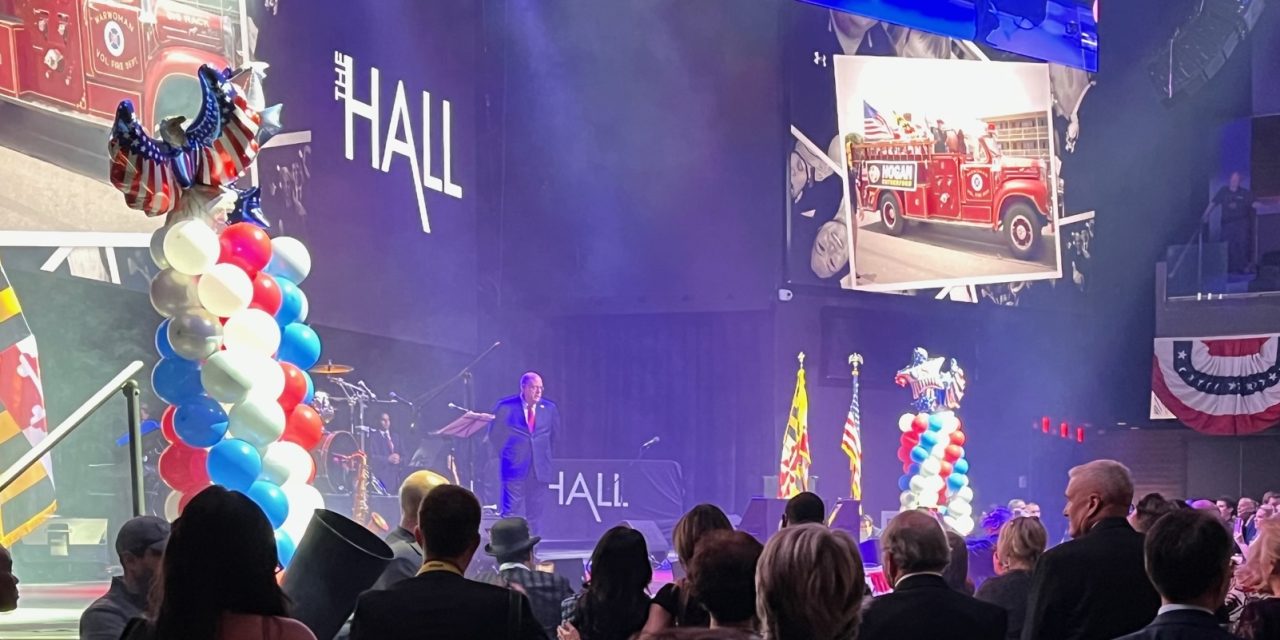 Gov. Larry Hogan addresses a crowd of more than a thousand at Live! casino Wednesday night, raising money for his continuing political activities. MarylandReporter.com photo by Len Lazarick. (All MarylandReporter.com content is available for use under a Creative Commons license.)

HOGAN @ GALA: NOT MAKING ANNOUNCEMENT TONIGHT: Gov. Larry Hogan, stopping short of announcing an upcoming run for president or even an exploratory committee, told supporters Wednesday he’s “never been more concerned about the direction of our nation” and would make a decision about a potential campaign after he leaves office. Sam Janesch/Baltimore Sun

MOORE PREPARING FOR GOVERNOR’S MANSION MOVE, HAS PLANS FOR PUPPY: Gov.-elect Wes Moore is preparing to move to the governor’s mansion in Annapolis, and the move will come with a puppy that he promised for his two kids, 9 and 11, a year and a half ago. Jack Moore/WTOP (Most news content on broadcast stations like this is not behind a paywall.)

SCOTT VETOES PENSION BILL AFTER ETHICS CONCERNS FLAGGED: Baltimore Mayor Brandon Scott has vetoed a bill that would make the city’s elected officials eligible for a pension after eight years instead of the current 12. Emily Opilo/Baltimore Sun

MOCO WILL REQUIRE NEW BUILDINGS TO BE ELECTRIC: The Montgomery County Council took a step toward an all-electric future Tuesday, unanimously passing a measure to require new buildings to be nearly all-electric by 2026. Joel McCord/WYPR (As a public nonprofit radio station, WYPR is not behind a paywall.)

EZ-PASS DEADLINE EXTENDED: Maryland E-ZPass customers who owe back tolls have more time to settle their outstanding balance. The deadline to pay the tolls without penalties was Wednesday night, but the Maryland Transportation Authority called a special board meeting in the afternoon to address the customer assistance plan. The board voted to extend the deadline by two weeks until Dec. 14. Jenyne Donaldson/WBAL-TV

OPINION: COX FAILED SPECTACULARLY: The results of the Maryland gubernatorial election have been certified. And we have an even better picture of just how badly Dan Cox performed in the general election. In 2022, Dan Cox received the lowest raw vote total for a Maryland Republican gubernatorial nominee since William Shephard in 1990. Brian Griffiths/The Duckpin