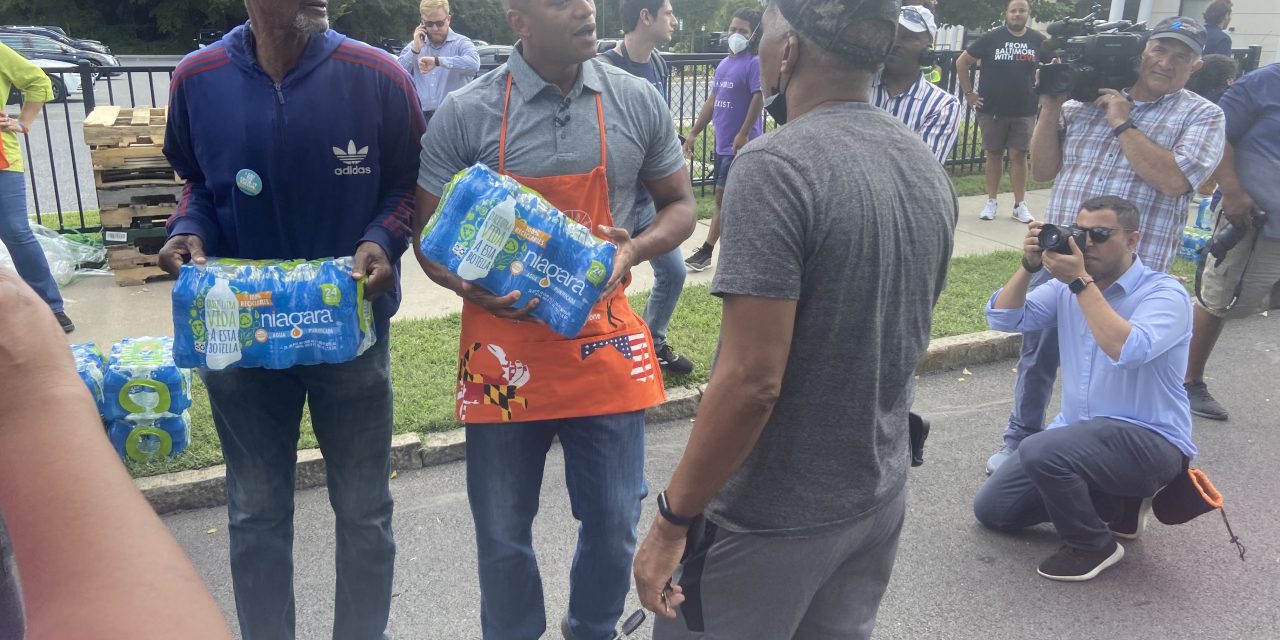 Democratic gubernatorial candidate Wes Moore talks with residents of the Sandtown-Winchester neighborhood that have been under a boil water advisory since E. coli was discovered in their drinking water. Moore helped distribute water donated by Home Depot and talked about how he would guard against such issues if elected governor. (Timothy Dashiell/Capital News Service)

By Timothy Dashiell and Shannon Clark

Residents of the city’s Sandtown-Winchester and Harlem Park communities have been under a boil water advisory since E. coli was discovered by health officials over the Labor Day weekend.

On the corner of Pennsylvania Avenue and Reisterstown Road, residents from the neighborhood lined the street leading to the entrance of the Deliverance Temple Sanctuary Ministries, where Cox and his supporters were handing out cases and gallons of water on the side of the church.

Water at the Cox donation stations was provided by the churches, Republican candidates and Cox supporters. As Cox juggled press interviews and shook hands with residents, he said his work starts now in addressing Baltimore’s water crisis.

“We are doing what we can on a small scale to provide some of the local people in the community free water until this is fixed and ameliorated,” Cox said. 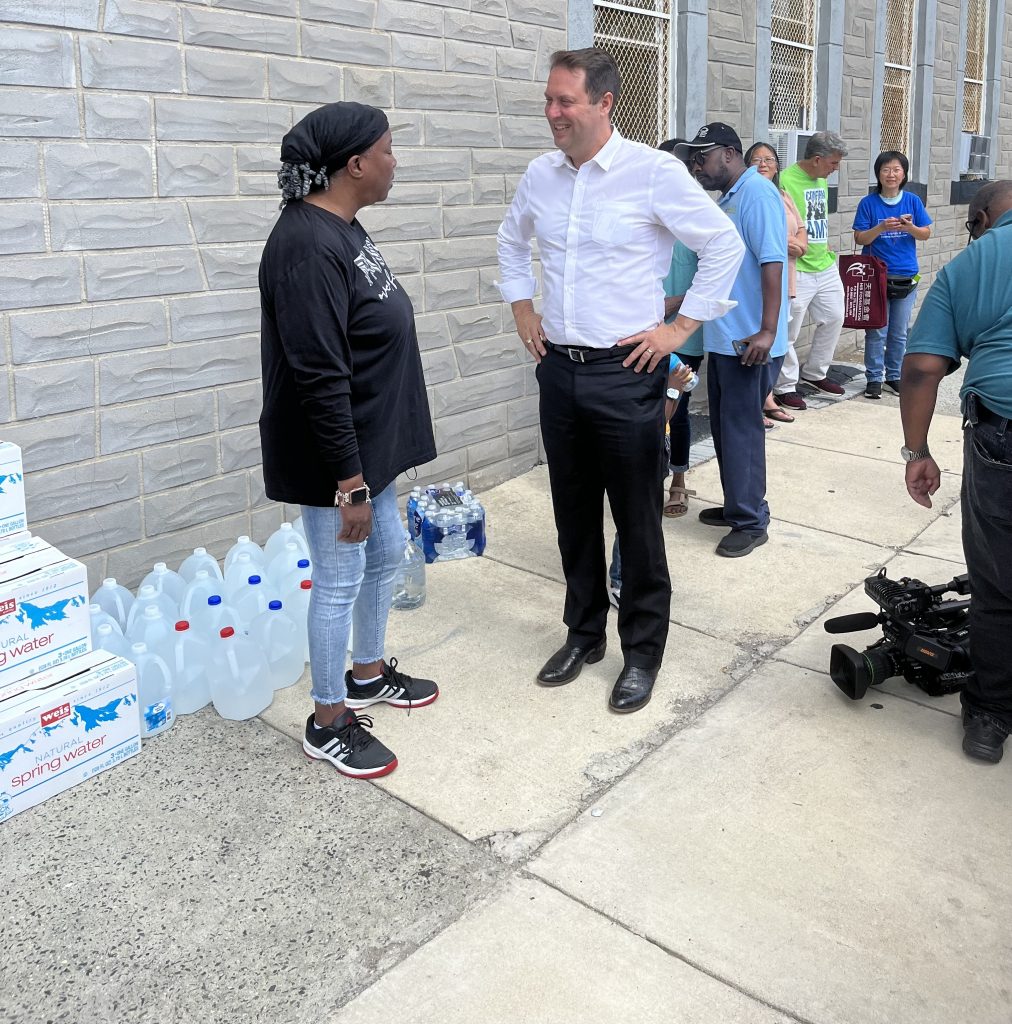 Cox said if he is elected, he would address the management of the Baltimore water and sewage systems and more closely monitor the source of the city’s drinking water. He said he would also seek more input from residents on what they see in their communities that needs to be fixed.

Baltimore City Department of Public Works issued a boil water advisory on Monday, following the results of tests that were done Saturday on the city’s water supply. Gilles Lee, 67, said he drank the potentially contaminated water over the weekend.

“I drank some of it, but I haven’t had any side effects yet,” Lee said. “As much as they charge us for water, they should have some type of warning condition in place. This could have killed somebody.”

Cox finished campaigning in Baltimore Thursday with another visit to water donation site, the second at Simmons Memorial Baptist Church,

Just over a mile from where Cox was meeting residents, Moore joined other community leaders and volunteers to distribute cases of water provided by Home Depot to Baltimore residents impacted by the recent E. coli contamination.

“Now my kids can take a bath in water that’s actually clean,” one resident shouted with a smile on her face as Moore loaded a case of water into her car at Wylie Funeral Home at North Mount Street and Harlem Avenue.

Moore said that as governor, he and his team will act swiftly and have boots on the ground ready to assist residents in times of crisis.

“You have to deal with the fact that there are people right now who need and deserve better,” Moore said, “so watching this, watching elected officials, nonprofits all saying our community deserves better right now is why we’re here today.”

Moore and city council officials said the state should use federal funds to improve Maryland’s infrastructure.

“We have billions of dollars that are coming to the state of Maryland for transportation and infrastructure, and we’ve got generational problems that we still have not addressed,” Moore said.

“Some of the federal infrastructure money could be very helpful because we have a lot of older pipes of older infrastructure, and so we could use some of that money to actually do some retrofitting and upgrading of our systems,” Bullock said.

In an update Wednesday night, Baltimore Mayor Brandon Scott and city officials lifted the water boil advisory for areas south and southwest of Route 40 after samples came back negative for E. coli contamination. The advisory is still in effect for neighborhoods in West Baltimore north of Route 40.

The city provided three locations where the Department of Public Works would be distributing water Thursday.  Locations for water distribution are provided daily,

Water contamination has been an issue for residents of Baltimore communities for some time. City and state officials have come under fire from residents and advocacy groups, with many describing the city’s water and sewage system as aging and claiming that water main breaks and sewage leaks are common and lead to water contamination.

“It’s been like this my whole life,”, Sandtown resident Elijah Harris, 38, said in an interview with Capital News Service. “Back then, it was that it was lead paint in the water.  Now this E coli, the water is being poisoned and it seems like nobody is doing anything about it.  They don’t care.”

Hogan turns 60, a man of many hats