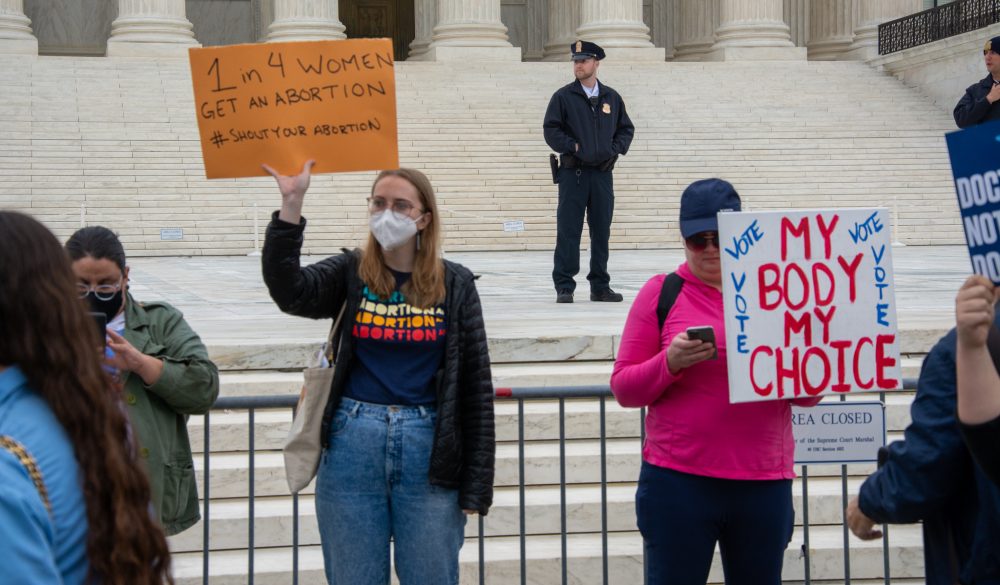 WASHINGTON - Abortion rights advocates demonstrated in front of the Supreme Court Tuesday after a leaked draft of a decision indicated a majority of justices are ready to overturn Roe v. Wade, the landmark 1973 ruling that legalized abortion. (Chris Barylick/Capital News Service)

ABORTION RIGHTS ACTIVISTS IN MARYLAND PREPARE: The Supreme Court upended a half century of precedent when it overturned the landmark Roe v. Wade decision that made abortion a constitutional right, shifting the onus to states such as Maryland to decide whether such services are legal. Meredith Cohn, Hannah Gaskill, Christine Condon and Jeff Barker/The Baltimore Sun.

PUBLIC REACTION: After the Supreme Court overturned Roe v. Wade, hundreds flooded the streets of Baltimore to protest the decision. “It’s hard to put what I feel into words that are cohesive,” said Israel. “It seems like everything is collapsing and there really seems like there’s no way out.” Gabe Dinsmoor and Emma Patti Harris/The Baltimore Banner.

OPINION: IT’S NOT ABOUT THE CHILDREN: You can’t believe that lives are sacred in the womb but don’t deserve health care while in the hospital with their families after birth. You can’t consider that womb a sacred vessel and deny the person whose body it is the services they might need to care for their child. If you did, you’d believe in universal healthcare. In not gutting government benefits of their parents. In raising the minimum wage. In affordable housing. In safe schools. Leslie Gray Streeter/The Baltimore Banner.

LGBTQ+ PEOPLE ON ALERT: Dozens of people attended the Baltimore Pride Parade Saturday, marking a joyous reunion for the queer community after a two-year hiatus due to the COVID-19 pandemic. While attendees danced and cheered as the parade marched by, some expressed concern over the future of gay rights given recent opinions from the Supreme Court. Ngan Ho/The Baltimore Sun.

MARYLAND MAY HAVE TO ALTER GUN CARRY LAW: The Supreme Court’s ruling Thursday that Americans have a right to carry a handgun outside the home for self-defense — striking down a New York law that made it illegal to carry a gun in public without proving there was a special need for protection — could mean Maryland will have to change its own similar law. Karina Elwood/The Washington Post.

WES MOORE, PROFILE OF A CANDIDATE FOR GOVERNOR: Wes Moore has built up a diverse resume over his career, serving in the military, as an investment banker, a best-selling author, an entrepreneur and the chief of a large charity. All of those stops along the way have prepared him, he says, for what he hopes is his next title: governor of Maryland. Pamela Wood/The Baltimore Banner.

VOTERS CONCERNED ABOUT INFLATION, GAS COST: They’ve outlined lofty visions for increased wages and tens of thousands of new jobs. They’ve talked about investments in transportation, education and small businesses. But among all the policy plans and stump speeches from Maryland’s candidates for governor, the most pressing economic concerns of voters this year are seldom mentioned. Sam Janesch/The Baltimore Sun.

MD DEMS MAKE PITCH FOR EARLIER PRIMARY: Maryland Democratic Party officials made their pitch to the national party this week to become one of the first states to kick off the 2024 presidential nominating process, competing against Iowa, New Hampshire and more than a dozen other states as the Democratic National Committee considers reshuffling its contest order. Ovetta Wiggins/The Washington Post.

STATE LIFTS COLLEGE DEGREE REQUIREMENT FOR MANY POSITIONS: With record numbers of state jobs going unfilled since the height of the COVID-19 pandemic, Maryland was in a bind. So, officials decided to eliminate the four-year degree requirement for thousands of those jobs—from parole agents to information technology specialists to nursing assistants—becoming the first state to do so. In the current tight labor market, Maryland is not the only state engaged in a desperate search for government employees. Elaine Povich of Stateline/Maryland Matters.

HIGH COURT GIVES OK TO POLICE WHO SNIFF TO STOP: A sharply divided Maryland high court ruled this week that police officers may briefly stop and question a person who smells of marijuana though possession of less than 10 grams of the drug is not a crime in the state. Steve Lash/The Daily Record.

WASHINGTON COUNTY STILL DOWN 100 ELECTION JUDGES: With early voting nearly two weeks away, the Washington County Board of Elections still faces an election judge shortage. Previously, the county board of elections was 188 election judges short in order to run, comfortably, about 49 election sites. Barry Jackson, deputy director of the county elections board, told The Herald-Mail in a telephone interview the board remains 100 election judges short of the number sought. “We’re moving in the right direction, but … we still do need people,” Jackson said. Michael Garcia/The Hagerstown Herald-Mail.

A MARYLAND ELECTION JUDGE’s UNIQUE PERSPECTIVE: When Ukrainians went to the polls in 2019 and elected President Volodymyr Zelenskyy, a Maryland election judge was there to observe the democratic process play out. Todd Becker of Salisbury has observed foreign elections for decades with the Organization for Security and Co-operation in Europe, giving him a unique perspective on the state of elections now under fire for everything from unfounded claims of fraud to pandemic-related changes. Dwight Weingarten/The Salisbury Daily Times.

TOM GRAHAM, FORMER EXEC EDITOR OF PPC, DIES: Thomas M. “Tom” Graham, former executive editor of Patuxent Publishing Corp.’s newspaper, died Wednesday on his 48th wedding anniversary from complications of cancer at his Columbia home. He was 71. Jean F. Moon, former editor of The Columbia Flier, said, “We all regarded him as an editor who had the capacity to generate affection for the people who worked for him. He was a beloved editor, not a sentimental man, but a man who earned respect.” Fred Rasmussen/The Baltimore Sun.