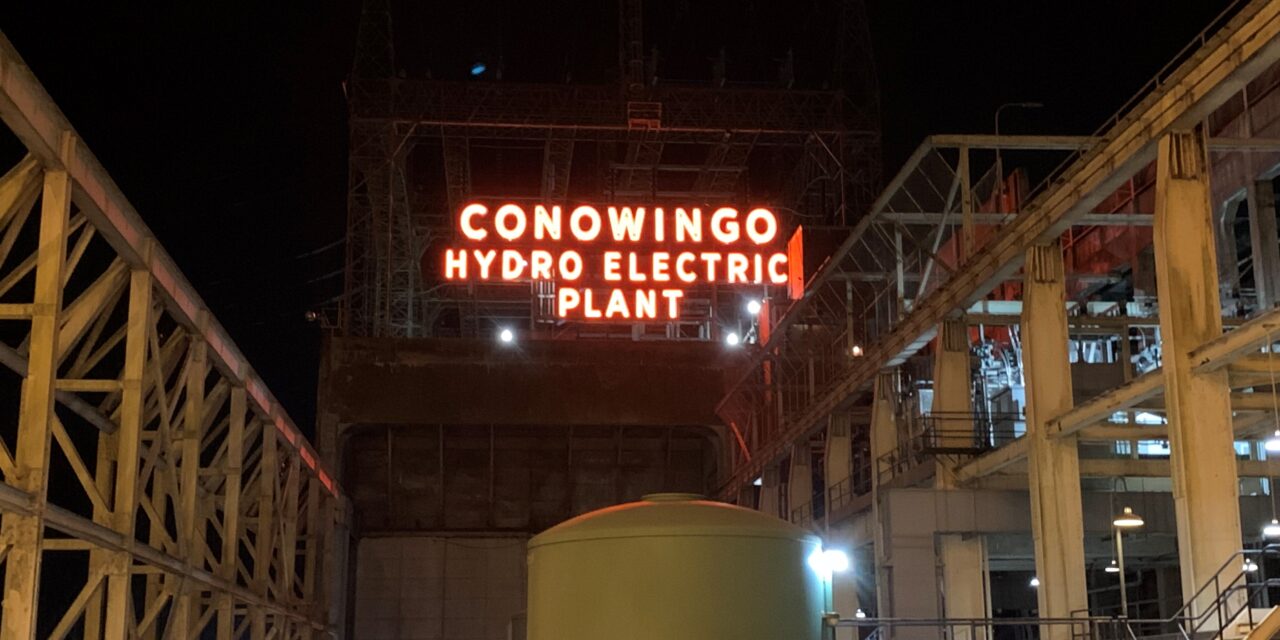 On New Year's Day, LED lights replaced the neon sign at the Conowingo Dam on the Susquehanna River. Photo courtesy of Exelon Corp.

LEADERS SEEK TO KEEP SCHOOLS OPEN DURING COVID SURGE: Maryland’s school leaders appear determined to keep schools open through a surge in cases of the omicron variant of the coronavirus after many of their students endured one of the longest shutdowns of any state in the nation during the pandemic. Liz Bowie/The Baltimore Sun.

STATE GETS 1st SHIPMENTS OF LIFE-SAVING ANTIVIRAL DRUGS: Maryland has received its first shipment of two new antiviral medicines that may protect people infected with Covid-19 from becoming seriously ill or dying, state health officials announced Friday. The drugs are given to already infected patients in the form of pills that are taken over a five day period and treatment must start as soon as symptoms appear. Mary Carole McCauley/The Baltimore Sun.

FIVE STORIES TO WATCH IN 2022: What are the five stories that could dominate the headlines in 2022? Will pandemic shutdowns return? Who will the state elect as the next governor? And … Bryan Renbaum/MarylandReporter.com.

RACES TO WATCH IN 2022: What races are those to watch in the coming year? Of course, the governor’s race, where a few surprises certainly may be in store along with the usual suspects. And the comptroller’s race should be interesting. Then we have a bunch of races for county executive. What is happening there? A baker’s dozen to watch. Josh Kurtz/Maryland Matters.

ELRICH TESTS POSITIVE FOR COVID: Montgomery County Executive Marc Elrich announced in a statement Saturday that he has tested positive for COVID-19. In the statement, Elrich said his symptoms were mild and he was “just feeling tired. I am grateful to be vaccinated and boosted.” Zeke Harner/WTOP-FM.

PROBE TO BEGIN INTO FORMER STATE MEDICAL EXAMINER: The Maryland Attorney General’s Office this year is expected to begin its review of autopsies of people who died in police custody during the 17-year span that former chief medical examiner David Fowler served, a first-of-its-kind probe sparked by Fowler’s testimony in defense of the Minneapolis police officer on trial for murder in the death of George Floyd. Ovetta Wiggins/The Washington Post.

MINIMUM WAGE HIKE AMONG NEW LAWS: Maryland’s minimum wage rate will increase to $12.50 at employers with 15 or more employees. The Maryland Board of Physicians will require a license for genetic counselors and establish a committee for professionals. Staff/WTOP-FM.

WE’RE VERY GRATEFUL: We made it. MarylandReporter’s two-month matching grant donation period ended Friday. We’re happy to report that we had a record number of donors – over 300 — and our contributions plus grant matches totaled $47,000. That will help us keep covering the news in 2022. If you contributed, thank you. If you didn’t, while your donation won’t be matched, it still helps us “keep up the good work” as many of our donors say. Make a tax-deductible contribution today.

HIGHER RENTS WORRY PURPLE LINE OBSERVERS: Even as most construction on Maryland’s Purple Line stalled for the past 16 months, a group of academics, housing advocates, companies and nonprofits has continued to try to prevent the rail line from pricing out the residents and businesses it is intended to serve. Katherine Shaver/The Washington Post.

COVID DEPLETED MEDICAL CARE WORKFORCE: With even more contagious strains of COVID-19 running rampant, a depleted workforce is all that’s left to care for Maryland’s sick. Under the shadow of this seismic wave of infection, the demands are just as, if not more, crushing, but the gratitude of waves past is gone, said Dr. Gabor Kelen, director of the department of emergency medicine at Johns Hopkins Hospital. Hallie Miller/The Baltimore Sun.

ON TRANSFORMING I-270, BELTWAY CONGESTION: Australian toll road operator Transurban is designing toll lanes for Maryland’s Interstate 270 and part of the Capital Beltway to create a regional network of express toll lanes with those in Northern Virginia. At the helm is 39-year-old Pierce Coffee of McLean, Va., who spoke about Transurban’s work in the Washington region and why the company thinks it can alleviate the area’s crippling traffic congestion. Katherine Shaver/The Washington Post.

IN MO CO EXEC RACE, ELRICH HAS ‘STRONG FAVORABLES:’ In six months, Montgomery Democrats will decide whether Marc Elrich deserves a second term as county executive. Early polls show that Elrich has expanded his base of support. According to a source who has seen multiple polls — including one conducted for a consortium of unions and another for a business group — Elrich enters the campaign with “strong favorables” and support in the “high 30s.” Bruce DePuyt/Maryland Matters.

DEM SEEKS TO UNSEAT GOP DELEGATE IN 30B: Though running for the District 30B seat in the Maryland House of Delegates to unseat Republican Seth Howard would technically be Democrat Courtney Buiniskis’ first foray into politics, she said helping those in need in her neighborhood is something she has been doing for years. Dana Munro/The Capital Gazette.

WHATEVER HAPPENED TO DAN BONGINO? Dan Bongino ran for U.S. Senate and Congress when he lived in Anne Arundel County. He ran again for Congress in Florida. He’s now taken over the time slot and radio talk-show audience once held by Rush Limbaugh, with millions of listeners.  Evan Osnos/The New Yorker. (Bongino appears on WMAL radio weekdays.)