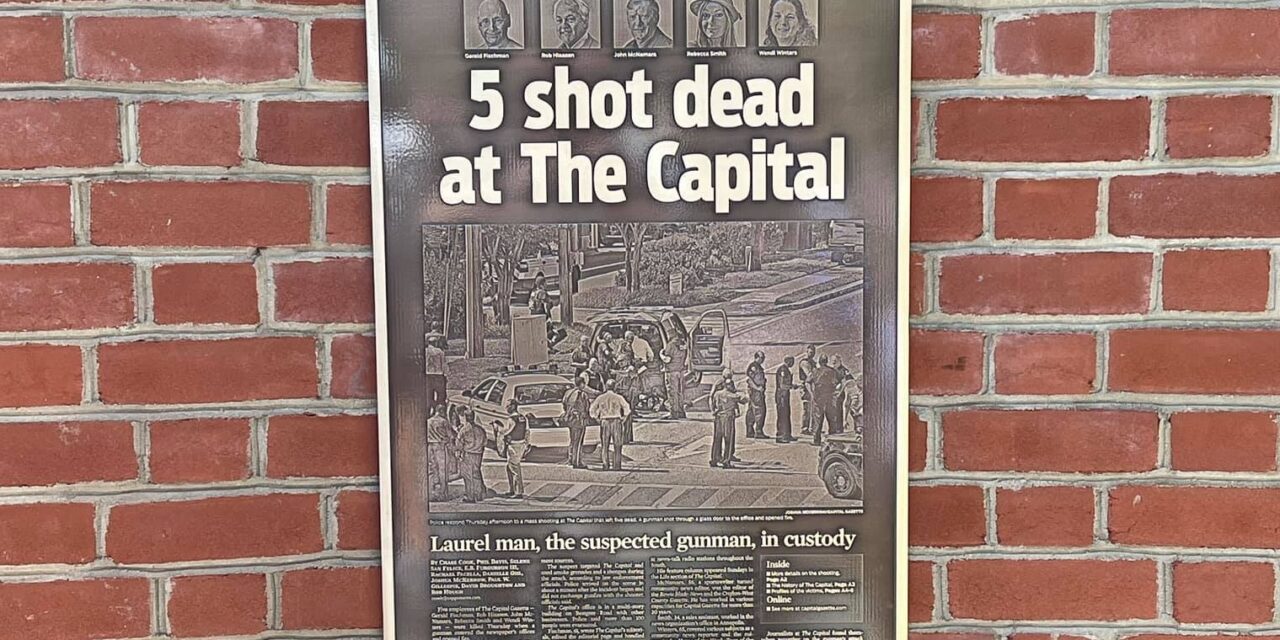 A plaque on the wall of the new Annapolis memorial to five slain journalists reproduces the front page of the newspaper the next day. MarylandReporter.com photo

CAPITAL GAZETTE KILLER GETS SIX LIFE TERMS: Anne Arundel Circuit Judge Michael Wachs brought to a conclusion three-year legal saga of the man who killed five staff members at the Capital Gazette, sentencing him to six terms of life in prison, five without the possibility of parole, plus 345 more years behind bars — all to be served consecutively. Alex Mann and Lilly Price of the Capital Gazette report on the testimony of the survivors, leading up to the sentencing.

16,500 STUDENTS QUARANTINED STATEWIDE: More than 4,000 Maryland public school students have tested positive for COVID in the first several weeks of school and another 16,500 have been quarantined because they came in close contact with someone who had COVID-19, according to data released by the Maryland State Department of Education Tuesday, Liz Bowie of the Sun reports.

VAN HOLLEN ‘HOPES’ GOP WILL END OPPOSITION TO RAISING DEBT CEILING: U.S. Sen. Chris Van Hollen, D-Md., said Tuesday that he hopes Republicans will eventually ease their opposition to raising the debt ceiling as catastrophic economic consequences could ensue from default, reports Bryan Renbaum for Maryland Reporter. His remarks come as lawmakers are also trying to come up with an agreement to fund the government.

B’MORE WRESTLES WITH TRANSIT IN BLACK NEIGHBORHOODS: In Baltimore, where about one in three people lacks access to a car, a new report by the Johns Hopkins Bloomberg School of Public Health and the Baltimore Transit Equity Coalition concluded that public transit “often fails to get people to their destinations in a reasonable amount of time.” Officials hope to use the information to direct incoming federal money to the neighborhoods most desperate for it, Colin Campbell reports in the Sun.

OPINION: COMPETENCY TO STAND TRIAL: In a column for Maryland Reporter, Psychologist Jeffrey A. Schaler, Ph.D and Professor Richard E. Vatz argue that mental health defenses used to avoid standing trial are often the most mystifying and least straightforward answers. So how does these apply to the 28-year-old Baltimore woman who killed her two children?

HARFORD PANEL RECOMMENDS NEW MAPS TO COUNCIL: The question of whether Aberdeen and Havre de Grace should be in the same council district will now go to the Harford County Council after a redistricting commission voted to recommend a modified version of the map the cities proposed, ending weeks of debate, James Whitlow reports for the Aegis. Passing 3-2 at a Monday meeting, a plan combining Havre de Grace and Aberdeen will be recommended to the county council, which will ultimately decide how the districts are drawn.