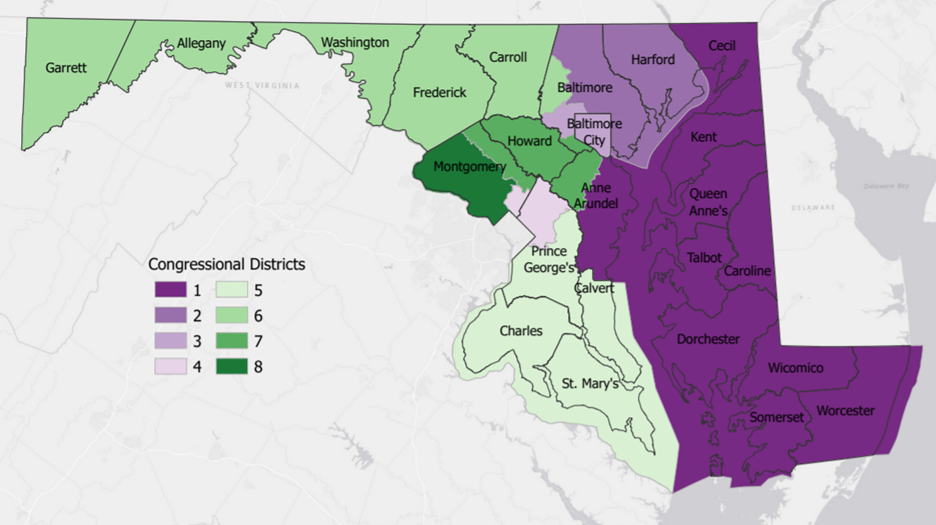 ANNAPOLIS, Md. — Interested citizens can draw their own congressional and legislative maps to submit for consideration to Maryland’s two redistricting commissions.

The commissions (https://cnsmaryland.org/2021/09/17/maryland-redistricting-groups-drawing-new-congressional-maps/), one established by Gov. Larry Hogan and one run by the Legislature, are holding public meetings to develop maps based on the new 2020 census data.

Earlier this month the Maryland Citizens Redistricting Commission — organized by Hogan — announced it was accepting submissions of maps from the public.

As of Tuesday afternoon, the public had submitted nearly 50 legislative and congressional maps to the citizen commission. 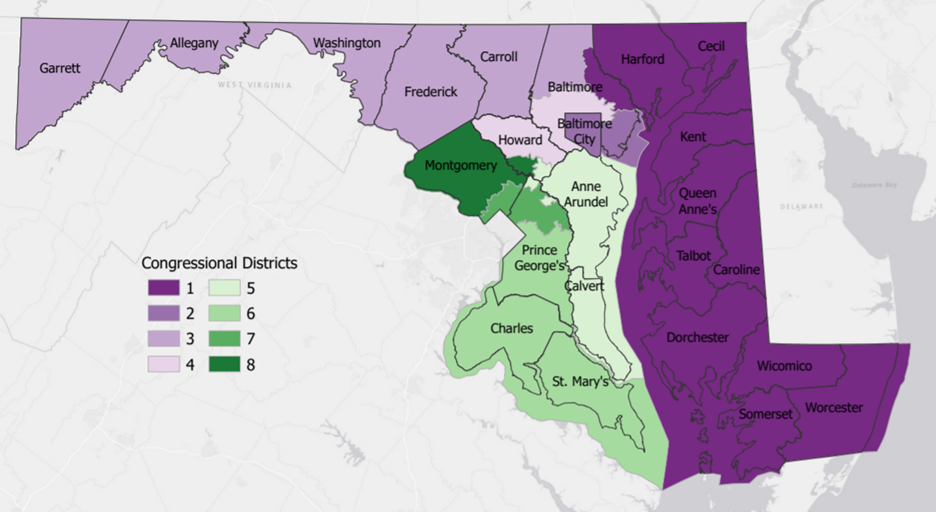 Those interested in sharing their redistricting opinions have access to an online mapping tool that includes information on the required population for congressional and legislative districts.

Chelsea Sniegowski is a secretary living in Frederick and drew her own congressional map to submit to the citizen commission.

She told Capital News Service that meeting the population numbers was the most challenging part.

“You know that you have a certain number that you’re supposed to reach, and on the outskirts of the state it’s straight forward,” Sniegowski said.

In denser central portions of the state, Sniegowski had more trouble.

She commends the commission for taking on a difficult task, but now that she’s drawn a map herself, she knows the current gerrymandered map isn’t the only possible one.

“You don’t need these funny lines,” Sniegowski said. “You can create districts that include entire counties 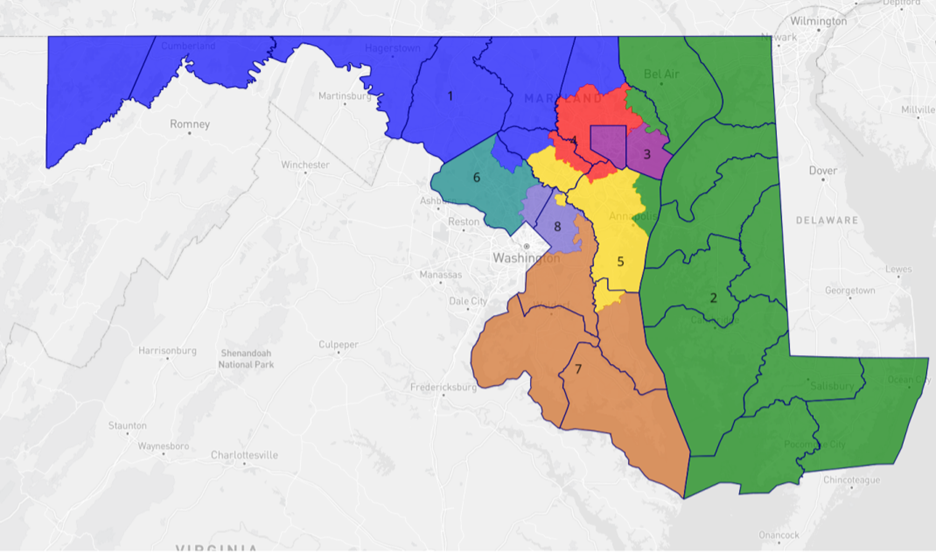 Bradley Heard submitted this congressional map, along with two legislative maps, as part of his work as an attorney and activist. Bradley Heard/Prepared for Maryland Citizens Redistricting Commission

Sniegowski has knocked doors in an election before, but she isn’t a full-time activist.

Bradley Heard, on the other hand, considers being involved part of his job as an attorney and activist.

He’s written about county council redistricting in Prince George’s and submitted maps for congressional and legislative districts to the citizen commission.

He was challenged by Maryland’s geography, including the Chesapeake Bay.

To meet population requirements, he included part of Anne Arundel County in his Eastern Shore district.

Heard made sure to include the Bay Bridge in the district as well.

“It is likely…that you do have some communities that have something to do with each other, even though they’re on different sides of the bridge,” Heard said. 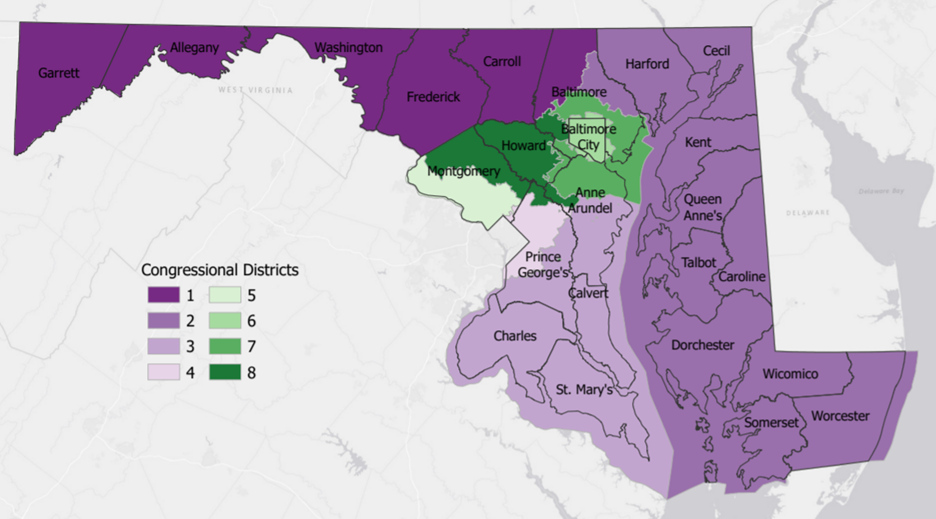 Michael Henderson doesn’t think race should be considered in electoral maps and instead prioritized communities of interest to draw these congressional lines. Michael Henderson/Prepared for Maryland Citizens Redistricting Commission

Keeping communities with similar interests together was one of Heard’s priorities in drawing his map.

Another of his priorities was to not make things worse for minority voters in the state.

For example, he didn’t want to draw districts in Baltimore City that would pack in too many people of color.

Federal law bars states from diluting minority voting power, either by packing voters into a small number of districts or by breaking up a racial group among several different districts.

Districts drawn “predominantly on the basis of race,” could be evidence of discrimination, according to the federal Department of Justice.

Michael Henderson is retired and lives in Garrett County.

He thinks race shouldn’t be considered when drawing election maps.

“Neighbors have more in common with each other,” Henderson said.

Henderson drew a map to submit to the citizen commission that he thinks keeps geographic areas with similar cultures together.

On the Eastern Shore, Henderson included part of northern Baltimore County in the congressional district. Others have suggested combining parts of Southern Maryland with the Eastern Shore to meet population requirements, but Henderson thinks it’s not a good fit.

That map gives Democrats a 7-1 advantage in Maryland’s congressional delegation.

Joe Cluster, a former delegate and former executive director of the Maryland Republican Party, wants his party to have “a fair fighting chance” in elections, despite a 2-to-1 voter registration gap.

Cluster is waiting to see what kind of maps will come from the legislative commission, which has a Democratic majority.

He said he would almost consider a 6-2 map favoring Democrats a win, but he doesn’t know if it will happen.

“I think from a national standpoint there’s always pressure on blue states as there is on red states,” Cluster said, noting that redrawn maps can give one party a political edge in Congress.

The Maryland Citizens Redistricting Commission is accepting map submissions during its second round of meetings through close of business on Friday.

The public may also submit maps during the citizen commission’s third round of meetings in October.

The citizen commission provides a free mapping tool on its website.

Members of the public can also submit maps to the legislative commission on Twitter.

The legislative commission did not immediately respond to a request to review submitted maps, but at a Monday night meeting at least one person testified to having turned in a redistricting plan.

The citizen commission is scheduled to hold a virtual working session at 6 p.m. on Wednesday.

The working session is open to the public but the commission will not hear testimony at this meeting.

The legislative commission is scheduled to meet Sept. 29 at 5 p.m. in the College Center Theatre at Allegany College of Maryland in Cumberland.

The meeting is also scheduled to be streamed on Youtube.