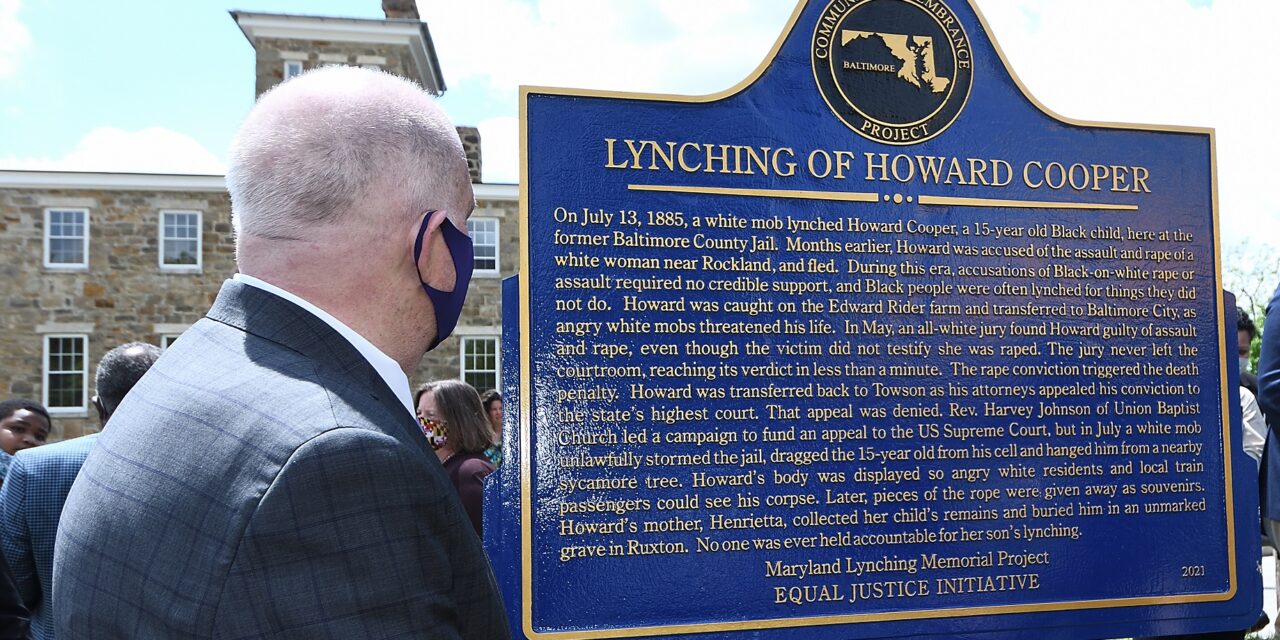 Gov. Larry Hogan used the unveiling of this plaque at the old Baltimore County Jail (in background) to issue pardons for the dozens of Black men lynched in Maryland in in the 19th and 20th centuries. Governor's Office photo by Anthony DePanise

HOGAN PARDONS 34 LYNCHING VICTIMS: Gov. Larry Hogan granted posthumous pardons Saturday to 34 Maryland lynching victims, including Howard Cooper, a 15-year-old Black boy who was hanged outside the Towson jailhouse by a white mob in 1885. Hogan’s office said it was the first time a governor has issued a “blanket pardon” for the victims of racial lynchings, Jeff Barker reports for the Sun.

FROSH TO TAP PANEL TO PROBE FORMER MEDICAL EXAMINER: Attorney General Brian E. Frosh’s office plans to appoint a panel of independent experts to audit and release a public report on all cases of deaths in police custody overseen by David Fowler, the state’s former chief medical examiner who testified in Derek Chauvin’s defense, Emily Davies of the Post reports.

PLANNERS, AMTRAK CEO COME DOWN HARD ON MAGLEV: Planners who oversee development on federal property in the Washington region are questioning the viability and benefits of a proposed high-speed train line between Washington and Baltimore, citing negative effects to land and sowing doubt about the project’s future, Luz Lazo of the Post reports.

OPINION: FIXING MARYLAND’s FLAWED TAX SYSTEM: In an op-ed for Baltimore Brew, Allison Harris of the Home Preservation Project at the Pro Bono Resource Center of Maryland, opines that like “others in Baltimore who work with people at risk of losing their homes at the city tax sale, I breathed a sigh of relief when Mayor Brandon Scott this week announced he was addressing this urgent problem. … But we advocates are not finished – not until changes are made to Maryland’s deeply flawed tax sale system that could keep city residents out of trouble in the first place.”

COURT SIDES WITH TRAVELOCITY ON STATE SALES TAX: In a defeat for the tax collector, a sharply divided Maryland high court has ruled that the hotel and rental car booking website Travelocity.com does not owe state sales and use taxes for the years before Maryland’s tax law changed in 2015 to include accommodations intermediaries, Steve Lash reports for the Daily Record.

CONGRESSIONAL DEMS PUSH SARBANES CAMPAIGN REFORM BILL: Congressional Democrats are launching a concerted push on behalf of an ambitious voting rights and campaign reform bill sponsored by Rep. John Sarbanes of Maryland that backers say is urgently needed because voter access is being threatened around the country, Jeff Barker reports the Sun.

RALLY PROMOTES VOTING RIGHT, CAMPAIGN REFORM: Lilly Price of the Capital Gazette reports that down the street from a West Street wall freshly adorned in the image of late civil rights figure John Lewis, 70 people gathered in Annapolis Saturday to honor his legacy by promoting Democratic legislation in his name that would protect voting rights heading into the 2022 midterm congressional elections. Participants also promoted U.S. Rep. John Sarbanes’ “For the People Act.”

ANNAPOLIS FIRE CHIEF TO RUN FOR DELEGATE: An Annapolis fire battalion chief and self-described moderate Republican is running for Maryland delegate in 2022, Brooks Dubose reports for the Capital Gazette. John Ortlieb, a 16-year veteran of the Annapolis Fire Department, has formed an unofficial exploratory committee to run for one of two District 30A House of Delegates seats representing Annapolis, he said.

CARROLL DEM JOINS FIELD TO UNSEAT ANDY HARRIS: Kristen Griffith of the Carroll County Times reports that a Carroll County native threw his hat into the ring for the Maryland District 1 U.S. House of Representatives seat. Dave Harden, 58, said he decided to run after he witnessed the Jan. 6 attack on the Capitol and because he can help grow the district’s economy by using the skills he has obtained through working overseas. Harden joins Democrats Heather Mizeur, Jennifer Pingley and Mia Mason, a military veteran and transgender activist, who are also hoping to unseat U.S. Rep. Andy Harris as he seeks a 7th term.

TRONE WON’T RUN FOR GOV: Cross another potential Democratic candidate for Maryland governor off the list: U.S. Rep. David Trone, who considered a run, has decided instead to seek for reelection to his seat in Congress in 2022, Pamela Wood of the Sun reports.

B’MORE TO SEND SOME 911 CALLS TO SOCIAL WORKERS: With goals of providing better help for people experiencing mental health crises in Baltimore and freeing up more time for police officers to tackle crime and build connections in the community, the city and a nonprofit organization will soon send some 911 calls to social workers and clinicians, Hallie Miller and Emily Opilo of the Sun report.

FEDS OVERHAUL FLOOD INSURANCE PRICING: The federal government is overhauling the pricing model for its flood insurance program, and Frederick County residents have about three months to appeal upcoming changes to their rates, Jillian Atelsek report for the Frederick News- Post. The National Flood Insurance Program, which provides the vast majority of flood insurance policies across the country, determines pricing by calculating a property’s elevation within a flood zone. Its model has barely changed in the more than 50 years since the program was established in 1968.

OP-ED: THE MOSBYS, A LACK OF ETHICS AND JUDGMENT: In an op-ed for MarylandReporter, Richard Vatz opines that “there are a few characteristics necessary to doing any job well, but one might say in particular, for politically administering a city, intelligence, judgment and intellectual honesty are critical. The city of Baltimore has been bereft in its leadership for years… .lacking judgment or judgment-and-honesty since Kurt Schmoke sported all three qualities in 1999.” Vatz says Baltimore is in a particularly low point, with the utterly unethical, self-serving, judgment-absent Mosbys, Marilyn and Nick.

HOPKINS RAISES MINIMUM WAGE TO $15: Lorraine Mirabella and Hallie Miller of the Sun report that Johns Hopkins, Baltimore’s largest private employer, will increase the minimum wage at its university and health system to $15 an hour. The hike affects some 6,000 Maryland workers — 1,700 in Johns Hopkins Health System and 4,834 at the Johns Hopkins University.

WALLETHUB: MARYLAND WORST FOR NURSES: National Nurses Week kicked off on Thursday, and with it comes a study that suggests of all 50 states, Maryland is the worst for nurses, writes Josh Kurtz for Maryland Matters. The study, from the financial news website WalletHub, looked at 22 metrics to determine the best states for a nursing career — particularly for young people just getting in to the profession. Maryland finished dead last; neighboring Delaware was next to last.

HOGAN CRITICIZES GOP FEALTY TO TRUMP: Gov. Larry Hogan, a Republican, defended U.S. Rep. Liz Cheney, R-Wyo., in her battles with former President Donald Trump over her House leadership role. There is no byline on this Easton Star Democrat story. Hogan also said on NBC’s “Meet the Press” on Sunday that the party needs to be move beyond its “Dear Leader” loyalty to Trump.