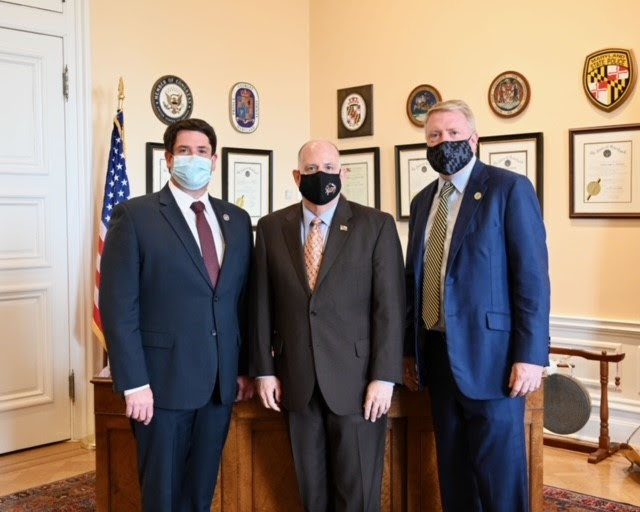 FAILED BILLS THAT MAY RETURN NEXT SESSION: The 2021 legislative session of the Maryland General Assembly will probably be most remembered for the enactment of landmark police reform legislation but there were many other proposals championed by progressive lawmakers that failed to gain traction, such as marijuana legalization and changes to the way the state taxes its most wealthy residents. And those proposals are poised to return next session, reports Bryan Renbaum of Maryland Reporter.

HOGAN SIGNS DOZENS OF NEW LAWS: Hours after Maryland lawmakers adjourned their annual session, Gov. Larry Hogan signed off on dozens of new laws Tuesday, including measures that set standards for compensating the wrongly incarcerated and restructuring the leadership of the Maryland Environmental Service, Pamela Wood of the Sun reports.

BILLS PASS TO ADDRESS HEALTH INEQUITIES: A swath of bills that aim to address health inequities in Maryland have successfully passed through the General Assembly this session, including legislation cementing pandemic telehealth expansions into law, a permanent revitalization of a major 2012 public health pilot and medical debt protections. Johanna Alonso of the Daily Record reports.

SPORTS BETTING COULD BE IN PLACE BY FALL: The House and Senate both approved a framework for the new sports betting industry that will include licenses for large casinos, professional sports stadiums and horse racing facilities. The legislation passed by wide margins as an emergency bill, which means that sports betting could be up and running by the start of the NFL season, Madeleine O’Neill of the USA Today Network reports.

OPINION: A SURPRISINGLY PRODUCTIVE YEAR: The editorial board for the Sun opines that lawmakers wrapped up their 90-day session Monday night with results that speak for themselves. From overturning Gov. Hogan’s blueprint veto and putting the state on a path to higher performing public schools, to dispensing billions of dollars in federal pandemic relief and moving forward with police reform at a particularly opportune moment in this nation’s history, the General Assembly outperformed expectations for even a non-pandemic year.

NEW LEADERS FOR GOP CAUCUS: Republicans in the Maryland House of Delegates selected new leaders Tuesday, opting for a leadership team from rural areas on opposite sides of the state. Pamela Wood of the Sun reports that in a closed-door vote following the last day of the annual General Assembly session, the 42 Republicans chose Del. Jason Buckel of Allegany County as minority leader and Del. Christopher Adams of the Eastern Shore as minority whip.

BUSINESSES BREATHE SIGH OF RELIEF: With a few notable exceptions, business owners in Maryland — especially small businesses and the hospitality industry, which was decimated nationwide by the coronavirus pandemic — are breathing a sigh of relief following the General Assembly session that concluded Monday, Johanna Alonso of the Daily Record reports.

MARYLAND PAUSES USE OF J&J VAXX: Vaccination sites in Maryland will pause the use of the Johnson & Johnson COVID-19 vaccine as federal government officials review six reported cases of an extremely rare and severe type of blood clot found in recipients of the immunization. The cases are out of more than 6.8 million Americans who received that vaccine, Hallie Miller and Meredith Cohn of the Sun report.

FREDERICK COLLEGE HOPES TO RAMP UP VAXX CLINIC: Frederick County health officials are hopeful that the number of vaccinations at a Frederick Community College clinic can be ramped up in coming weeks, even as the Food and Drug Administration recommended the precautionary pause of the Johnson & Johnson vaccine after a small number of patients who received it experienced blood clots, Ryan Marshall of the Frederick News =-Post reports.

OLSZEWSKI MULLS RUNNING FOR GOV: In a string of messages posted Sunday to Twitter, Baltimore County Executive Johnny Olszewski Jr. said he is considering running for governor of Maryland in 2022, reports Christine Condon of the Sun.

REPORT: TOP BA CO OFFICIAL MADE $30,000 IN UNAUTHORIZED SPENDING: A top official at Baltimore County’s Department of Economic and Workforce Development, William “Chris” McCollum, made $29,670 in unauthorized expenditures when he headed the county’s Ag Center, according to a report released today by Inspector General Kelly Madigan. Another $8,925 in problematic purchases were made by a lower-ranked employee who had access to county-issued procurement cards, reports Mark Reutter of Baltimore Brew.

HOWARD RESTAURANTS NAVIGATE NEW PLASTICS LAW: Restaurants in Howard County are navigating the county’s new Plastics Reduction Act, which aims to limit single-use plastic such as straws, stirrers and certain condiment packets by requiring retailers and restaurants to supply alternatives and by asking before giving out condiment packets and plastic ware to customers, Ana Faguy of the Howard County Times reports.

State Roundup: Del. McIntosh to retire after 30 years in General Assembly; what Maryland might get from Build Back Better bill