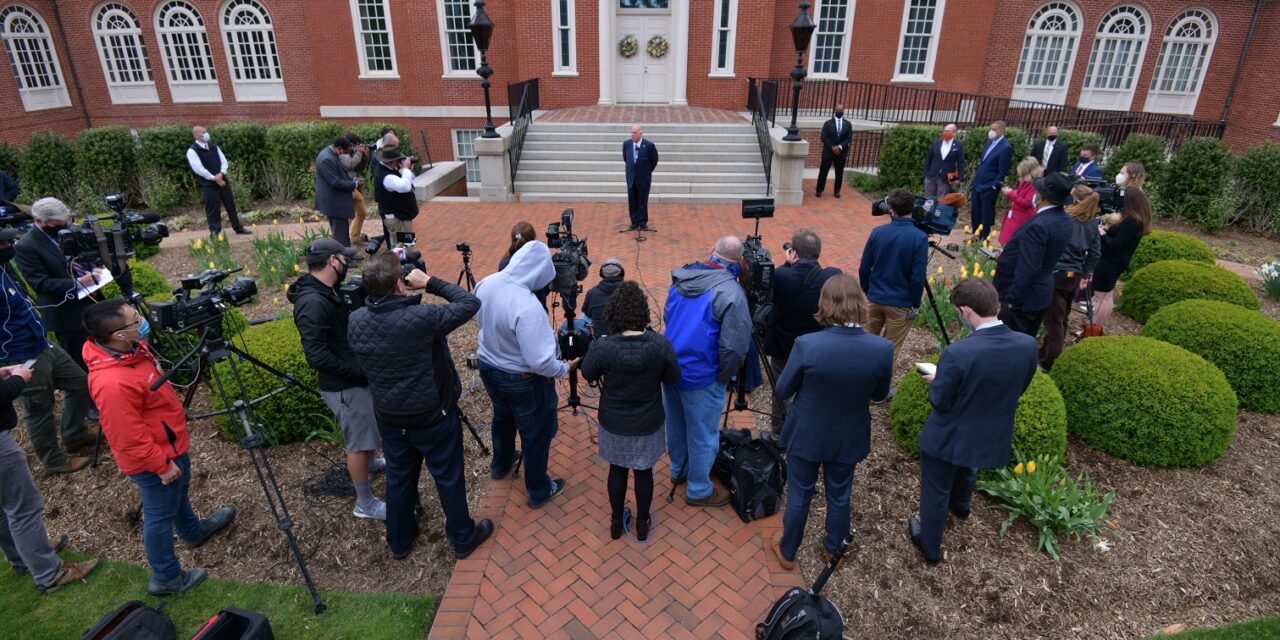 Gov. Larry Hogan spoke to reporters outside the governor's mansion Monday. "I think it was a terrific session. I want to thank legislative leaders and legislators on both sides of the aisle for their hard work over the past 90 days. I would say this was by far our best legislative session ever in seven years," Hogan said. Governor's Office photo

END OF SESSION FOCUS: PANDEMIC RECOVER, REFORMS: Senate President Bill Ferguson kicked off the final day of the 442nd session of the Maryland General Assembly on Monday afternoon by expressing gratitude that this year, unlike last year, the coronavirus pandemic did not stop lawmakers from completing the regular 90-day legislative session, Bryan Renbaum reports for Maryland Reporter.

SPORTS BETTING SET UP: In one of their most significant final day actions, lawmakers reached agreement on a plan to establish legalized gambling on sports, passing a bill to permit nearly 100 in-person and online venues, Pamela Wood and Bryn Stole of the Sun report.

EQUITY BILL PASS: PAROLE, IMMIGRATION TOP LIST: General Assembly capped a legislative session focused on systemic inequity Monday night by passing a string of liberal priorities, stripping control of parole decisions from the governor, banning for-profit immigration detention centers and requiring the planting of 5 million trees in the state over the next 10 years, Ovetta Wiggins and Erin Cox of the Post report.

BILLIONS TOWARD PANDEMIC: In a frantic rush Monday, Maryland’s lawmakers capped a legislative session in which they spent billions of dollars to help the state rebound from the coronavirus pandemic, enacted sweeping reforms to policing practices and expanded options for voting by mail in the state, Bryn Stole and Pamela Wood report in the Sun.

POINT BY POINT ROUNDUP OF BILLS: Bryn Stole and Pamela Wood compile a list of the significant bills from the 90 day session and where they now stand, including police reform, parole for juvenile offenders, sports betting, etc.

MARYLAND LAGS VIRGINIA, NY IN LEGALIZING POT: Maryland lawmakers once said 2021 was the year for legalizing weed, but now they say the pandemic, and other legislative priorities for the 90-day session, disrupted those plans, Christine Condon of the Sun reports.

HAGERSTOWN SPORTS FACILITY PASSES: Hagerstown is one signature away from starting a nearly $60 million process for a new multipurpose sports facility, Alexis Fitzpatrick reports in the Hagerstown Herald-Mail. On Monday, a bill that would allow the Maryland Stadium Authority to serve as project manager for a new facility cleared its last hurdle in the Maryland General Assembly. The authority can also issue up to $59.5 million in bonds to finance the acquisition, design, construction and related construction expenses.

PANDEMIC PRECAUTIONS CHALLENGE ART OF NEGOTIATIONS: Del. Karen Lewis Young (D-Frederick), who chaired the Frederick County delegation during a time when committees completed most of their work via Zoom calls, said precautions due to the pandemic made some aspects more difficult, Steve Bohnel of the Frederick News-Post reports. “Communication has been a major challenge, and the art of negotiation is somewhat compromised by the inability to speak in a group face-to-face … I know you can get on a screen, but it’s not quite the same,” Lewis Young said.

END OF SESSION PHOTOS: Photojournalist Amy Davis of the Sun compiles a series of photos from the last day of the session.

GOODBYE TO HOUSE ANNEX? When the Maryland House of Delegates gaveled out of the 442nd General Assembly session just after midnight on Tuesday, it may very well have been curtains for the House Chamber Annex as well. For 90 days, half of the House of Delegates called the annex — created by combining the Montgomery County and Baltimore County delegation rooms in the House Office Building — home, Danielle Gaines reports for Maryland Matters.

ELRICH STRUGLES WITH GREENHOUSE EMISSIONS GOALS: Marc Elrich is halfway through his first term as Montgomery County executive, the top elected post in this liberal suburb of 1 million. He’s charged with figuring out how to fulfill the all-Democratic council’s pledge to reduce greenhouse gas emissions by 80% over 10 years. And, like municipal leaders across the country, he’s struggling, Rebecca Tan of the Post reports.

CARROLL COVID CASE TOTAL DOWN: As the Carroll County Health Department adopted state eligibility protocols allowing everyone 16 or older to register for and receive the COVID-19 vaccine, the county also reported that last week’s new case total dropped from the previous week. But that could change, Bob Blubaugh reports for the Carroll County Times.

JHU MANDATES STUDENT COVID VACCINES: As universities around the country announce that students must be vaccinated against COVID-19 before they can return to campus in the fall, Johns Hopkins University has become the first school in the state to announce its decision to mandate the vaccine, joining schools like Rutgers, Brown and Cornell, Johanna Alonso reports for the Daily Record.

‘RICHIE’ EVANS, CREASE OWNER, CARTER ADVANCE MAN, DIES AT 79: Richard Edelen “Richie” Evans, a former lacrosse player whose Towson bar, The Crease, attracted a wide following, died of COVID-19 complications Friday at Kindred Hospital in St. Petersburg, Fla. The former Towson resident was 79. He had been an advance man for the vice-presidential campaign of Maine Sen. Edmund Muskie, who ran alongside Hubert Humphrey in the 1968 presidential campaign, as well as President Jimmy Carter, Jacques Kelly of the Sun reports.