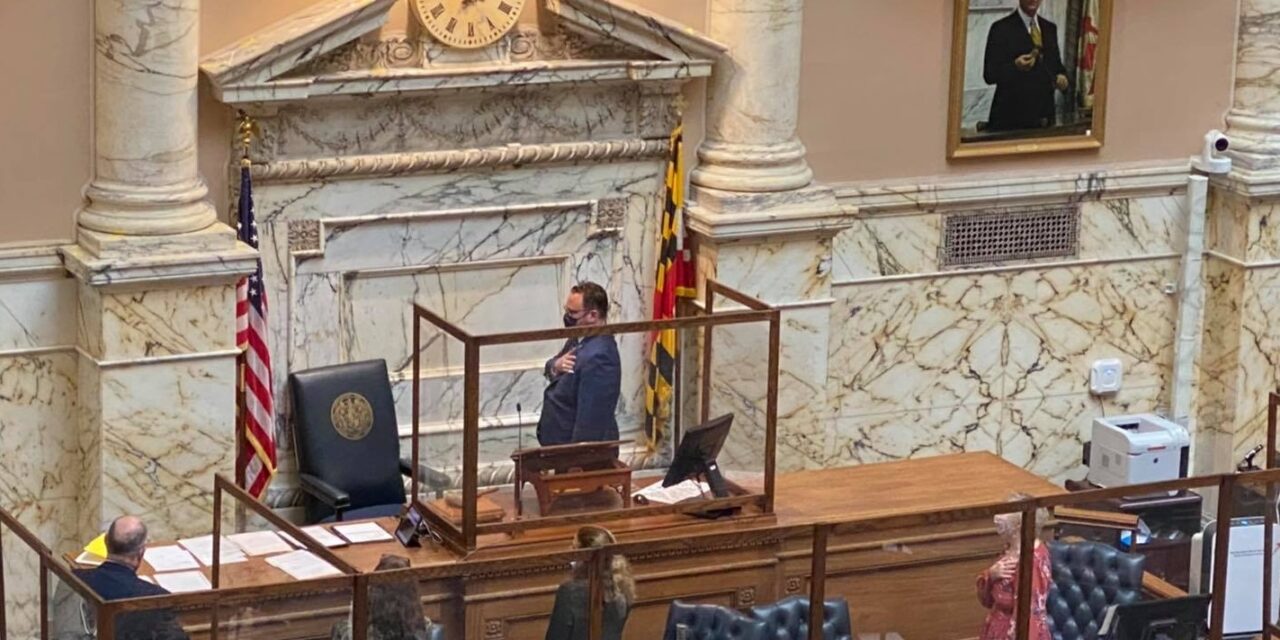 The House of Delegates begins every session with the speaker leading the chamber in the Pledge of Allegiance. On Thursday, "This morning to the momentary horror of some democratic members of the House of Delegates I stood in for the Speaker who took my seat in the Chamber. April Fools!," said House Republican Leader Nic Kipke on his Facebook page.

VACCINE PRE-REGISTRATION STARTS FOR ALL: Pre-registration is now open for Marylanders who will be eligible to receive a COVID-19 vaccine in the state’s third and final phase of its vaccine distribution plan, Bryan Renbaum writes for Maryland Reporter. “As of today every single Marylander who wants a COVID-19 vaccine can now pre-register for an appointment at a mass vaccination site,” Gov. Larry Hogan said at a news conference at the State House in Annapolis.

MARYLAND VACCINE WEBSITE RANKED LAST FOR DISABILITIES: In a Johns Hopkins University dashboard ranking which states are making COVID-19 vaccine websites accessible for people with disabilities, Maryland came in last, CBS Baltimore staff reports for WJZ. Researchers cited errors and charts and tables that can be impossible for people with vision impairments or other disabilities.

FALLOUT, REACTION FROM LOSS OF J&J DOSES IN PRODUCTION: The Maryland company at the center of quality problems that led Johnson & Johnson to discard 15 million doses of its coronavirus vaccine has a string of citations from U.S. health officials for quality control problems, Richard Lardner and Jason Dearen report for the AP.

BUDGET WILL INCLUDE PRIVATE SCHOOL VOUCHERS: Negotiators from the Maryland Senate and House of Delegates finalized details of the state’s 2022 budget on Thursday, Danielle Gaines reports for Maryland Matters. They approved a plan expected to tally more than $52 billion. Some key changes include restoring $10 million in a private school voucher program and eliminating funding for pre-release units in St. Mary’s and Queen Anne’s counties.

CLIMATE BILL AMENDED DRASTICALLY IN HOUSE: A senator expresses his disappointment as a House subcommittee has drastically amended ambitious climate legislation, Elizabeth Shew reports for Maryland Matters. By proposing a spate of amendments Wednesday, a House panel essentially ensured that two substantially different climate bills are moving through the General Assembly and the Senate’s lead sponsor commented “they almost gutted the bill.”

YUMI HOGAN TAKES POWERFUL STANCE ON ASIAN-AMERICAN HATE: First Lady Yumi Hogan is inspired by the new “strength, determination and resilience in our eyes” after a growing number of attacks against Asian-Americans, she wrote in an op-ed for CNN. Hogan, 61, is the first Korean-American first lady of a U.S. state as well as the first Asian-American first lady of Maryland, Bryan Renbaum writes about the op-ed for Maryland Reporter. She emigrated to the U.S. from South Korea more than four decades ago.

CARROLL COUNTY HAS 30% VACCINATED: About 30% of Carroll County residents have been at least partially vaccinated against COVID-19, Bob Blubaugh reports for the Carroll County Times. That is more people than could fit into Oriole Park at Camden Yards.

CORONAVIRUS ON THE RISE? Montgomery County Executive Marc Elrich criticized the state reopening, saying Wednesday that the recent rise in COVID-19 cases across the state was “predictable” but “avoidable,” the staff of the Bethesda Beat report. His remarks come after Gov. Larry Hogan lifted capacity limits at many indoor and outdoor facilities, including restaurants and retail stores.

PATHOLOGICAL GAMBLING PROGRAM SEES RISE IN VIOLATIONS: Maryland casinos saw a pandemic rise in violations by self-banned gamblers, with 205 violations in the second half of the year, a 61% increase over the 127 in the second half of 2019, Jeff Barker reports for the Sun. The Voluntary Exclusion Program was created to help people who consider themselves problem or pathological gamblers.

SEEKING DISBARMENT FOR LONG-TIME HARFORD SA: The Maryland Attorney Grievance Commission will continue to press for retired Harford County State’s Attorney Joseph I. Cassilly’s disbarment for withholding a report from the defense in a decades-old murder case and for misleading a court about the study’s existence, Steve Lash reports for The Daily Record.The push comes after a judge recommended he be merely reprimanded, and Cassily disputed the findings through court filings.

COMMENTARY: GUBERNATORIAL CHOICES: Josh Kurtz outlines possible gubernatorial candidates and wonders, “How is it possible that a woman of substance and character isn’t gearing up to seek the Democratic nomination for governor?”

RUPPERSBURGER ON POSTAL PROBLEMS: Postal complaints at a post office in Dundalk has drawn the ire of U.S. Rep Dutch Ruppersburger, who has received over 200 complaints since January, Barry Simms reports for WBALTV.