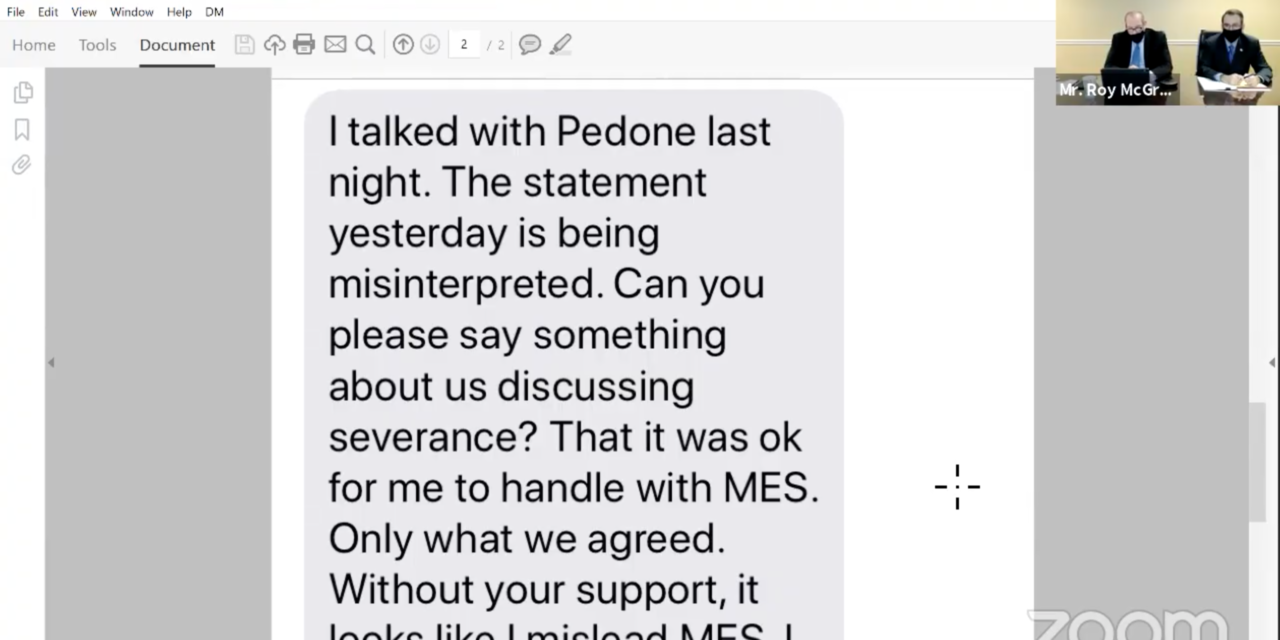 Gov. Larry Hogan’s former Chief of Staff Roy McGrath declined to answer several questions during an oversight hearing Wednesday regarding the six-figure severance payout he received,  and what role, if any, Hogan played in that decision to dole out the cash.

McGrath served as the governor’s chief of staff from June 1, 2020 to Aug. 17, 2020. He resigned shortly after news of the severance was made public. McGrath served as director of the Maryland Environmental Service (MES) from Dec. 21, 2016 to May 30, 2020. The MES board of directors approved the controversial $239,000 payout in a May 28 privately-held virtual meeting.

“At the present time it has become apparent to me that there are accusations that have been raised against me resulting in agencies becoming involved in examining matters related to my time at the Maryland Environmental Service. While I remain incredibly proud of the work of the MES team and the progress that has been made over the last few years, based on our inability to gain clarity on the status of those matters and on the advice of my counsel at this time, I am going to invoke those rights guaranteed me through the laws of the state of Maryland and the state and federal constitutions. And I therefore respectfully decline to respond to that question,” McGrath said at a virtual Joint Committee on Fair Practices and State Personnel Oversight hearing.

McGrath added: “Certainly I’d prefer to be in a position to speak more freely today. At such time as circumstances change and my counsel advises I will notify you and eagerly respond to questions put to me by this committee.”

The question was posed by the committee’s attorney, Ward B. Coe III.  Coe followed up with about a dozen additional questions related to who had knowledge of the payout.

McGrath declined to answer almost all of the questions.

McGrath declined to confirm the authenticity of any of the records.

Barron presented the hearing as an opportunity for McGrath to tell his side of the story. Lam noted that McGrath’s appearance was less than voluntary.

“This is actually an opportunity for Mr. McGrath to either come clean or to explain what permission he says he had from the governor for his payout-to explain his expenses and explain his management of the Maryland Environmental Service,” Barron said.

“While Mr. McGrath has taken every opportunity to convey his side of the story to the public through Op-Eds and other statements, he has declined to appear before this committee until now. And we had to compel him to do so,” Lam said.

Earlier Thursday Hogan issued an executive order that establishes a state commission aimed at increasing oversight over the operations of quasi-governmental agencies such as MES.

“Since taking office, our administration has pushed to restore integrity and accountability to our state government and to ensure that the best interests of Maryland’s citizens are being represented fairly and honestly,” Hogan said in a statement. “We need to take a long and hard look at the way that our quasi-governmental agencies operate and focus on making real and systemic reforms.”

Paid sick leave bill sent to Hogan, who has pledged a veto