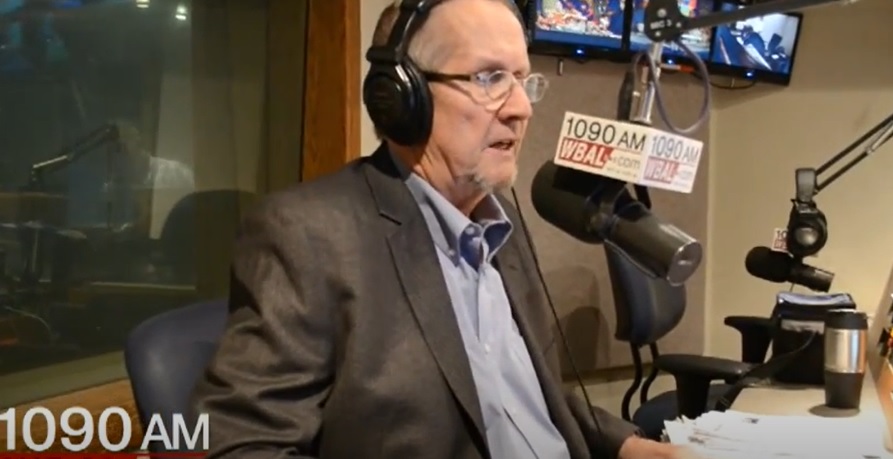 Talk show host Ron Smith told his listeners he had stage 4 pancreatic cancer that had metastasized to other organs Oct. 17, 2001. He died the next month. Here is a link to the full video from which this screen shot is taken. https://www.youtube.com/watch?v=QTa5RVYh_lg

I was reminded some days ago by the inestimable June Smith that on December 19 it will have been 9 years since her Ron left us, and to put it simply: he was the best radio talk show host ever — anywhere.

To be a great talk show host, one must be knowledgeable, articulate, honest and have good judgment. Ron’s encyclopedic understanding of an incredible range of topics and his ability to declaim articulately on them and confront honestly the best opposite opinions consistently made him simply non pareil.

There is no talk show host at his WBAL Radio home stomping ground who can come close to matching him, although they are all serviceable hosts. In addition, in Ron’s years the entire WBAL Radio sociology was exceptional.  Ron was bolstered by the exquisitely knowledgeable news director, Mark Miller, a regular guest, and backed by the superb vice president and station manager, Jeff Beauchamp.

WCBM has some truly brilliant hosts, but even they and the former talk show host Jimmy Mathis are not quite at Ron’s comprehensive level.

Ron’s sheer brilliance, consistency and unparalleled reading of history and politics was something that today’s fractious and polarized audiences should hear but do not. He was a true Renaissance Man and one with a great sophisticated sense of humor. His competition historically? William F. Buckley, on whose Firing Line I appeared. I would have loved to see them go at it, but Ron would have had to find points on which they disagreed. And he would have.

In an excellent piece pursuant to Ron’s passing, the Baltimore Sun’s David Zurawik, whose politics were a far cry from Ron’s, spoke admiringly of Ron’s unique “informed conversation” as well as his stoicism facing his terminal illness.

Ron was unfailingly polite to the limited guests of whom he was critical who would dare to confront him on his show. But he never backed down from his positions.

He was often prescient on his positions, say his opposition to the Iraq War, but understood it would take time for history’s corroboration of his position. He took the heat with good grace while not yielding.

Let me just say that those who never heard Ron don’t know all that of which a top talk show host is capable — incisiveness, sophisticated wit, silliness, yes silliness — we debated Christiane Armanpour’s pulchritude and her excellence, and he was right, as it turned out, about that, too  — and always the unexpected insight.

He was and remains the best “Talk Show Man.”

(Something not well known: “Talk Show Man” was the title he loved and one which showed what a tough guy he was. Former Baltimore Sun writer Michael Olesker used the appellation to affectedly disparage Ron in columns, and, true to his unthreatened self, Ron adopted it as his own, thrilling his legions of fans.)

Here’s is the 2011 farewell to Smith by Len Lazarick of Maryland Reporter.