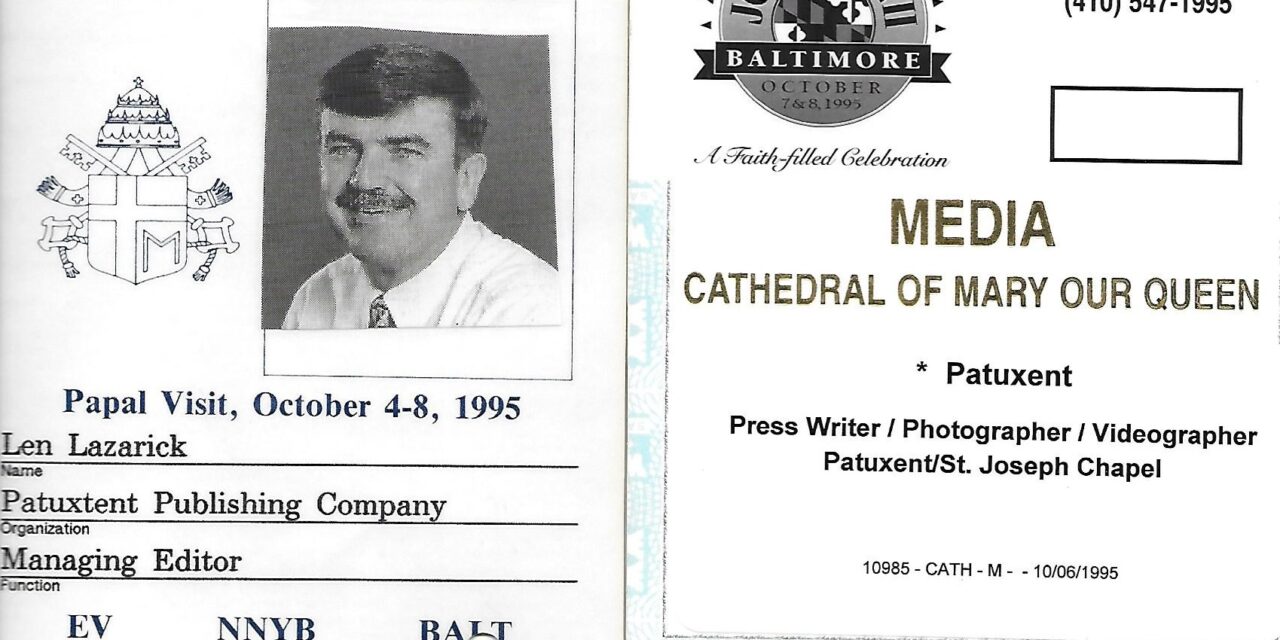 Sitting at my desk on yet another Zoom meeting Wednesday, I spied a 25-year-old press credential that had always held a special place, hanging from its red, commemorative lanyard on my bulletin board.

I’ve had many a press pass over the years, mostly for political events – debates, conventions, inaugurals and such.

But this media credential was for the visit of Pope John Paul II to Baltimore that happened 25 years ago last week. Perhaps I missed any coverage of this anniversary.

I wrote about the pope’s visit in my Oct. 11 column in the Towson Times and the other Patuxent Publishing papers in Baltimore County, now all swallowed up by the Tribune Co. A picture of the whole column, including its library marks, appears at the bottom of this article.

That Oct. 8 Sunday was particularly special because of its connection to my work with Chinese journalists, work that led 10 years later to a master’s degree and teaching East Asian history again this year. Here are the closing paragraphs of that column.

“As he reached out to all nations and races Sunday, John Paul II surely didn’t know that three Chinese journalists were making their First Communion. A man of firm principles, he likely would be unhappy to learn that not only was it their First Communion, it was also the first Mass for these non-Christians.

“He may have been more approving to know that my Chinese companions had requested to attend the Mass despite the orders of higher-ups. We scrambled to get them tickets, striking a blow for both freedom of the press and freedom of religion. We managed by an act of grace to get them fabulous front row seats of the bleachers.

When the pope passed just a dozen feet from us in the popemobile as he left the stadium, he made it a very special day for a bunch of journalists, which is about as close to a miracle as you can come.”

“Not convenient” became “we want to go”

The journalists were perhaps the third or fourth group from China we at Patuxent  had brought to the states through a federal grant. As we planned their stay, we kept asking about the papal visit. “That is not convenient” came the answers from Beijing. In China, that is among the euphemisms for events that might be politically sensitive, like participating in a ceremony with the world’s most famous anti-communist.

But almost the first words out of their lips as they got off their plane at BWI – back in those distant days when you could meet people as they disembarked – were “We want to see the pope.”

And so we did. Patuxent editors were in tight with the local planners for the papal visit. We got them tickets for what I thought were the far-off bleachers at Camden Yards. What I didn’t know was that the altar at Oriole’s Park was set up in far left-field, right near our seats. Among the 50,000 or so people packing the stadium and fields, we had some of the best seats in the house.

I also did not know that hundreds of priests would spread out quickly to deliver communion to most every row. The Chinese were sitting to my left as they rose with the rest of the congregants, and I would have had to tackle them to prevent them taking the sacred wafer. I don’t think Jesus and the disciples asked who were the true believers when they handed out the loaves and fishes – how’s that for putting the best interpretation of this flagrant violation of church law?

After the Mass, I asked one of the leaders what he thought of the long ceremony, which included dancers and a hymn sung to the melody of Beethoven’s Ode to Joy. He said it reminded him of demonstrations in Tiananmen Square in Beijing with Chairman Mao, including the Ode to Joy.

The journalists were mighty unhappy I wrote about their attendance, fearing there would be repercussions when they got home. I never heard if there were.

I don’t know if any of those journalists remember that special day. But I do, and I thought I should share it with you.