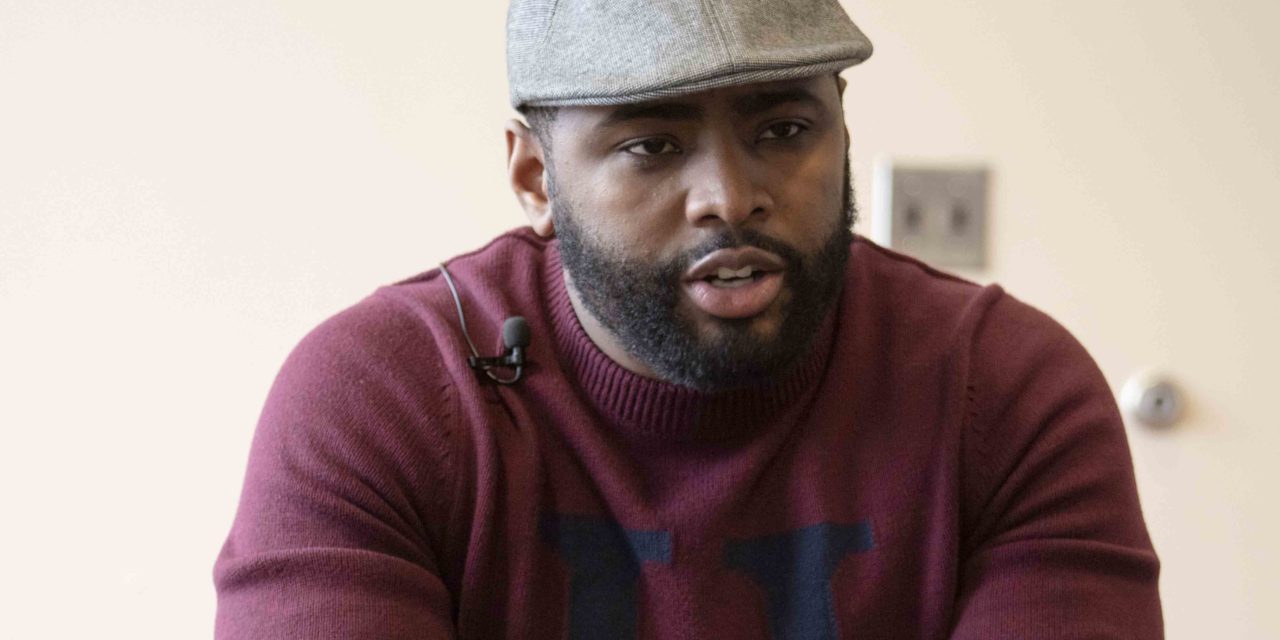 BALTIMORE — Wesley Hawkins pulled into a parking space outside an East Baltimore high school, already running late for his weekly check-in with teenagers he mentors. His visit to a hospitalized student, another of the youths he counsels, had delayed him.

Stacked on the passenger seat next to him were campaign signs: “Wesley Hawkins for Baltimore,” they read, and “Together We Rise.” Later that day, he’d be going door-to-door seeking support for a City Council run. (He would end up losing in the June 2 primary).

Then he’d have to prepare to attend neighborhood events related to the Elijah Cummings Healing City Act, for which he serves as a community liaison. He’d have to think about the courses he’s taking for a master’s degree, as well as plan for promoting his recently published book. And he still had to make dinner for his little brother.

At the heart of his schedule is the work he’s done for nearly eight years: The Nolita Project, the organization he created to help Baltimore teenagers who may feel they need someone to rely on.

The Nolita Project, which formally became a nonprofit in 2017, is named in honor of his mother, Nolita Smith, who died in 2015 because, he said, of addiction. He founded Nolita because he knows what it’s like for a child to need support.

“I’ve lived it,” Hawkins said. “I’m from it. And I feel like if we don’t get out here and take the chance to invest in these children, then what?”

On this Monday afternoon in March at The Reach! Partnership School — just before the coronavirus pandemic shut schools down —  he spent about 45 minutes with three students.  He started the conversation with some joking, then asked about their weekend, their classes, their school assignments and how things were going at home.

Hawkins says he talks to the students “on a real level.”

‘How you move forward’

As teenagers growing up in Baltimore, several of Hawkins’ students have endured trauma, including rising senior Larry Thompson, whose older brother is incarcerated.

“For certain things, it’s really hard to talk about, like my brother being locked up,” Thompson said to Hawkins during the check-in at the high school.

Thompson said that after knowing Hawkins for nearly two years, Hawkins has become a big brother.

“I felt more comfortable (opening up to him) and I felt like he’s somebody I could trust,” Thompson said. “I felt like I could really depend on this guy.”

Each student has responded to trauma differently. Some have become desensitized to the gun violence in Baltimore and battle anger and behavioral issues. Others have developed depression or anxiety from losing loved ones to violence, Hawkins said.

He holds an open forum during his check-ins with students, allowing them to say whatever’s on their mind.

“We all talk about things we experience … how you get through them, how you build from it, how you move forward,” he said.

Hawkins said he wouldn’t be in the position to help mentor young people but for an aunt, his grandmother and others who invested in him and offered him hope.

Growing up, Hawkins said, his mother’s addiction to crack cocaine caused the family to move around Baltimore often.

His mother was 16 when Hawkins was born, and she had 11 more children, he said. The youngest is 7-year-old Elijah. Hawkins became his guardian after their mother died, when Elijah was 2.

Hawkins’ book “Dear Nolita: The Evolution of an Addict’s Son,” describes the cycle of problems in his home. He describes his family as being enslaved by trauma.

His grandmother, he wrote in his book, had been sexually abused as a child. Her daughter, Nolita, was, too, he said.

Nolita turned to crack cocaine at 15 years old, said Hawkins, who was born the year after. He said she couldn’t resist drugs.

Hawkins was sent into foster care at about 13, and the first year, he was moved from house to house. He said he ran away from all of them.

He wanted only to be with his mother, no matter the living conditions.

“When that’s all you know, that’s what you want to be in,” Hawkins said.

But he made it through high school and after graduation worked for about five years as a correctional officer for the Maryland state prison system.

He got an associate’s degree from Baltimore City Community College, but he said it took him more than five years to complete the program because he was so behind academically. His instructors, he said, worked closely with him to push through.

Hawkins received his bachelor’s degree in criminal justice from the University of Baltimore, where he graduated with honors.

He is now in a master’s program at Trinity Washington University, studying education with a focus on trauma and Adverse Childhood Experiences, a program that studies the effects of trauma on children.

Walter Sanders, who grew up in East Baltimore with Hawkins, said his former high school football teammate inspired him to go to college, too.

Hawkins was always positive and a hard worker, Sanders said.

“He was always one of the leaders and one of the outspoken members on the team,” Sanders said. “He was an advocate for a lot of the players and the school in general.”

He said he met Hawkins on the bus back in ninth grade. They later found out they are cousins.

“There was such a genuine charisma about him that drew a lot of folks to him, and he’s also a man of his word,” Turner said. “Outside of the charisma is his dedication in that no matter what’s going on, every single day, he gets up to make an impact.”

Turner said Hawkins has consistently pushed himself to grow.

Going to where the students are

When Hawkins began promoting The Nolita Project and enlisting young people to join, he didn’t wait for students to find him. He went to them.

Back when Hawkins started his mentoring, he often went to the corner of Belair Road and Erdman Avenue about 6:45 a.m. to talk to groups of students at bus stops before they went to school, encouraging them to avoid the destructive path that could have easily landed him behind bars or in the grave.

Jeremy Babb, who met Hawkins about 10 years ago, said he and Hawkins would sometimes drive around the city looking for students who were skipping school.

“We pulled up, saw about six or seven young people just coolin.’ We were trying to give them reasons as to why not to skip,” Babb said.

Hawkins would approach the group and say he was working on a project to uplift and inspire youth in the city.

He and Hawkins encouraged the kids to prioritize getting an education over being in the streets.

“The Nolita Project is a working project … a lifelong project that will continue to help youth,” Babb said.

The organization, based on Remmell Avenue, has mentored dozens of children in Baltimore, most of them at their schools or while on group activities, Hawkins said. Ten to 15 volunteers help with counseling.

In addition to his volunteer work at The Reach! Partnership School this school year, Hawkins said he also established a paid partnership with Fort Worthington Elementary/Middle School to mentor students there, before COVID-19 led schools to close.

Despite the shutdown, Hawkins has continued The Nolita Project’s work. He said 10 teenagers are active Nolita participants now.

Hawkins and his volunteer staff have supplied Nolita students with gloves and masks and have been advising them on applying for city jobs related to the pandemic. Hawkins has also recruited them for community service projects.

He and a Nolita student, wearing masks, have been participating in the #NoOneHungry2020 Food Giveaway at Rising Sun Baptist Church in Baltimore.

The Nolita Project was one of the sponsors of the drive, which helped feed more than 800 people in need, according to one of the event organizers, N. Jahiem McNill, youth pastor at Greater Saint John Full Gospel Church.

McNill discovered Hawkins on social media three years ago. Since then, McNill said he’s worked with Hawkins at several community and church events before the recent food drive.

“Everything is good with Brother Wesley,” McNill said. “We appreciate his services and work within the church and in the community.”

Earlier this month, when protests erupted after George Floyd died in Minneapolis in police custody, Hawkins led a demonstration downtown as well as one that included thousands on the campus of Morgan State University.

After Hawkins completes his graduate program, he said he wants to learn Spanish so he can work with the Latino community.

He wants to continue mentoring children who “just want to be seen,” he said.