AUDIT: COMMERCE DEPT. FAILED TO VERIFY JOB GROWTH: The Maryland Department of Commerce oversees a range of taxpayer-funded incentives meant to help spur job creation in the private sector. But the agency has failed to verify that companies actually created those jobs, according to a new audit, Allison Knezevich reports in the Sun. In many cases, the department relied on information provided by the companies or on infrequent reviews by its internal audits office — steps that were “insufficient to ensure compliance” with program regulations, state auditors found.

OPIOID DEATHS DROP: Maryland’s opioid-related deaths dropped during the first half of the year, including those linked to fentanyl, according to new state figures that show a bit of relief from the overdose crisis that is still claiming close to 200 lives a month in the state, Meredith Cohn reports for the Sun.

OPINION: SAVE THE OYSTERS: Speaking up for Maryland’s oysters, the editorial board for the Sun opines that the Maryland Department of Natural Resources appears determined to ignore their plight — to the point where the very existence of one of Maryland’s most revered seafood delicacies is being put at risk. On Monday, the DNR released its rules for the upcoming oyster fishing season. They are a total cave to watermen and seafood processors who once again seem determined to extract the last oyster from the Chesapeake Bay.

10 ON LIST FOR APPEALS COURT POST: Ten people are under consideration for an opening on Maryland’s highest court. Court of Appeals Judge Clayton Greene retired from his post earlier this year, creating a vacancy on the court for a judge who lives in Anne Arundel, Calvert, Charles or St. Mary’s counties, Pamela Wood reports for the Sun.

HOWARD RESIDENTS PROTEST DESEG PLAN: Jess Nocera writes in the Sun that a sea of green-clad Howard County residents chanting “Kids before politics” and “No one has to suffer” could be seen and heard on the edge of the school system’s central office building Tuesday evening ahead of a public hearing concerning the ongoing redistricting process.

B’MORE TOP COP: NO INTERNAL PROBE: Baltimore Police Commissioner Michael Harrison said Tuesday his department has not yet undertaken a “deep dive” into the origins of a corrupt police unit that planted evidence, committed robberies, dealt drugs and laundered money, Danielle Gaines of Maryland Matters reports. Harrison was asked at an Annapolis meeting of the Commission to Restore Trust in Policing whether the department had started a review to uncover any “red flags” in the hiring and training of the nine Gun Trace Task Force members and other officers who were convicted and are serving federal prison sentences.

MAYOR OPENS INVITE TO PLAINTIFFS: Baltimore Mayor Jack Young said Tuesday that he would invite plaintiffs who have filed police misconduct lawsuits against the city to speak before Baltimore’s spending panel when their cases are settled. Young and City Solicitor Andre Davis said the move is an attempt to make sure victims of police misconduct don’t feel silenced by non-disparagement clauses that remain a part of city settlements, which are approved by the Board of Estimates, Luke Broadwater reports in the Sun.

MO CO SEEKS RACIAL EQUITY: Montgomery County introduced an ambitious racial equity bill Tuesday, its most significant step in joining dozens of other jurisdictions that are seeking to correct racial inequities through government policy, Rebecca Tan of the Post is reporting.

DR. WEN, PLANNED PARENTHOOD RESOLVE DISPUTE: Dr. Leana Wen, Baltimore’s former health commissioner, has resolved a dispute with Planned Parenthood over her severance and benefits, which she said the organization was withholding to get her to sign a burdensome confidentiality contract after she was fired less than a year into her tenure as president and CEO. Both Wen and Planned Parenthood issued statements Tuesday welcoming the separation agreement — but neither addressed the confidentiality contract issue, Colin Campbell of the Sun reports. 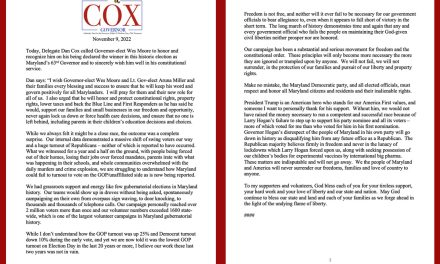