HOGAN MEETS WITH FBI ON WHITE NATIONALISM THREAT: Gov. Larry Hogan held a private meeting with officials from the FBI and the Maryland State Police on Monday to discuss crime in Baltimore and threats posed by white supremacists, Pamela Wood of the Sun reports. Hogan, a Republican, said in a statement that the group discussed “the steps being taken to the threat posed by the evil of white supremacists and racially motivated violent extremists” in light of the mass shootings over the weekend in El Paso, Texas, and Dayton, Ohio.

HERSHEY GOES AFTER WHITE NATIONALIST TERRORISM: None of the expressions of outrage were more noteworthy than those that have come over the past two days from the Twitter account of state Sen. Steve Hershey, writes Josh Kurtz in Maryland Matters. The lawmaker represents a rural district on the Eastern Shore. And he also happens to be Senate minority whip – the No. 2 Republican in the chamber. Hershey’s statements since the shootings have been as pointed as any elected Republican’s – and they seem surprising, because he has been a strong defender of the Second Amendment and hunters’ rights during his nine years in the General Assembly. He also appears to be cautioning fellow Republicans about their reluctance to criticize white supremacists.

RASKIN SAYS FEDS HAVEN’T RECOGNIZED RACIST-FUELED TERRORISM: Bruce DePuyt of Maryland Matters reports that the U.S. Rep. Jamie Raskin of Maryland said on Monday that the U.S. cannot effectively combat domestic, racism-fueled terrorism because federal law enforcement has yet to recognize that it poses a threat. The chairman of the House Oversight Subcommittee on Civil Rights and Civil Liberties, Raskin convened hearings in late spring and early summer to focus attention on the Trump administration’s failure to first acknowledge the pattern of attacks by armed white nationalists — and then to take steps to prevent future killings.

HAGERSTOWN HERALD-MAIL PART OF HUGE MEDIA MERGER: The Hagerstown Herald-Mail reports that New Media Investment Group Inc., the public parent company of its owner, GateHouse Media, has signed an agreement to acquire Gannett Co. Inc. Following closing, both the public and operating companies will be called Gannett. This ground-breaking acquisition will create the largest local news publishing organization in the country. This transaction is subject to regulatory review, which is anticipated to take several months.

CONSERVATIVE ACTIVIST SPURS CLEANUP: Christine Condon of the Sun reports that dozens of volunteers gathered near a home in Baltimore’s 7th Congressional District and started bagging garbage and weeding, too. They were inspired by Scott Presler, a Republican activist from northern Virginia who started a social media campaign to help clean up the district in the wake of President Donald Trump’s tweets about it last month. Presler is a “gays for Trump” activist who has been linked to the anti-Muslim group ACT for America, which the Southern Poverty Law Center lists as a hate group. Presler worked at ACT from February 2017 to 2018, his Facebook page says.

YANG ON BALTIMORE: During the second night of Democratic presidential debates Wednesday, candidate Andrew Yang said he’s learned about urban issues through his work with a nonprofit that operates in Baltimore and other cities. Pamela Wood of the Sun writes about that work.

OPINION: NO TO SINGLE-MEMBER DISTRICTS: Policy wonk John Moser, in an opinion piece for Maryland Matters, opines that, recently, Comptroller Peter Franchot and others have argued for single-member districts for the House of Delegates in Maryland. This would be a grave mistake. Single-member districts necessarily reduce voter representation, disenfranchise more voters and narrow the span of political ideals represented in government.

2 CASINOS’ TAKE FALLS: Maryland saw a slight bump in year-over-year casino revenue last month after two months of year-over-year declines, Amanda Yeager of the Baltimore Business Journal reports. The latest report from Maryland Lottery and Gaming shows the state brought in $149.3 million in revenue last month from its six privately owned casinos, a 1.9% increase compared with July 2018. Despite the statewide improvement, Baltimore’s Horseshoe Casino continued to see year-over-year declines with $19.4 million in revenue, a 5.2% drop. Ocean Downs Casino also reported lower revenue than a year ago at $8.2 million, a 5.5% decrease.

CARDIN ON MASS SHOOTINGS, TRUMP TWEETS: In front of a room full of residents of an Annapolis retirement community, Sen. Ben Cardin first began his town hall with a heavy topic that has recently taken over the public conversation once more — mass shootings, Naomi Harris of the Annapolis Capital writes. “We need to act — we should’ve acted years ago. We cannot just continue to say the problem is too difficult to deal with,” he said.

FREDERICK TO AUDIT SHERIFF WORK WITH ICE: Frederick County is launching an audit of the sheriff’s office’s cooperation with U.S. Immigration and Customs Enforcement, the county executive announced Monday. County Executive Jan Gardner (D) and County Council members announced an independent, third-party audit to determine how much county money is used in the program. The review will likely include an examination of the cost of county staff time for training and processing those arrested as part of the program, Steve Bohnel of the Frederick News-Post reports.

CARROLL HEALTH DEPT. TO GIVE OUT FENTANYL TEST STRIPS: John Kelvey of the Carroll County Times reports that the Carroll County Health Department is poised to introduce a new harm reduction tool in the public health battle with opioid addiction: fentanyl test strips. Fentanyl is a synthetic opioid drug many times more powerful than morphine or heroin, which has increasingly been blamed for driving up the number of fatal drug overdoses in Carroll County and across Maryland.

DUNDALK PHARMACY LEARNS LESSON ON OPIOIDS: Fern Shen of Baltimore Brew interviews the new owner of the 65-year-old Drug City Pharmacy in Dundalk about how it got listed as a top seller of opioids in Maryland from 2006 to 2012. Drug City’s owner, George Fotis, who worked at the store but didn’t own it during those years, said he and the pharmacists there believed they were following the law.

MO CO MEETS SHA ON SHOULDERLESS ROAD: Montgomery County leaders are organizing a meeting with state highway officials to discuss pedestrian safety on Old Georgetown Road after a 17-year-old was killed while riding his bicycle along the highway, Caitlynn Peetz and Dan Schere of Bethesda Beat report. There is no shoulder on Old Georgetown Road where the crash occurred. Bikers are forced to ride on a narrow sidewalk close to the road. 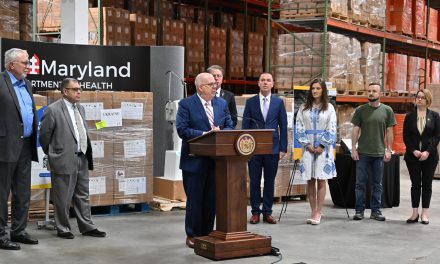