MIDDLE RIVER REPUBLICAN SHOT B’MORE VIDEO THAT SPARKED TRUMP TWEETS: Armed with a camera and a Twitter account, Kimberly Klacik  — a Middle River resident who is a member of the 6th District Republican Central Committee and cable news commentator — sparked a firestorm. The videos she posted on social media of blight and trash in West Baltimore caught the eye of Fox News and then President Donald Trump, who over the weekend launched a blistering attack against U.S. Rep. Elijah Cummings, beginning a multiday war of words between the Republican president and the leaders and boosters of deep blue Baltimore, Luke Broadwater of the Sun reports.

TRUMP EXPANDS ATTACKS: Jeff Barker of the Sun reports that on Monday, Trump expanded his weekend attacks on Baltimore to include those coming to the defense of the city and Cummings. The president claimed the Rev. Al Sharpton hates white people and police officers, and questioned why Democratic presidential candidate Bernie Sanders shouldn’t be called a racist for likening the poverty he observed in West Baltimore in 2015 to a “Third World” country.

SHARPTON, OTHERS RESPOND: Sharpton on Monday lambasted President Trump for his attacks on U.S. Rep. Cummings and the majority-black district he represents, calling Trump’s remarks “bigoted and racist.” Gov. Larry Hogan (R), in a separate radio interview, said the president’s comments describing Baltimore as a “rodent infested mess” were “outrageous and inappropriate.” But he stopped short of calling them racist, report Rachel Chason and Ovetta Wiggins in the Post.

MANY IN MD GOP KEEP LIPS ZIPPED ON TRUMP TWEETS: Some Maryland Republicans and donors to President Trump’s campaign are keeping quiet about the president’s tweetstorm assailing Baltimore and Rep. Elijah Cummings. “I have no comment on the feud between the president and Mr. Cummings,” said U.S. Rep. Andy Harris. Maryland Senate Minority Leader J.B. Jennings had not commented on Trump’s remarks about Baltimore on his social media accounts, nor did he respond to a request for comment. But then there are Wayne Gilchrist and Michael Steele, Robin Bravender writes in Maryland Matters.

OPINION: WHERE THE PROBLEMS BEGAN: In explaining how West Baltimore became so blighted, the editorial board for the Sun takes a look at the history of all types of discrimination that has been used in the city to ensure race and class inequity, from government sanctioned redlining all the way up to the type of housing discrimination that President Trump has practiced and evicting low income and frequently minority rental tenants as well as jailing tenants who fall behind in their rent, which the company that Trump’s son-in-law Jared Kushner has done.

OP-ED: McCRAY ON NEEDED STATE FUNDS: In an op-ed for the Afro, Sen. Cory McCray opines that the funds that Gov. Hogan said he wasn’t releasing total $245 million, and it is important to note that this bipartisan budget received favorable votes from both Democrats and Republicans. It was especially disheartening to hear this news because the governor’s decision to withhold these funds will directly impact the 45thLegislative District. …Not only do the governor’s actions hurt the 45th District, they hurt Baltimore City as a whole.

MOTHERS CLAIMING ABUSE LOSE CUSTODY, STUDY FINDS: Advocates and lawyers have long shared anecdotal stories of women whose claims that their spouse abused them or their children were not believed in court and whose children were punished instead. But now, a first-of-its-kind study from George Washington University has shed light on how the phenomenon has played out in courts across the country. Samantha Schmidt of the Post kicks off the article with a story about a Montgomery County woman who faced that situation and whose child ended up dead.

TOO EARLY FOR 2022: It’s way too early to say anything with certitude about the 2022 elections, opines Josh Kurtz for Maryland Matters. While it is abundantly clear that state Comptroller Peter Franchot is putting himself in the position to run and would be a strong contender if he decided to do so, he also has a toxic relationship with the Democratic establishment.

ANNAPOLIS RESIDENT TO CHALLENGE SARBANES: Annapolis resident Carole Brown announced Monday she is running for Congress in the 3rd District, a race that will put her head to head against Democratic incumbent Rep. John Sarbanes, Chase Cook of the Annaplis Capital reports. Brown has filed as a Democrat. Brown said in a statement released Monday that she has worked as a federal and state prosecutor and a private attorney.

SAVING NATIONAL PHILHARMONIC: A businessman and self-described philanthropist says he has rounded up enough money to rescue the National Philharmonic orchestra, but only if the organization appoints him president and removes its current board chair, Charlie Wright of Bethesda Beat reports. 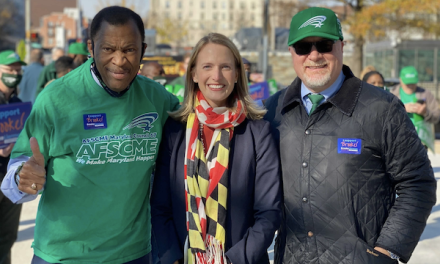