HOGAN WON’T RUN FOR PRESIDENT: Gov. Larry Hogan told the Washington Post’s Robert Costa in an interview that he won’t challenge President Donald Trump in next year’s Republican primaries. His choice dashes the political hopes of Trump’s leading GOP critics, who have wooed the popular Maryland governor for months and connected him with key players in early voting states. The decision also comes as other top Republicans are shying away from jumping into the presidential fray.

UMMS ADOPTS CONFLICT POLICY: Kevin Rector of the Sun reports that the University of Maryland Medical System has adopted a new conflict-of-interest policy that bars it from granting sole-source contracts to board members or their businesses, and precludes it from having any business with certain board leaders. The policy was mandated by a state law passed in the wake of revelations by the Sun in March that at least 10 of the hospital network’s 30 board members had contracts with the system, some of which weren’t competitively bid.

OPPOSITION GROWS TO HOGAN ROADS PLAN: As Gov. Larry Hogan’s public-private partnership to add lanes and tolls to the Capital Beltway and I-270 nears a key vote Wednesday by the Maryland Board of Public Works, some residents and elected officials in Montgomery and Prince George’s counties are questioning the wisdom of adding lanes to reduce congestion and complaining the state hasn’t listened to their feedback, Pamela Wood writes in the Sun. They suggest that the state didn’t evaluate all its options — such as making more modest road improvements or expanding transit — and instead is stuck on adding toll lanes.

HANDGUN PERMIT BOARD’s SHAKY FUTURE: Sponsors of vetoed legislation abolishing the Handgun Permit Review Board praised the qualifications of three new appointments to that panel but say it’s unlikely the board will survive, Bryan Sears of the Daily Record reports.

UM REGENTS TO PROBE ADENOVIRUS DEATH: The University System of Maryland Board of Regents met in a hastily called closed session conference call Friday afternoon, following a call a day earlier by Gov. Larry Hogan Jr. (R) for the panel to investigate the circumstances around a college freshman’s death from adenovirus last November, Danielle Gaines reports in Maryland Matters.

LEGISLATORS SPLIT ON BSO AID: Legislative leaders called on Gov. Larry Hogan Friday to release $1.6 million in funding set aside for the Baltimore Symphony Orchestra — even as they criticized orchestra management for failing to disclose earlier the depth of the organization’s financial problems, Luke Broadwater reports in the Sun.

OPINION: HELP BSO SURVIVE: The editorial board for the Sun opines that the long-simmering problems that have long beset the Baltimore Symphony Orchestra bloomed into a full debacle Thursday when the BSO management suddenly canceled a summer concert series just hours before musicians went on stage to perform a Beethoven piano concerto and other works…. Plenty of people share some blame for the way these latest developments went down, but we can’t let the anger of the moment distract us from the big picture reality that the BSO, like orchestras all across the country, faces tremendous financial pressures and must adapt if it is to survive.

TAXPAYERS FOOT STATE’s PREAKNESS TENT BILL: Pamela Wood of the Sun reports that Maryland taxpayers footed a $145,500 bill for the governor and state agencies to entertain guests in a corporate tent at the 144th Preakness Stakes last month. Politicians and others streamed in and out all day, but reporters weren’t allowed inside. The governor’s office later said it was a mistake not to allow a reporter inside.

FEDS MOVE FORWARD ON ‘GHOST SHIP’ SANCTUARY: Scott Dance of the Sun reports that, nearly five years after Maryland proposed creating a national marine sanctuary to protect a fleet of sunken “ghost ships” in Mallows Bay, the federal government is advancing the country’s first such designation in 19 years and the only one in the Chesapeake Bay region.

EXPERIENCED ADVICE FOR SPEAKER JONES: In an interview with Josh Kurtz of Maryland Matters, New Jersey Lt. Gov. Sheila Oliver (D), the second African-American woman speaker of a state House in the U.S. who lead the New Jersey state Assembly from 2010 to 2014, offers some advice to Maryland House Speaker Adrienne Jones.

OPINION: EDUCATION, TAXES & RETIREMENT: In a column for Maryland Matters, Frank DeFilippo writes, “Here we go again: The General Assembly took back $100 million that it had in hand to pay for senior state retirees’ prescription drugs. And it spent $2 billion that it doesn’t, and won’t, have on future education funding. Gov. Larry Hogan (R) was absolutely correct. What all of those dollar signs mean is that a tax increase is a certainty even though he allowed the bill to become law without his signature. No governor wants to be against education. And no governor wants to author a tax increase.”

PODCAST: ELLICOTT CITY’s FUTURE: In 2016, historic Ellicott City experienced a record, deadly flood that tore lives, businesses and the county apart. In 2018, it happened again — another devastating flood, but this time perhaps even more egregious than the first. How confident are residents and business owners in their government to keep them safe? In this Sun podcast, Howard County Times reporter Erin B. Logan joins Pamela Wood to discuss the town’s recovery.

MILL CLOSING DEVASTATES SMALL TOWN: Arelis Hernandez of the Post interviews quite a number of residents of Luke and workers of the paper mill, which closed on Friday night. The closure eliminates 675 jobs and will affect nearly 2,000 others employed by other businesses here in Luke and in the sister towns of Westernport, Md., and Piedmont, W.Va. Taxes from the mill fund most of the town budget. Filtered drinking water for Luke’s 150 residents comes from an expensive water-treatment facility that depends on mill water to keep functioning.

OPINION: IT’s THE GUNS: The editorial board of the Annapolis Capital, writing in the wake of the mass shooting in Virginia and with its own tragic murders still fresh, opines that “America cannot go on like this. This nation cannot survive under the existential threat of mass shootings at work, at schools, at music festivals or movie theaters. With every new explosion of homicidal mania, our collective soul weakens a bit and what it means to be American sours.”

NSA HACK NO FACTOR IN CITY ATTACK, DUTCH SAYS: The National Security Agency told Rep. Dutch Ruppersberger on Friday that a hacking tool the agency is believed to have created was not a factor in the Baltimore ransomware attack, the congressman said. Ian Duncan of the Sun writes that the agency’s contention that the EternalBlue tool wasn’t used in the incident contradicts a New York Times report published May 25. The Times cited security experts briefed on the case and reported that “a key component of the malware that cybercriminals used in the attack” was developed by the NSA.

MO CO GROUP FIGHTS FOR QUIET SKIES: The Montgomery Quiet Skies Coalition, a group that includes Potomac and Cabin John residents, is taking its fight against the Federal Aviation Administration to the political arena, reports Dan Schere for Bethesda Beat. The Federal Aviation Administration announced last week that it was considering new arrival landing procedures at Ronald Reagan Washington National Airport that could mean more planes and noise along the flight path to the Arlington, Virginia airport.

AMASH & HOGAN SR.: Robin Bravender of Maryland Matters recalls Maryland history when she writes that only one congressional Republican has publicly called for President Trump’s impeachment, enraging his colleagues and invoking the wrath of the president by offering the campaign to boot Trump the stamp of bipartisanship. But Rep. Justin Amash (R-Mich.) isn’t the first congressman to publicly call for the ouster of his party’s president. One of the most famous was Rep. Lawrence J. Hogan Sr. —  a Maryland Republican and the current governor’s father, who turned on President Nixon during the 1974 House impeachment proceedings. 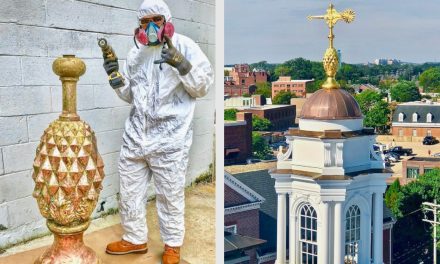