Delaying state employees’ 3% pay raise tops the list of proposed additional budget cuts legislative analysts are recommending to cope with a revenue shortfall of $200 million to $350 million they are expecting to be announced next week.

The House Appropriations Committee is supposed to finish its work on the Hogan administration’s $46.6 billion budget March 8. The day before that, the Board of Revenue Estimates is likely to write down revenues for both fiscal 2019 and 2020 by $200 million to $350 million, David Romans of the Department of Legislative Services told committee members Tuesday.

More data on tax receipts will be coming in over the next week, and “It’s possible it will be significantly less than” $350 million, Romans said.

Legislative analysts had already recommended about $200 million in budget cuts to Appropriations subcommittees, and they have come up with a list of $492 million more. The legislature can only cut the governor’s budget, but it can also propose legislation to reduce spending formulas and mandates that drive 80% of the budget.

Appropriations Chair Maggie McIntosh, D-Baltimore, told the committee, “If we don’t take all of their recommendations plus more we don’t have enough money to balance the budget.”

Besides delaying the pay raises until January ($70 million), DLS recommendations also include delaying pay hikes for health care providers ($36 million), reducing the Rainy Day Fund by $90 million, and cutting $76 million from the amount budgeted for debt service on state bonds. That last move that would force the Board of Public Works to raise the state property tax rate so that it would not default on its bonds.

Hogan had already put aside $90 million more in the rainy day fund than the legislature recommended. Rather than cut more, Romans reminded the committee that the state is already facing an almost $1 billion deficit in fiscal 2021, and even larger structural deficits in the out years.

There are a score of smaller budget cuts recommended by DLS staff in the full report Romans gave to the committee. The full 20-minute video of the DLS presentation begins at about minute 8.

Besides balancing the budget, McIntosh is also looking for ways to begin funding $300 million in increased aid to public schools in the coming year requested by the Kirwan Commission on Innovation and Excellence in Education. 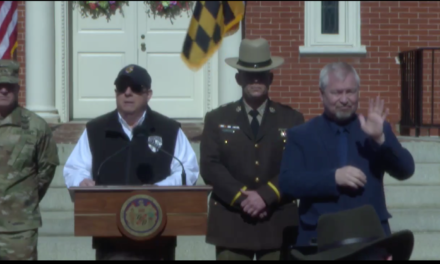 Hogan: All bars, restaurants, movie theaters and gyms in Maryland must close at 5 p.m.