Gonzales has Hogan winning 54% to 36%; the Post has the governor ahead 58% to 38%. Both polls found few voters undecided four weeks out from Election Day, 8% undecided in Gonzales, 5% by the Post.

Click here for a link to the Post story about the poll and the full results of the survey.

Click here for the full results of the Gonzales poll and below is the synopsis by pollster Patrick Gonzales. 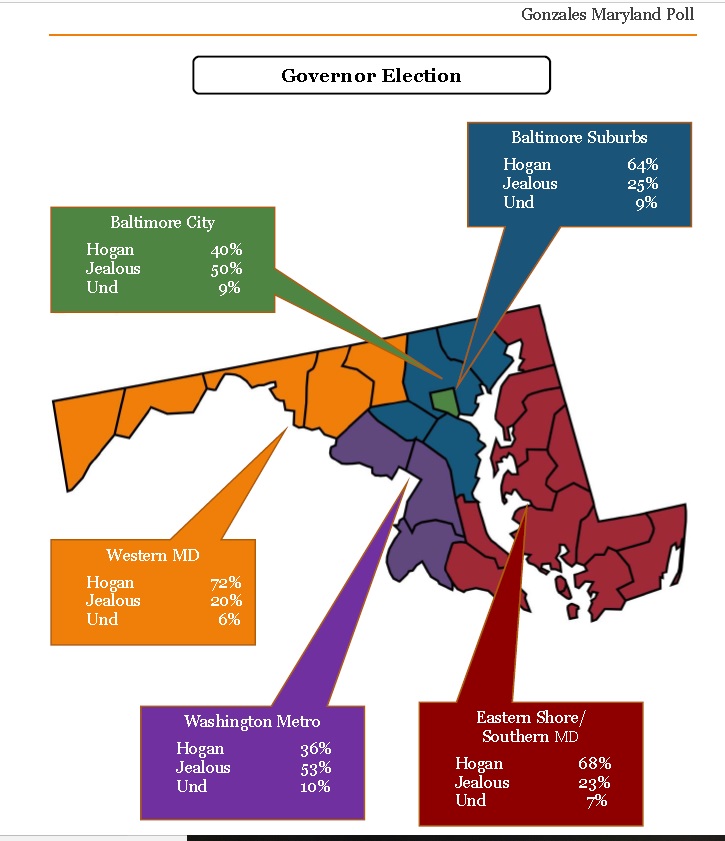 Free State voters are on the doorstep of reelecting a GOP governor for the first time since many liked Ike, and we all loved Lucy. If the election were held today, incumbent Larry Hogan would win in a romp, trouncing his Democratic opponent by a solid double-digit margin.

Hogan’s capturing a third of the registered Democrats in the state, 1-in-5 black voters, racking up huge margins in the Baltimore suburbs, the eastern, western, and southern parts of the Old Line State, and running dead even in traditionally liberal Montgomery County.

It’s not yet quite time to call in the Chesapeake Bay Retrievers and extinguish the campfire, but the hunt’s end is clearly drawing nigh. Since his surprisingly imposing victory in the June Democratic primary, first-time candidate Ben Jealous’ efforts to create electoral enthusiasm beyond his progressive base have produced bupkis. In the worst of times – the very worst political environment imaginable – a Democrat in Maryland begins the race with 40 percent…Mr. Jealous has not yet reached that minimum threshold a little more than a week before early voting commences.

The Jealous campaign held a press conference a few months ago and laid out a “path to victory” scenario (where, ironically, it felt compelled to share its own internal poll that had Jealous trailing significantly). The storyline set forth at the presser was that an aggressive grassroots effort was going to mobilize thousands of new progressive voters to the polls.

There most certainly is an impressive grassroots effort for Jealous underway right now, and it will be interesting to see to what extent this determination can translate disaffection, capped by Brett Kavanaugh’s recent confirmation and seating on the Supreme Court, into hard votes.

The unusual winds seem to be blowing against incumbent Attorney General Brian Frosh’s reelection campaign at the moment. Statewide, 43% of Maryland voters say they’d vote for Frosh if the election were held today, 34% say they’d vote for Republican challenger Craig Wolf, and 23% are undecided.

Frosh’s margin today is significantly less than it was a couple of months ago and down 20 points from a public poll released in September. But this is still blue Maryland, and it is hard to imagine Democrat Frosh being defeated, an upset that would shake the walls of quaint Annapolis to their very foundation.