Official estimates don’t back up Jealous figures on prison savings 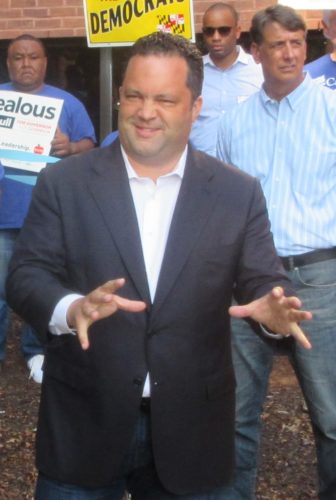 At the Aug. 10 opening of the Democratic Party headquarters in Columbia, Ben Jealous said he could reduce the prison population by 30% and “we can save $660 million a year.” MarylandReporter.com photo

Reducing mass incarceration and the number of inmates in Maryland prisons has been a key element of Ben Jealous’s Democratic campaign for governor from the start. By reducing the prison population by 30% over 10 years, he says “we can save $660 million a year” and use that money for education and other programs.

On the campaign trail, Republican Gov. Larry Hogan has been pushing back, calling the Jealous proposal “insane.” He told a crowd at a Dundalk headquarters opening Saturday that Jealous wants to “cut the public safety budget in half,” “release thousands of violent criminals” and “fire thousands of public safety officers.”

Jealous has a detailed 26-page plan for Criminal Justice Reform on his campaign website. Official estimates for savings by reducing Maryland prison population do not come close to the numbers Jealous uses.

The total budget for the Department of Public Safety and Correctional Services this year is $1.4 billion and for the Division of Correction, which runs the prisons, is about $775 million.

The only backing for the number Jealous uses extrapolates a figure found in a 2016 Washington Post opinion piece by a policy counsel for the American Civil Liberties Union. (CLARIFICATION: The ACLU says the estimate came from Public Safety Performance Project of the Pew Charitable Trusts.) That article discusses the Justice Reinvestment Act Hogan signed that year.

That law is expected to reduce Maryland’s prison population, which has been dropping for several years and now stands at about 19,000 inmates, the first time in 20 years it has been under 20,000. There are another 9,000 or more inmates in local jails, many awaiting trial or with short sentences.

In the final fiscal note on the Criminal Justice Reinvestment Act (page 25), the legislative analyst estimated that the net savings from the act would be about $47 million over the next eight years, reducing the number of inmates by about 5,100 or 25% — far more than the Jealous platform says it will achieve.

Much of the larger savings from reducing the inmate population are plowed back into prison system by the provisions in the act for more addiction treatment, education, counseling and job training for inmates — all expenses favored by Jealous.

The act also increases cost for services at local jails, but they would receive more state funding from the savings in the prison system.

The original 2015 report by the Justice Reinvestment Coordinating Council that led to the passage of the law the following year said: “If adopted, the Council’s consensus recommendations are projected to reduce Maryland’s prison population by 3,930 inmates over the next 10 years, averting $247 million in corrections spending. The Council strongly recommends that all these dollars be reinvested into programs and practices proven to protect public safety and reduce recidivism.”

That what the law does, but it only went into effect last October.

In an Aug. 20 interview, Hogan said, “I supported and sponsored and pushed through the first criminal justice reform in Maryland in decades. As part of that, we’ve lowered sentencing for possession, doubled the number of treatment beds, lowered our prison population more than the other 49 states in America. We’re number one in the country.”

“We’ve already gotten rid of most of the prisoners that would be under those descriptions. [Jealous] goes around talking about mass incarceration when we have the best record in America. It’s pablum, it’s just far left nonsense.”

Jealous cites his work as NAACP president in helping the states of Georgia and Texas in reducing the number of inmates, and even closing prisons in Texas. He has been critical of Hogan’s support for new laws for mandatory minimum sentences for violent offenders, which will add to the number of prisoners.

As part of the fiscal 2019 budget process in February, legislative analysts asked the Division of Correction to estimate the number of prisoners being released.

The written testimony from the department said: “The Department believes there will continue to be an increase in the number of releases over the next several years as a result of the Justice Reinvestment Act (JRA). However, the Department is unable to ascertain whether the population trend will continue on the same trajectory moving forward.”