BLUE CRAB FRAUD: Few things say local like the Chesapeake blue crab, Justin Jouvenal of the Post writes. It has scuttled its way into Maryland’s tourism slogan and is part of the region’s signature dish, proudly touted on menus and in markets as a taste of the Bay in an era when “eat local” has become the mantra of foodies. But a few years ago, a tipster reached out to authorities with an unsavory allegation: A major Virginia seafood supplier was selling packages of premium Chesapeake blue crab meat cut with cheaper foreign crab. It wasn’t even the same species.

OPPOSITION RESEARCH ON HOGAN: Larry Hogan likes the Zac Brown Band and the Washington Redskins and took donations from the pharmaceutical industry after opposing legislation meant to stop price gouging. He also may be simultaneously too Republican and not Republican enough, according to a 1,418-page opposition research document used by Democrats that was obtained by the Daily Record. Such reports are almost never talked about in public, writes Bryan Sears. The document, downloaded by the Daily Record from a website controlled by Democrats, potentially reveals a huge gaffe by that party as it seeks to unseat Hogan. Here’s the report.

DEMS LAUNCH ALL-OUT CAMPAIGN FOR JEALOUS: On Saturday in Prince George’s, Baltimore, Montgomery, Frederick and Anne Arundel counties, the state Democratic Party launched a coordinated campaign for Ben Jealous. Volunteers fanned out to knock on 5,000 doors to help Jealous, one of a wave of nationally known progressives who handily won their primaries, Ovetta Wiggins and Robert McCartney report for the Post. The former president of the NAACP faces Gov. Larry Hogan, who has remained popular in part by distancing himself from Trump.

HOGAN OPENS CITY CAMPAIGN HQ: Four years ago, Republican Larry Hogan got 22% of the vote in deep-blue Baltimore — a jurisdiction he failed to gain traction in during his successful run for Maryland governor, reports Luke Broadwater in the Sun. This year, Hogan’s campaign team thinks he can do better in Charm City. The first-term governor opened a Baltimore campaign office Saturday on North Avenue in what was once a vacant bank over which a billboard read, “Whoever Died From a Rough Ride?” in reference to the death of Freddie Gray in police custody in 2015.

HOGAN IN N.Y. TIMES: Gov. Larry Hogan is interviewed by New York Times columnist Frank Bruni over a lunch meeting last Wednesday at Government House. While Bruni tended to keep the interview on topics about and surrounding President Donald Trump, Hogan kept trying to bring it back to Maryland.

RENEWABLE POLICY MOVES STATE FORWARD: Bruce Burcat, of the Mid-Atlantic Renewable Energy Coalition, writes in an op-ed in the Sun that over the last decade, power generated by wind and solar has become a growing portion of Maryland’s electricity each year. More people now work in Maryland’s wind and solar industries — over 5,500 — than the state’s crab industry, and in 2017 alone wind energy generation avoided 1.1 million metric tons of CO2 pollution in the state. Despite this, a new report by the Chesapeake Physicians for Social Responsibility incorrectly claims that Maryland’s energy policy is causing the state to go backward on building a clean energy economy.

RIGHT & WRONG ON BAY CLEANUP: The editorial board for the Sun opines that last week’s Board of Public Works meeting turned into a real gripe session about Pennsylvania, the Conowingo Dam and efforts to clean up the Chesapeake Bay. Gov. Larry Hogan and his state comptroller sidekick got some things right in their scripted several minutes of ire in front of the cameras, but they got some important stuff wrong, too, says the Sun.

ON GUN CONTROL: Chase Cook of the Annapolis Capital talks to a number of politicians about their views on gun violence and prevention following the killing of five Capital Gazette staff members in June by a lone gunman. The editorial board has called for stricter gun control. U.S. Rep. Ben Cardin, Gov. Larry Hogan, Democratic gubernatorial candidate Ben Jealous, County Executive Steve Schuh and his Democratic opponent Steuart Pittman all expressed their views.

THE RUSSIANS ARE HERE: In a column for his Political Maryland blog, Barry Rascovar writes that the Russian threat is all-too serious — and Maryland could become Ground Zero in the Putin regime’s quest to disrupt and disillusion Americans when they go to the polls Nov. 6. Yet the panic has not set in. There’s a very real chance Russian ownership of a Silver Spring data center holding a treasure trove of State Election Board information on voters and vote results could lead to nefarious interference with the voting process, if not the actual election returns.

STATE HOUSE TUNNELS: Under the floors where lawmakers convene and the asphalt and dirt of the surrounding land, a team of workers connected by a tunnel system labor to keep legislators and Annapolis residents informed about the ongoings overhead. These tunnels are also how legislators slip between the State House and their offices — or to lunch — without being seen by protesters and common folk outside. Selene San Felice of the Annapolis Capital writes about the tours under the dome.

PG NONPROFITS FAIL TO FILE WITH STATE: Rachel Chason of the Post reports that more than a dozen nonprofits that received grants this year from the office of Prince George’s County Executive Rushern Baker had not filed required paperwork with the Maryland Department of Assessments and Taxation as of Friday afternoon, prompting criticism of how the Baker administration oversees those funds.

PG ACTIVIST SEEKS WRITE-IN VOTES: Prince George’s County activist Tamara Davis Brown is accustomed to going outside the usual political channels. Over more than 15 years, Brown has cultivated an email group of 5,000 members that she uses to explain how local government affects residents’ daily lives — in a way she hopes will keep them reading. Now Brown, 50, is again bucking tradition, running as a write-in candidate for the District 9 County Council seat against Clerk of the Court Sydney Harrison, who defeated her by 55 votes in the June 26 Democratic primary, Rachel Chason reports for the Post.

FROSH WEIGHS IN ON BLADENSBURG CROSS: Maryland’s attorney general has asked the U.S. Supreme Court to preserve a controversial cross-shaped memorial on public land, weighing in for the first time about the future of the Peace Cross that honors men killed in World War I, writes Erin Cox in the Post.

UNEASY PEACE ON DEL. ANDERSON: Maryland Democratic Party chairwoman Kathleen Matthews has brokered an uneasy peace between women’s groups urging party officials to take an aggressive stance against state Del. Curtis S. Anderson (D-Baltimore City) – who has been accused of sexual misconduct – and leaders of the Legislative Black Caucus seeking due process for their embattled colleague, reports Josh Kurtz for Maryland Matters. Whether the controversy spills into the fall campaign or dampens Democratic turnout remains to be seen.

GUINNESS OPENS U.S. BREWERY: Before the new Guinness brewery opened Friday in Baltimore County, friends Dwayne Jenkins and Ryan Foley worried that the line was so long they might not make it in. Then the gates opened, and hundreds came pouring in. Within an hour, 1,000 people had entered, reports Luke Broadwater of the Sun. They had good reason: Guinness was opening its only brewery in the United States, and the legendary Irish brewer had picked the Baltimore region to call home.

FLOREEN UPBEAT ON SIGNATURE COLLECTING: On Friday, Montgomery County executive hopeful Nancy Floreen was optimistic that she would be able to collect enough signatures by today’s deadline to earn a spot as an independent candidate on the November ballot. Bethany Rodgers reports in Bethesda Beat. Her canvassers have spent the past month or so staking out grocery stores, farmers markets and business gatherings to amass the requisite 7,243 names, a total that represents 1% f the county’s electorate.

NAME CHANGE FOR MO CO BOOZE DEPT. Montgomery County officials are hoping to change the name of the county’s Department of Liquor Control to something, well, a little less controlling. The proposed name — Alcohol Beverage Services — reflects an effort to move the department’s image away from its regulatory focus and toward customer service, said director Robert Dorfman, a former Marriott executive appointed by County Executive Ike Leggett (D) at the end of 2016, reports Jennifer Barrios of the Post.

SUN MOVES FROM CALVERT STREET: As the Sun moves its offices from Calvert Street to Port Covington, Jean Marbella of the Sun says goodbye to the building that has been the historic home for the newspaper for 68 years. “Goodbye train tracks that delivered newsprint right into the building. Goodbye ghost of H.L. Mencken. Goodbye THE SUN sign that glowed for I-83 drivers. Goodbye red brick walls. Goodbye bands of green-tinted windows. Goodbye Calvert Street.” 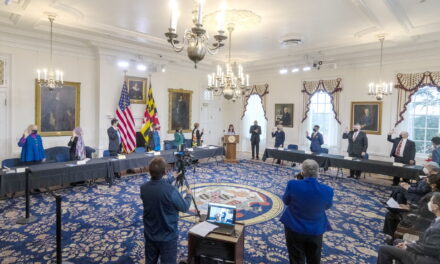