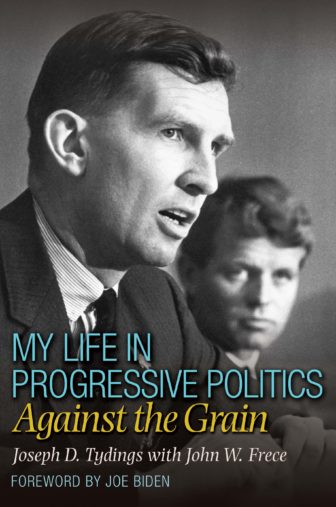 My Life in Progressive Politics: Against the Grain by Joseph D. Tydings with John W. Frece, Foreword by Joe Biden

If you read but one political autobiography in the next 10 years, make it this one, for sure!

And don’t rush your reading, but instead take your time, savoring every single word, no matter how long it takes—it’ll be worth it, for it’s that good, really! I can’t say enough good things about this fine historical work.

Indeed, it would take 10 reviews of it, and still justice wouldn’t be fully done to it, even with its flaws!

Having known about the subject since 1970, I thought that I had a pretty good handle on him, but no more! This exceptional tome provides readers with knowledge all about the man before, during, and after that date, right up to now.

That man is one I didn’t know of at all, and I suspect that the very same will be true of most readers also. This well-crafted work is several terrific volumes: Maryland, United States, and world history all rolled into one.

It’s told with a first person, you-are-there, fly-on-the-wall immediacy, in a little-held- back personal memoir that grabs the reader in the very first paragraph on page one—and then never lets go.

What a wild ride it is, too.

On the more substantive level—and described in riveting detail as well— are  assassinations, state and federal criminal cases tried in open court, an earlier savings & loan scandal prior to that of 1986, bribery, corruption, etc.,  as viewed from the perspective of both an elected official and as U.S. Attorney General Bobby Kennedy’s hand-picked U.S. Attorney for Maryland. Joseph Davies Tydings, still living at age 90.

One highlight occurred when Tydings called as a surprise witness for the prosecution the attorney general of the United States to a shocked federal courtroom in downtown Baltimore that led ultimately to the convictions of two congressmen.

Just a few years later, both Kennedy and Tydings sat side by side as backbench elected U.S. senators in the wake of the murder of President John F. Kennedy, a seismic turning point in both their lives.

As a biographer myself, I’m amazed that our subject waited until he was 85 to start on this incredibly engaging epic. I’m glad that he didn’t dither any longer.

Born May 4, 1928, Joe Tydings loved the outdoors and was an athlete for most of the first half of his life: a lacrosse starter at his beloved University of Maryland– an institution at which he’s been almost continuously active since 1948 — and playing on a U.S. Senate tennis team that beat a GOP team led by then vice president and fellow Marylander Spiro Agnew.

As his 1964 Senate brochure touted, Joe Tydings had already “Crossed the Atlantic eight times” by then. Having lunched in West Germany with its chancellor Willy Brandt and Walt Disney—“I was amazed at how much had been built since 1946,” when he’d served there under Gen. George Patton as part of the American Army of Occupation. He took care of 37 horses as part of the Army’s last cavalry unit.

Tydings journeyed to communist Poland, noting, “I was impressed how deep was the Poles’ hatred of Communism.” As a young U.S. senator—only 36—his new staff “Churned out press releases on almost a daily basis.”

Author of the 1970 tome Born to Starve, this latest literary effort features not only a great selective bibliography, but also detailed and very informative footnotes that are—if anything—even better than the main text, and I’ve read them all.

His personal anecdotes are telling, sincere, and gripping, such as this on the murdered John F. Kennedy: “The President was someone who’d slept in my home…He’d eaten dinner at my table, seated between my wife and my mother. He and his wonderful family had become real friends…He was my most important political benefactor…We had campaigned side by side. Had he not been assassinated, I might’ve run unopposed for the U.S. Senate in 1964.”

When he did get there, Tydings was “Someone considered as close to being a Kennedy as anyone in the Senate not named Kennedy.” That proved to be a double-edged sword, however, getting him in it in ’64, but it also helped get him out six years later, when he lost his bid for reelection.

It didn’t help, either, that by then he was having an affair on his first wife with the woman who would become his second wife. It was she, he asserts, who “persuaded” him to run against Paul Sarbanes who defeated him in his 1976 bid to return to Capitol Hill. The second wife doesn’t even rate a name here, though, while the third wife also isn’t noted as a spouse after 1999, according to an online citation.

Interestingly, the limousine liberal of the Sixties re-emerges in this volume’s title as the progressive of the young 21st Century, with his picture along with Bobby Kennedy nicely tying with the 50th anniversary of the latter’s slaying.

Most of Tydings’ public career was spent in lawyering, not legislating, but I admit that his riveting accounts of our various levels of courts made me read more about them than I’ve ever done previously.

Here’s but one splendid sample: “The federal courtrooms where we plied our trade as prosecutors were always full of colorful witnesses, zany defendants, celebrity lawyers, unrepentant gamblers, politicians under stress (and sometimes their angry or weeping wives), clear-eyed federal investigators, tax cheaters, bank robbers and car thieves, experts in such arcane topics as handwriting, wise and thoughtful judges, and even pitiful kidnappers and murderers. In those courtrooms, we were witnesses to a carnival of life.”

As, indeed, are we readers of this compelling work. In addition, this broad-based saga includes 55 terrific black-and-white illustrations from private Tydings family and other unique photographic sources.

Towson author Blaine Taylor went door-to-door in Baltimore’s Govans neighborhood for Tydings’ 1970 re-election bid, covered two of his events later as a reporter, interviewed him one-on-one the next year for the Towson State College student newspaper The Towerlight, and observed his 1976 Senate election effort in Dundalk. Taylor is also a repeat candidate for U.S. Senate, this year as a Republican.

Some Md. members of Congress keeping their pay, others are not