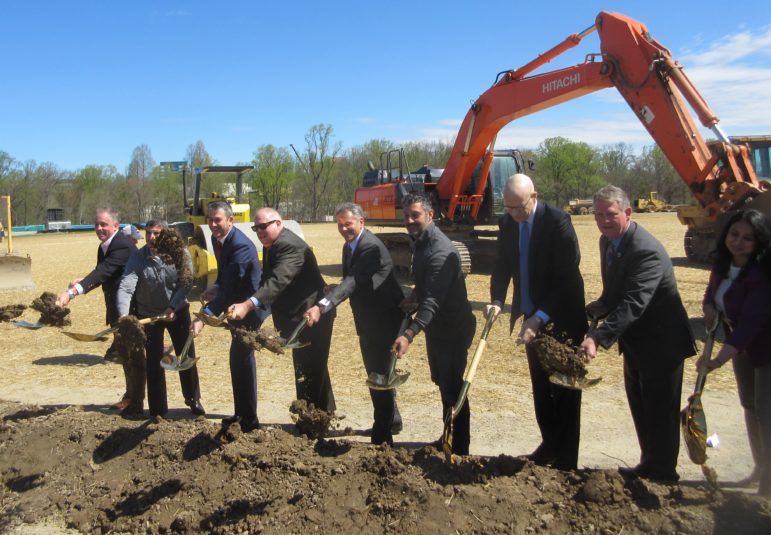 MERRIWEATHER GROUNBREAKING: They’ve been talking about building a dense urban center for Howard County in Columbia for only about 54 years now. Monday that promise came one big step closer as Gov. Larry Hogan joined local officials and corporate executive for the splashy groundbreaking of the first mixed-use project in the new Merriweather District. It will be anchored by cybersecurity firm Tenable in 12-story office building along with apartment buildings and ground level retail. Photo by MarylandReporter.com

MARYLAND JOINS VEHICLE EMISSIONS SUIT: Maryland, along with 16 other states and the District of Columbia, is suing President Donald Trump’s administration, demanding it leave in place vehicle emissions standards adopted under President Barack Obama, reports Scott Dance of the Sun.

UM COFFERS GET $39 MILLION HIKE: The Maryland General Assembly concluded its legislative session April 11 by approving a budget increase for the University System of Maryland, which was proposed by Gov. Larry Hogan. The university system will receive a $39 million increase, totaling a $1.39 billion annual budget, Kaanita Iyer writes for Maryland Matters.

HOGAN ORDERS DAM NUTRIENTS CUT: After years of study and haggling over how to deal with the impact of Conowingo Dam on the Chesapeake Bay, the Hogan administration has ordered the hydropower facility’s operator to reduce nutrient pollution passing through the dam on its way down the Susquehanna River – or pay up to $172 million a year for someone else to do it, the Bay Journal’s Timothy Wheeler reports in MarylandReporter.

OAKS BALLOT ISSUE IN COURT: Maryland’s highest court will hear arguments today on whether next month’s primary election ballot should include the name of former Sen. Nathaniel Oaks, the Baltimore Democrat who resigned his seat on the same day in March that he pleaded guilty to federal corruption charges. Due to a quirk in the timing of his guilty plea, Oaks’ name was set to remain on the June 26 Democratic primary election ballot, writes Ian Duncan for the Sun.

PG SCHOOLS CHIEF TO QUIT: Embattled Prince George’s County schools chief Kevin Maxwell will leave his job some time after the end of the school year, relinquishing the helm of Maryland’s second-largest district in the wake of scandals that left critics questioning his judgment and leadership, the Post is reporting.

HOGAN FUND-RAISES AT NATS GAME: Gov. Larry Hogan (R) will be at the Washington Nationals game with the Pittsburgh Pirates Thursday afternoon – raising money, writes Josh Kurtz for Maryland Matters. Hogan will be in a luxury box furnished by the financial services company Capital One, according to an invitation for the fundraiser.

FORMER DEL. WORKMAN DIES: Betty Workman, a former Allegany County educator and member of the Maryland House of Delegates, died Tuesday, reports Greg Larry in the Cumberland Times-News. Words of respect and praise came in from colleagues as news of her death became public.Workman was a delegate for three terms from 1987 to 1999 and represented District 1B. She was also a mathematics teacher at Allegany High School for many years.

McDONOUGH OFF THE AIR: Del. Pat McDonough said his radio show on WCBM is on hiatus as a result of a complaint filed with the station by Al Redmer Jr., the state’s insurance commissioner, Bryan Sears of the Daily Record reports. Both men are seeking the Republican nomination for Baltimore County executive in the upcoming June primary.

DEPORTATION ISSUE DRAWS CROWD: Dozens of people testified at a public hearing in Montgomery County on Tuesday night over the county council’s proposed move to spend public money on attorneys for immigrants facing deportation, Jennifer Barrios of the Post reports. The council didn’t take action on Tuesday at the meeting, held in the council’s hearing room before an audience that filled the seats and overflowed into the back aisle — a final vote on the measure has not yet been scheduled.