A ceremonial capping off of an oyster restoration project in Maryland's Harris Creek took place in 2015. The future of federal funding for such projects in Maryland and Virginia is uncertain. Photo by Dave Harp, Bay Journal

With the General Assembly session over, MarylandReporter.com is going to catch up on some postings on the Chesapeake by our partners at the Bay Journal.

Oyster restoration in the Chesapeake Bay faces an uncertain future because the federal budget recently passed by Congress failed to provide any dedicated money to continue reef construction in either Maryland or Virginia.

But the omnibus spending bill for fiscal year 2018 — approved March 23 and signed the same day by President Trump — marks the second year in a row with no specific appropriation for the Corps to continue reef restoration in the Bay.

The omission threatens to stall work already under way in Maryland’s Tred Avon River. It also jeopardizes future projects in both Maryland and Virginia where the federal government had been expected to take the lead.

Supporters of the oyster restoration effort say they hope the Army Corps can still put some money toward it this year from a $1 billion pot of discretionary funds Congress approved for the Corps’ construction program.

Sen. Ben Cardin, D-Md., explained to a group of Bay advocates recently that he and others were unable to designate money for oyster restoration in the appropriations bill because congressional rules forbid earmarking funds for anything not proposed in President Trump’s budget.

But he noted that Congress approved more construction funding for the Corps than the Trump administration proposed. Eugene Pawlik, a Corps spokesman, said the total was about double the requested amount.

Cardin expressed optimism that the extra money will prompt Corps leaders to allocate some of those funds toward the effort this year.

The omnibus spending bill did urge the Corps to request funds for Bay restoration in future budgets.

After meeting March 29 with senior Corps leaders for a tour of Poplar Island, a restoration project using dredged material from the Bay, Cardin said that he is “pretty confident” some of the extra money put in the Corps budget will go for oyster restoration.

It won’t be known until perhaps May 22 if that gambit paid off. That’s the deadline for the Corps to submit its work plan to Congress. The plan, due 60 days after the omnibus bill’s passage, will lay out planned expenditures on projects specifically listed in the legislation. The Corps can add some of its extra funds to those projects, as well as spread some money among projects not designated for funding.

Cardin acknowledged that it’s still possible, given the nationwide competition for federal public works funding, that the Corps won’t designate any money for oyster restoration. Its work plan must be reviewed by the White House Office of Management and Budget before being submitted to Congress, he noted, which also may have a say in the matter. 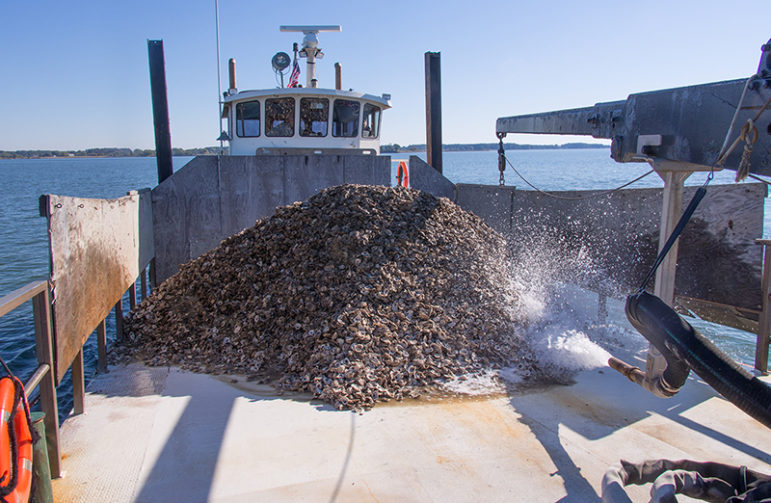 Bay advocates said that the uncertainty surrounding oyster restoration funding has roots in a controversy two years ago, when Maryland officials put a hold on the Tred Avon project after watermen objected to the Corps’ use of granite to build the reefs there.

“Now, we’re sort of reaping the consequences of those delays and those challenges to the Corps’ efforts, in the fact that there’s no appropriation,” said Allison Colden, a fisheries scientist with the Chesapeake Bay Foundation.

From the mid-1990s through fiscal year 2016, the Corps had received annual funding for oyster reef construction in the Bay, with the Baltimore District getting a cumulative total of $28.8 million, according to figures supplied by Cardin’s office.

In 2014, in recognition of the ecological value of oysters and their reefs to the overall health of the Chesapeake, the Bay watershed states and federal government jointly pledged to restore native oyster habitat and populations by 2025 in five tributaries each in Maryland and Virginia.

The annual funding stream ended two years ago, when then-President Barack Obama requested no money in the Corps’ fiscal year 2017 budget for Bay oyster restoration. That came shortly after the Hogan administration had prevailed on the Corps’ Baltimore District to halt work in the Tred Avon.

The request came after a small group of watermen complained to Lt. Gov. Boyd Rutherford about the cost and efficacy of the restoration effort, particularly the methods and materials used. 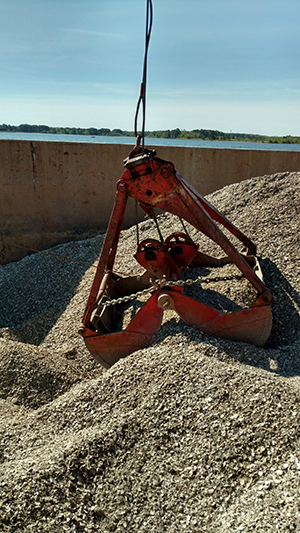 Watermen objected to the use of granite to build reefs in the Tred Avon and in an earlier restoration project in Harris Creek, another Shore tributary. They contended that the stone reefs snagged fishing gear and damaged boats, and that oyster shells are the best surface on which spat, or baby oysters, can settle and grow.

Scientists countered that oyster spat will do well on any hard surface in the water, and monitoring on Harris Creek reefs later that year found a much higher density of new oysters growing on granite than on shells.

At the time, Cardin warned that the stoppage could threaten future federal funding for oyster restoration in Maryland. It had immediate impact, as the Baltimore District shifted $1 million it had for that purpose to the Norfolk District. With that extra money, and no major reef construction planned this year in Virginia, the Norfolk District is not yet as strapped.

A spokesman for the Department of Natural Resources called the Tred Avon stoppage then a “pause” until the DNR could complete an internal review of the state’s oyster management.

The Hogan administration lifted its hold on the federally funded project, and work resumed in the Tred Avon in April 2017, more than a year after it had been interrupted. Even then, the state insisted that the Corps not use any more granite in constructing reefs. The Corps opted to build the reefs with clam shells from a processing plant in New Jersey, but the contractor couldn’t get enough shells. Only six of the 10 acres of reefs planned to be built that year were completed.

The Bay Foundation’s Colden said that while she’s hopeful the Corps will allot some money for reef construction this year, federal funding is no longer guaranteed.

“Now, the priority we place on oyster restoration in the Chesapeake Bay has to compete with Mississippi River flood control and dam operations in the Pacific Northwest,” Colden said. “Before, we had a dedicated pot of funding because it’s been recognized as such a significant project and significant priority.”

While Cardin expects Corps officials to put some of this year’s discretionary funds toward oyster restoration, given the extra money in their budget and a clear statement of congressional intent, he expressed dissatisfaction with having to go through such maneuvers.

“It’s not a very transparent way of doing things,” he said. And he noted that supporters in Congress will have to fight the same battle again later this year, because Trump’s proposed budget for the fiscal year beginning Oct. 1 did not contain any money for Corps reef-building.

Meanwhile, Maryland has identified Breton Bay, off the Potomac River, as one of its last two restoration tributaries, and wants the federal government to take the lead in rebuilding reefs there. Costs for that have yet to be estimated.

There’s a lot at stake in finishing what’s been started, and federal funding is needed, said the Bay Foundation’s Colden. Small-scale reef restoration projects in the past haven’t made much of a dent in the Bay’s historically low oyster population, she noted.

“The large-scale restoration projects that we are pursuing now are sort of a change in the way things used to be,” Colden said. “This is the first time we’re seeing benefits [compared with] those previous projects that never panned out.”