This is the fourth part of a special project by the Capital News Service, “Reforming the Force: Can a broken police department operating under a federal consent decree be repaired?” Mayor Catherine Pugh fired Baltimore Police Commissioner Kevin Davis last Friday, leaving department veteran Darryl De Sousa as the new commissioner facing the task. Some think a focus on people, training and technology will work, but critics aren’t so sure.

By Chris Miller and Helen Parshall

In East Baltimore’s Butchers Hill, neighbors worry about muggings and stolen bikes. A few miles away, in Belair-Edison, residents fear shootings are on the rise. Across town, in Seton Hill, people worry about property theft.

Baltimoreans say they are tired of crime. They say they want the police to do something about it, and that they want to be able to trust the officers.

But that’s not easy when the police force is under federal orders to reform itself, the homicide count has topped 300 yet again, and crime is an issue in every part of the city.

Police officers have often stopped individuals, especially those of color, without reasonable suspicion and have also used excessive force, a U.S. Justice Department investigation found in 2016.

“There’s no protection on our end” when calling the police, said Terrence Briscoe, 39, who lives in the Montebello area of the city. “So people in the city are really kind of afraid to talk to the police.”

Shantay Guy, the director of Baltimore Community Mediation Center, an organization that offers free mediation services to all Baltimoreans and works to build relationships between police officers and the community, has conducted listening tours around the city.

But there was one key similarity.

“You’ve got non-white residents saying that safety and trust is something that’s important to them,” Guy said, “and you’ve got law enforcement officers saying they value the exact same thing.”

The legacy of zero tolerance

Scott said that in the late 1990s and 2000s, the practice of “zero tolerance” policing began to contribute to the breakdown between officers and the community.

Under this strategy, the police focused on every crime — no matter how small — which led to many arrests for minor crimes. The goal of this practice was to reduce major crimes in the city by aggressively targeting all levels of crime. Scott believes that this practice is partially responsible for the current consent decree.

“You can’t go through those years of locking up so many people, and many of them for very minor things, and then not think it’s going to have a lasting impact,” he said.

But he said his neighborhood works well with police.

“In Frankford, you are more likely to hear someone say there’s not enough police in the neighborhood than to have them say something negative,” he said.

Shahem McLaurin, 23, lives in McElderry Park, a lower-income neighborhood near the Johns Hopkins Medical Campus in East Baltimore. The area, he said, is heavily surveilled by officers.

“Poor black communities are often hyper-policed,” said McLaurin, who is organizing a non-profit to help city youth. “I can go into Canton and stroll for three hours, and see maybe one police car — whereas, in my neighborhood, it feels like there’s one on every corner.

“And it’s not like we feel this out of nowhere,” McLaurin added. “It’s like they’re everywhere we are.”

Mike Hilliard, a 27-year veteran of the Baltimore Police Department who retired as a major in 2003, views the relationship between the force and community differently in certain parts of the city.

Hilliard, now the community services director at Harbel Community Services, worked in a number of police districts and areas of the city before his retirement in 2003.

He said that crowds at crime scenes can make officers’ work more difficult. “If every time you were in public doing your job, someone is jamming a cell phone in your face, does that affect the way you do your job?”

An uptick in violence

But during the last six months, there has been an uptick in violent crimes, especially shootings. In September, at least four people died from shootings, she said, which police confirm.

About 19% of family households in the northeastern neighborhood live below the poverty line, according U.S. Census Bureau data compiled by the Baltimore Neighborhood Indicators Alliance.

The increase in violence could be due to the fact that Belair-Edison has some renters who “don’t have a sense of connection to the community,” Delgado said, as well as others who are in the neighborhood without any ties to it.

Within the last six years, the commanding police major in the district has changed three times, she said — which the police acknowledge.

“That complicates things,” she said, “because the major of the police is basically the person that’s setting up the patrols and managing how officers are working in the community and so if that shift happens so quickly then it doesn’t allow things to stay consistent.”

Seton Hill is one of the “most diverse” neighborhoods in Baltimore, said Nicholas Blendy, 38, president of the Seton Hill Association. About 31% of residents are black and 47% are white, according to data compiled by the Baltimore Neighborhood Indicators Alliance.

Only about 5.5% of family households in Seton Hill and the neighboring downtown area live below the poverty line, a much smaller proportion than in Belair-Edison.

Blendy said the main crime that he has seen is property theft, especially property in cars. He said that sometimes kids who are cleaning car windows in the northwest corner of the neighborhood will steal purses or bags from inside vehicles.

In the area, poverty is connected to crime, said Blendy, the majority centered around the McCulloh Homes, one of the largest remaining public housing sites.

“It’s basically several blocks of concentrated poverty,” he said. “If you put a bunch of poor people anywhere in the world, surround them by well-to-do neighborhoods, that’s where they tend to commit crimes for economic gain.”

The LGBT community in Baltimore, while not a geographical neighborhood, often is afraid to trust the police in Baltimore, said Rev. Merrick Moses, a 20-year resident of the city.

Moses sits on the Baltimore Police Commissioner’s LGBT Advisory Council and is also the president of the DC-Maryland chapter of Black Transmen Inc., a national organization that works to empower and support African-American transgender men.

In his work, Moses said that he has seen and heard a lot from queer and transgender Baltimoreans who are “deathly afraid of the police” and as a result, don’t report when they have been victims of crimes.

Transgender people “feel like they can’t really trust the police because they’ll be misgendered or they’ll be disrespected,” Moses said. “Some trans women in Baltimore have reported to me they feel like the police are out to get them.”

Moses referred to the 2016 Department of Justice report that preceded the police department’s consent decree, which described incidents where transgender people reported “degrading and dehumanizing” incidents with officers.

“It’s kind of like racism,” Moses added. “You can have a black police chief, but there are still people who have race issues on the force. This is a culture shift and it is a generational shift that must happen over time.”

‘Let the police engage the crime’

The consent decree encourages “community policing,” a strategy that encourages officers to get to know the neighborhoods they work in and be involved in community activities.

But for Tony Barksdale, a retired Baltimore deputy police commissioner who grew up in West Baltimore, the idea that communities need to have interactions with the police and get to know them is “feel-good crap.”

“Right now in Baltimore City, there’s some serious work that needs to be done against the criminals,” he said, “so I would rather the community stay back and let police engage the crime.”

“I’m going to build ties with you when you see I’m out there for you,” he said.

When he was a kid, Barksdale said, he and a friend were flying kites in his elementary school playground when several teenagers tried to rob them.

A police officer pulled up and yelled “Police!” and the would-be thieves started running, Barksdale said. The officer came to the field, showed the kids his badge and said, “Are you guys okay? I’m taking you home.”

“That’s policing to me,” said Barksdale. “I didn’t need to know who he was.” 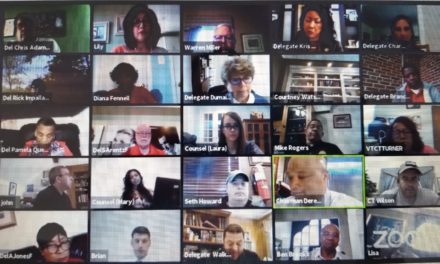