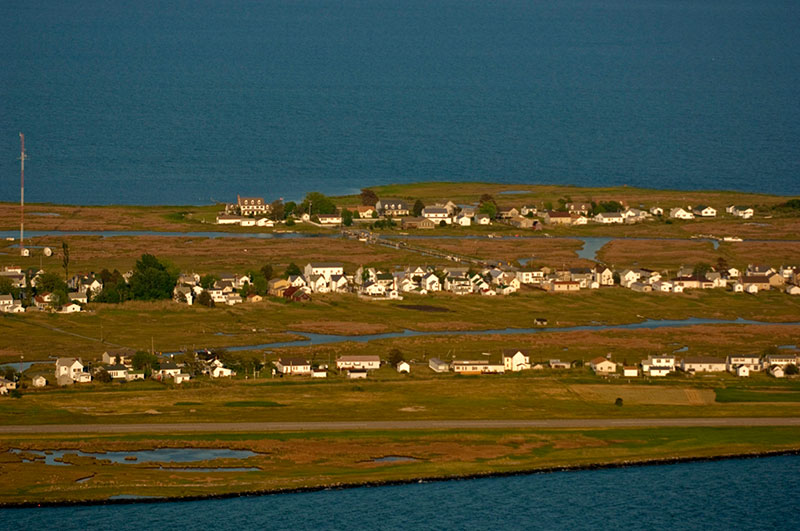 When I began a documentary film this year about climate change and the Chesapeake, I knew that even though local residents were affected by it, I’d never be able to record most of them talking about sea level rise.

They know what they see. And around Dorchester — Maryland’s lowest-lying county and the focus of our film — residents see erosion of the shoreline, high tides that seem to come more often and forests dying along the marsh edges.

It’s easy to talk past one another, we who are comfortable with the lingo and concepts of climate science, and those who are not — even while all talking about the same thing.

This was on my mind recently when my friend, James “Ooker” Eskridge, the mayor of Tangier Island, Va., appeared on a CNN Town Hall with former Vice President Al Gore, one of the world’s foremost proponents of how humans are warming the planet.

Eskridge, who’s not convinced that this is really happening, was invited on the cable TV show because of a phone call he got earlier this summer that brought him in early from fishing his crab pots.

A phone call from the president

The caller was President Trump. He’d heard about Tangier’s plight: battered by erosion that will soon spell its demise if it can’t find an estimated $25 million to $30 million to bulwark its Bay shore with rock. He’d also heard that the island of some 400 residents, with a culture harking back to 17th century England, had voted nearly 90% for him last November.

Ooker heard Gore out, but maintained: “I’ve lived there 65 years and I just don’t see it (sea level rise).”

I talked about the disjunct between the two men with Michael Scott, a colleague at Salisbury University and a professor of geography whose specialty is environmental hazards.

He and I are both in Gore’s camp on climate; but Scott has as good a feel as any scientist I know for explaining the nuances and complexities of such global, long-term phenomena at the level of the average citizen.

“I was upset that CNN portrayed (Eskridge) as this sort of pro-Trump nut job,” Scott said. Eskridge is not wrong at all when he says Tangier’s problem is erosion, the professor said, adding that it’s happening very quickly and is very noticeable.

“But there are really two processes going on and they are not separate,” Scott added.

The second process he refers to is sea level rise, propelled by a warmer climate that is melting glaciers. That’s exacerbated by land around the Bay sinking back to its original contours after being pushed upward by the glaciers that extended into Pennsylvania during the last Ice Age.

Add to that the thermal expansion of the oceans as they warm and the potential slowing of the Gulf Stream that could back up more seawater in the Chesapeake.

Rising sea levels make erosion worse. But Scott’s not at all surprised that Tangier’s mayor said that he “didn’t see it (sea level rise).”

Sea level rise at this point, unlike erosion, “is happening very slowly,” coming up mere inches throughout Eskridge’s lifetime on the Chesapeake.

But the overwhelming scientific consensus, he continued, is that the Earth’s temperatures have reached the point where a measurable acceleration in sea level is under way. In the Bay, it will add 2 feet or more to everyday tides by around 2050.

The forecasts for 2100 are less certain because we can’t tell how fast the massive ice sheets of Antarctica will melt. But estimates foresee everyday tides 5.5 feet above present levels, “and that’s probably on the low end . . . every time we look at it, it seems our estimates are too low,” Scott said.

A couple wrinkles disguise the coming impact further, he said.

First, it is quite possible for waters locally to shallow up as seas rise. In our filming, we’ve found examples of this in Dorchester County. The sediment eroding from shorelines and disintegrating marshes has to go somewhere, and it may fill in channels and other places where currents carry it.

The larger complication, Scott said, “is that sea level rise is not linear.” In other words, it isn’t going to happen steadily, inch by inch, over the years. That would be relatively easy to predict and respond to.

Unfortunately, the path to 2, 3, 5 or more feet of daily tide around the Bay is going to resemble a curve that steepens as average high tide levels rise.

“The trouble with an increasing curve is that for a while, things will seem as if they’re OK, but then the rate’s going to really increase and you’re going to lose the ability to adjust to it,” Scott said.

Helping localities around the Chesapeake adjust is where Scott’s passion lies; and he said we’re still at a point on the curve where we can act reasonably and cost-effectively.

“This (Delmarva) Peninsula is very precious to me and to my family . . . we want to preserve it for our children and we can do that if we are honest with what’s happening and with how we can try to respond,” he said.

He finds most people don’t care too much about why the tides and the erosion are getting worse, or about the politics of climate change.

“They want to know what is going to happen to them and what they can do about it,” Scott said. For many, the real threat won’t come in their lifetimes, and they aren’t likely to pay tens of thousands of dollars to jack up their houses.

The key he said, is to honestly acknowledge the threat and install public policies that over time guide “the way that development takes place, rearrange the way people build their homes, the way roads are maintained.

“And as we lose marshes we are going to need spaces on the landward edge for them to move into. . . . We’re going to need to buy the development rights to such places from the people who own them now . . . a very appropriate response.”

In low-lying places like Dorchester County, he said he thinks that “if we can get a hold of this in the next five to seven years, we have time to fix it that way. If we wait, then we will be in crisis mode, and things are going to happen in a very shocking and upsetting way.”

As for Tangier Island, it won’t make much difference now whether Mayor Eskridge and his townspeople vote yea or nay on closing coal-fired plants to reduce the long-term buildup of carbon dioxide in the atmosphere. Tangier needs rock, pretty soon, and no change in energy policies is going to change that.

Even the best seawall at Tangier is not the same as a dike, which would cost hundreds of millions of dollars and realistically isn’t going to happen. Even less likely are Trump’s assurances to Eskridge that his island would persist for “hundreds more years.”

But a seawall would buy time for another generation or two of Tangier residents to continue the island’s unique culture and heritage, time enough for hundreds of thousands of us to visit and enjoy that — a reasonable investment in my opinion.