One of the items at Thursday’s Buy Local Cookout on the governor’s front lawn was fried wild blue catfish cakes prepared by Congressional Seafood of Jessup. This nonnative catfish is now considered an invasive species in the fresher waters of the Chesapeake Bay and its tributaries — a designation sport fishermen hotly dispute. Congressional Seafood markets the fish as both tasty and a way to help the ecosystem of the Bay.

Here below is the Bay Journal’s 2014 story on the last full-blown study of the blue catfish problem.

MarylandReporter.com had a 2015 story on bill attempting to control invasive fish, which eat the native species. The bills failed in committee.

New USDA inspection rules that hold foreign imports to U.S. standards could threaten that growing market, Pamela D’Angelo reports for WYPR. Blame it on Mississippi Congressman Thad Cochran, who was trying to protect local catfish farmers who were feeling the pressure of Asian imports.

A draft report from a task force that spent more than a year looking for ways to deal with the large, voracious — and rapidly expanding — blue catfish population acknowledges that the invasive species has likely become a permanent resident of the Bay, and says action is needed to prevent “irreversible” harm to the ecosystem.

Chief among its recommendations is an expanded commercial fishery that might control the population and create a new product for watermen.

The task force’s draft report recommends a range of actions, such as identifying sensitive areas, such as high-quality spawning grounds, where extra efforts against the predators might protect high priority species such as shad.

It questioned whether states should continue to promote catfish trophy fisheries, and said efforts should be ramped up to warn the public about the ecological impacts of invasive catfish and dissuade anglers from moving them into new areas.

The report was completed by the Invasive Catfish Task Force — a group of state, federal and university biologists assembled by the state-federal Bay Program’s Sustainable Fisheries Goal Implementation Team to identify actions to control blue and flathead catfish, neither of which are Bay watershed natives.

Widespread in the Bay, but not native

Most of the report’s focus is on blue catfish, which tolerate moderate salinities and are more numerous and widespread in tidal Bay tributaries. Flatheads are more restricted to freshwater areas.

Nonetheless, flatheads — which are already the most abundant predator in the Susquehanna River — are likely to get more management attention in the future, said Bruce Vogt, acting deputy director of the National Oceanic and Atmospheric Administration’s Chesapeake Bay Office, and task force chair. “There is already pretty significant concern about flatheads in Maryland and Pennsylvania,” Vogt said.

The report will likely be updated as new information is gained. The report and its recommendations are now under review by the Bay Program’s Scientific and Technical Advisory Committee, which could result in some changes later this year.

The report warns that if left unchecked, invasive catfish could cause substantial ecological and economic harm to the Bay. 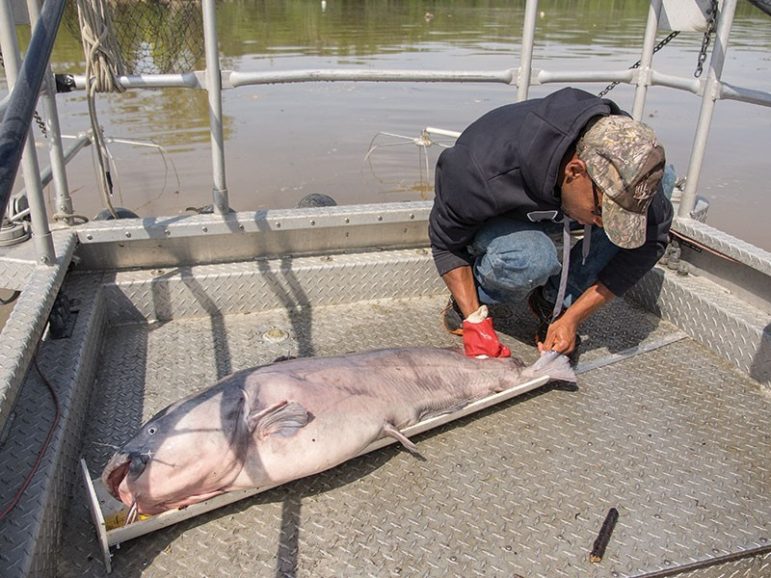 Maryland DNR biologist Branson Williams has to use an extra ruler to measure a blue catfish too big for the standard measuring board. The fish, collected in the Potomac River near Fort Washington, MD, was 44 inches long. (Bay Journal photo by Dave Harp)

Recent studies suggest that growing numbers of blue catfish could threaten efforts to restore species such as river herring and shad, and they may also eat substantial numbers of economically important blue crabs. They could also outcompete native white catfish in some areas, and threaten native mussel populations.

They have become so numerous in some places that they interfere with watermen targeting other species, such as striped bass.

“The expanding range and increasing populations, particularly of blue catfish, have resource managers concerned that without management intervention, the damage to Chesapeake Bay resources may be irreversible,” the task force report said.

Blue catfish were introduced into Virginia Bay tributaries by state biologists beginning in the early 1970s in an effort to boost the recreational freshwater fisheries — a common practice at the time.

Over the last decade, their population has increased dramatically and spread to most tributaries on the Western Shore. They have begun turning up in Eastern Shore rivers as well.

Although they generally avoid salinities higher than 14 parts per thousand, years with high river flows and reduced salinities allow them to enter new areas. In addition, biologists believe anglers have intentionally introduced blue catfish into some tributaries because they want more opportunities to catch large fish.

In parts of the James River, blue catfish are thought to be the most abundant fish, and their numbers are rapidly growing in other systems, such as the Potomac.

Top predators and will eat most other fish

They are top predators, and will eat most other fish — and shellfish — in the rivers. And, they can reach huge sizes — the Virginia tidal record is 102 pounds.

“In the aquatic system, there is nothing that gets bigger than them — unless it’s another blue catfish,” Vogt said. The task force report warns that blue catfish could double their current range in the Bay watershed.

It noted that eradication of an invasive species is “rarely feasible or cost-effective once a species has become widely dispersed in an open aquatic system like Chesapeake Bay.” As a result, the report focused its recommendations on actions that would help control the population and limit its expansion.

The primary control method it proposes is to promote a commercial blue catfish fishery that would give watermen a new product to market while removing invasive fish. While this is already under way, the report says it may require new investments, such as new or expanded processing facilities, to maximize harvest.

Promoting a fishery, though, tacitly acknowledges that the goal is not to rid the Bay of an invasive fish, but to manage it, especially if fishermen begin buying gear to target catfish, and seafood processors invest in new facilities to handle a wave of new fish.

“Once you open a fishery like that, you are probably in it for the long haul,” Vogt said. “Then the challenge is to come up with a framework that gets fishing pressure where we are reducing the ecological impact, but also sustains this new economy that has developed around the catfish. That’s a tough one.”

“If you are using a commercial fishery as a way to manage a thing like blue catfish, you don’t want the fishery to crash,” said Matt Ogburn, a researcher with the Smithsonian Environmental Research Center who works with blue catfish and is a member of the task force.

The bigger immediate issue, though, is whether a fishery can actually make a dent in the booming population. That will depend in large part on whether markets can be grown to increase demand. Fishery agencies have been promoting catfish, and a nonprofit group, the Wide Net Project, is also working to increase demand for the fish, including touting it as a healthy food to hunger-relief organizations.

While consumer demand is growing, Wendy Stuart, co-founder of Wide Net, said markets for blue catfish ultimately need to be developed beyond the Bay watershed to stimulate enough fishing demand to curb the population.

The group recently reached an agreement with a Boston-based processor to begin marketing blue catfish from the Bay. “Local food is good, but it doesn’t always solve the problem,” Stuart said.

The Bay region isn’t alone in this approach. A fishery for lionfish is being promoted in the Gulf of Mexico to reduce impacts from that invasive fish. “Harvest pressure is making a difference in that fishery,” said Stephen Vilnit, fisheries marketing director with the Maryland Department of Natural Resources and a member of the task force.

“You may not be able to catch the last fish, but you might be able to knock them to a level where they’re not having the huge ecological impact they are currently having,” Vilnit said. 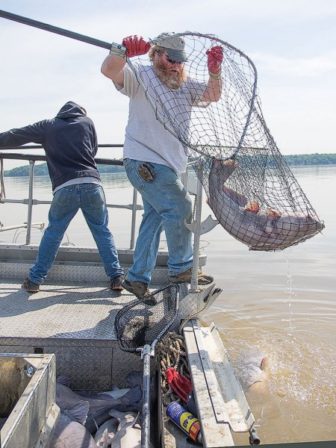 Maryland DNR biologist Branson Williams brings in a blue catfish that was electroshocked during a survey of the Potomac River. Bay Journal Photo by Dave Harp)

In addition to promoting a commercial fishery, the report suggests that states consider incentives that would increase harvests, such as allowing boat captains to use electrofishing gear that targets blue catfish, which are stunned by a specific frequency that doesn’t affect other fish. Electrofishing has proven to be a highly effective way to collect them. But more studies would be needed to assess the feasibility of commercial electrofishing and potential safety concerns.

The report also calls for states to identify areas with populations of native species that could be threatened by blue catfish and to target those areas for additional removal efforts, possibly by sending out crews with electrofishing gear.

Such areas might include spawning areas for shad, river herring and other fish species, as well as habitats for shellfish and species with important ecological value.

Not eradicating but keeping numbers low

While blue catfish likely wouldn’t be eradicated from those areas, the goal would be to keep numbers low so they would not pose a substantial threat to native species.

Protecting targeted areas could prove challenging. Ogburn has been tracking blue catfish movements in the Patuxent River, and has found they are highly mobile and could quickly repopulate areas from which they are removed.

Vogt agreed that “it probably won’t work everywhere,” but said task force members did not want to write off all areas. “People thought it might make sense to try in a few places but we have to be smart about what places we choose,” he said.

In a possiby controversial recommendation, the task force said the benefits of removing dams should be weighed against the potential that such action could open the door for catfish to reach new areas. For instance, a new fishway at Bosher’s Dam outside Richmond allowed blue catfish to colonize the James River as far as Columbia, about 50 miles upstream.

In reality, Vogt said he was skeptical that concerns over blue catfish would halt any dam removals or new fish passages. “A lot of people told us that while we are looking at a dam as a barrier, it most likely is not — because people have likely already caught and moved catfish to places on the other side of the barrier,” he said.

The task force recommended that current state fishing policies and regulations be reviewed to identify those that may promote the persistence and expansion of invasive catfish populations, such as trophy fisheries, though the report said both Virginia and Maryland officials seemed to oppose that action in the James or Potomac rivers.

“Managers should discuss the risks associated with maintenance of trophy fisheries,” the report said. “This perpetuates the maintenance of large individuals in the environment for long periods of time.”

Finally, it said improved public education is needed to inform anglers and others about the risks blue catfish pose. That could help discourage anglers from moving fish into new areas, and highlight the concerns to the general public. The public is less informed about blue catfish than snakeheads — the headline grabbing “frankenfish” that invaded the Potomac River a decade ago — even though catfish likely pose a greater threat, Vogt said.

That’s starting to change, as Maryland, supported by the Bay Program, began posting warning signs about catfish earlier this year, and agencies are beginning to post more information on their websites. Still, Vogt said, “awareness is not at the level of the snakehead.”

Information about blue and flathead catfish is available at www.chesapeakebay.noaa.gov/fish-facts/invasive-catfish

Here are the recommendations of the Maryland Department of Natural Resources.