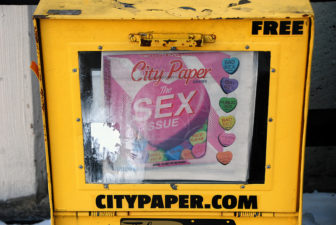 MISSING THE CITY PAPER: In an opinion piece for Red Maryland, Brian Griffiths writes about the Sun’s decision to close the City Paper, the 40-year-old alternative weekly it bought just a few years ago. He writes that while he may have disagreed with the City Paper’s editorial bent, losing more reporters is bad for democracy.

FARM BUYING PROGRAM: Buying a farm can be a big hurdle for beginning farmers trying to start a new business and lifestyle. Now the Maryland Agricultural and Resource-Based Industry Development Corp. wants to help farmers purchase a farm and set it on the path to permanent preservation, Samantha Hogan reports for the Frederick News-Post. The organization has $2.4 million available from the state budget to help purchase farms across Maryland in the coming year.

RALLY CALLS ON HOGAN FOR HEALTH CARE: A rally outside of the Government House in Annapolis Sunday afternoon called on the state’s leader to take a vocal stance against Republican-led health care bills being considered on Capitol Hill, and criticized him for vetoing an earned paid time off bill passed by the Maryland General Assembly in April, Rachael Pacella of the Annapolis Capital reports.

HOGAN’s CONUNDRUM: In a column for MarylandReporter.com, Barry Rascovar writes that although he’s a Republican, Gov. Larry Hogan is trying hard to avoid offending Maryland Republicans who support an immediate repeal of the Affordable Care Act. Yet he’s acutely aware of the harm, and human pain, such a move would have on hundreds of thousands of Marylanders.

EDWARDS CITES MS IN HEALTH CARE PLEA:  Donna F. Edwards, a Democrat member of the U.S. House from Maryland from 2008 to 2017, writes, in an op-ed in the Post that is directed at her former colleagues in Congress about her recent struggles with multiple sclerosis and how, without the health insurance that she had in the House, she has been dealing with the illness thanks to Obamacare.

THE SIMONAIRES: In an article for the National Conference of State Legislatures magazine from 2016, Megan McClure highlights four legislators who serve with family members, including the Simonaires of Anne Arundel County.  “Maryland Sen. Bryan Simonaire and Del. Meagan Simonaire are the first father-daughter combo to serve concurrently in the Maryland General Assembly. Their supportive family ties have provided a means for collaboration that has helped the younger Simonaire learn the ins and out of legislative life quickly,” McClure writes.

HOGAN’s LIMITS: The editorial board of the Sun writes that the governor is right that there are limits to what the state can do to solve Baltimore’s violence epidemic, but we haven’t yet approached them

SMITH ISLAND TREADING WATER: Scott Dance of the Sun writes about Smith Island, which has been losing land and population. Instead of using $1 million in Sandy relief money to chase residents away, the federal, state and county governments will spend what could end up being tens of millions of dollars to preserve the island’s history for at least another generation.

HAGERSTOWN AIRPORT WOES: Clifton Gee landed his dream job — as a pilot ferrying passengers on short-hop flights between the tiny one-gate airport in Hagerstown and two larger hubs in Baltimore and Pittsburgh. The work enables Gee a rare opportunity for a commercial pilot: to fly all day and still be home for dinner almost every night. But a proposal by the Trump administration would do away with the program that made Gee’s job possible, Lori Aratani reports for the Post.

DELANEY CRITICIZES HOGAN: U.S. Rep. John Delaney has not said whether he’ll run for governor in 2018, but on Friday he criticized Republican Gov. Larry Hogan’s job performance. Andrew Metcalf of Bethesda Beat asked the Democrat how Hogan has been performing since being elected in 2014. “I don’t think the governor has the right economic vision for the state,” Delaney said. “I don’t think he’s been able to work with the state legislature to really get anything material done.”

HARRIS HARASSED: Ryan Miner of the Miner Detail blog writes that as he sought information from the office of U.S. Rep. Andy Harris on Harris’ decision to offer legislation to financially penalize states that refuse to turn over some voter information to the White House, Harris aides say they feel that he is harassing them.

RUSSIAN DACHAS: As Donald Trump meets for the first time with Vladimir Putin, resolving a dispute over a pair of Russian diplomatic compounds seized by the United States last year could be a first step in repairing a relationship wracked by Syria’s civil war, Ukraine’s separatist violence and Moscow’s meddling in the U.S. presidential election. But even returning the so-called dachas in Maryland and New York concerns some that giving back the sites could bolster Russian espionage efforts in America, the AP is reporting.