COLLEGE SECURES ROSEWOOD: Stevenson University in Owings Mills completed a 17-year effort Wednesday as it won final approval of a deal for the state to transfer 117 acres of the former Rosewood Center to the school for its future expansion, reports Michael Dresser in the Sun. The Board of Public Works unanimously approved the sale of most of the grounds of the longtime institution for the developmentally disabled for $1.

RETURNING JUVIES TO MARYLAND: Comptroller Peter Franchot Wednesday called on the state Department of Juvenile Services to find a way to transition more than three dozen juveniles in out-of-state facilities back to Maryland, Bryan Sears writes in the Daily Record. The Board of Public Works Wednesday approved 39 contracts valued at more than $249.3 million for placement of youth in the custody of the Department of Juvenile Services in both in-state and out-of state facilities.

PG BECOMES METRO HURDLE: Prince George’s County has emerged as an additional hurdle to Metro General Manager Paul J. Wiedefeld’s long-term funding plan for the system, Faiz Siddiqui reports in the Post. The biggest opposition to the proposal for $500 million in annual dedicated funding was expected to come from Northern Virginia, but Metro board member Malcolm Augustine, who represents Prince George’s, said Wednesday that he could not commit to supporting a resolution that will be presented to the panel today backing Wiedefeld’s plan. The “Sense of the [Metro] Board” measure is designed to gauge where the region stands on the proposal.

NATIONAL HARBOR UP, OTHERS DOWN: GM’s National Harbor casino continues to vacuum up the gambling dollars in Maryland, putting a pinch on both Baltimore’s Horseshoe Casino and Anne Arundel County’s Maryland Live Casino, writes Mark Reutter for Baltimore Brew. Gambling revenues at Horseshoe were down 18.1% in May, or $5.2 million, from May a year ago, according to figures released by the Maryland Lottery and Gaming Control Commission. May revenues at Maryland Live slowed by $13.2 million, or 22.3%, from May 2016.

BROCHIN AMONG HONOREES: State Sen. Jim Brochin of Baltimore County was among five people honored by the Baltimore Child Abuse Center as Outstanding Community Heroes. The honorees were recognized for their commitment to keeping children safe from sexual abuse, trauma and other adverse childhood experiences, according to the Daily Record.

MADALENO BLASTS HOGAN: A Maryland state senator who plans to seek the Democratic gubernatorial nomination has accused Gov. Larry Hogan (R) of “demagoguing Maryland’s immigrant residents” in a recent fundraising letter, Ovetta Wiggins of the Post reports. Sen. Richard S. Madaleno Jr. (D-Montgomery County) said he was “deeply disappointed” that Hogan’s campaign would use “Trump tactics of dividing our communities and scapegoating immigrants” to solicit contributions for his reelection.

GOP BUSINESSMAN TO RUN FOR STATE SENATE: A Republican businessman will seek his party’s nomination for the District 3 seat in the Maryland Senate, Danielle Gaines of the Frederick News Post reports. Craig Giangrande, who owns several local Burger King franchises, made his announcement Wednesday morning. Giangrande, 52, is a first-time candidate in a race that’s been targeted for victory by the state Republican Party. Democratic Sen. Ron Young, of Frederick, has that seat now, but he won it by a mere 614 votes in 2014.

DUCK AGAIN TO SEEK 6th DISTRICT HOUSE SEAT: After filing to officially enter the 2018 race for Democratic nominee to the U.S. House for the 6th District of Maryland on Wednesday, Andrew Duck hit the campaign trail. Duck, a Democrat who has unsuccessfully run for the 6th District seat in Congress three times before, hopes to seize the moment, building a grassroots campaign in light of speculation that current Rep. John Delaney (D) will cede the seat to seek the governor’s office, reports Danielle Gaines of the Frederick News Post.

NEW MD DEM PARTY STAFFERS: Maryland Democratic Party chair Kathleen Matthews on Wednesday announced the hiring of a new executive director and a digital communication manager. Besides Stephanie Potter, who will be the new executive director, Matthews named Brittany Oliver as the new digital manager. Oliver had worked for the American Civil Liberties Union of Maryland as police accountability program coordinator. And Potter is a former aide to Sen. Al Franken (D-Minn.) and most recently was executive director of Senate Majority PAC, which supports Democratic senate candidates, Bill Turque of the Post reports.

PUBLIC CAMPAIGN FINANCING IN MO CO:  A Democratic candidate seeking public campaign financing in Montgomery’s most competitive County Council District said he will use Crowdpac, an Internet-based crowdfunding platform that draws donors from across the country, to raise money for his campaign, reports Glynis Kazanjian for MarylandReporter.

WA CO SEX HARASSMENT POLICY: In the wake of a sexual-harassment complaint against Commissioner LeRoy Myers, at least three of the five members of the Washington County Board of Commissioners said the county’s harassment policy should or does apply to them, reports Julie Greene for the Hagerstown Herald Mail.  Whether that policy applies to the commissioners was an issue raised recently by the attorney for Sarah Lankford Sprecher, the assistant county administrator who accused Myers of taking “predatory and offensive sexual and related actions” against her, according to a May 30 legal notice of claim.

CHARGE IN THEFT FROM DELEGATE: A former employee of Historic Inns Annapolis has been indicted by the Anne Arundel County Grand Jury for allegedly stealing more than $10,000 from a campaign finance fund for Del. Sally Jameson (D-Charles County), Meredith Newman of the Annapolis Capital reports. 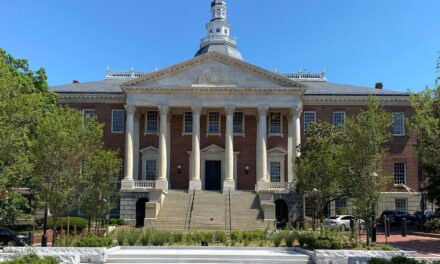