RAPISTS’ PARENTAL RIGHTS ARE WRONG: The Post editorial board opines that Maryland’s law granting parental rights to rapists has long been a source of embarrassment.  Some legislators have been trying for a decade to bring Maryland into line with other states, with bipartisan support. But the General Assembly again this year adjourned without taking action. That means that a woman who becomes pregnant as the result of rape will still be faced with having to negotiate with her assailant over custody or put the child up for adoption.

PUT BRAKE ON METRO CRISIS: Metro is headed toward crisis, and the Washington region hasn’t agreed on the best way to save it. But what would a realistic rescue package look like — one that could win sufficient political and popular support? Robert McCartney of the Post writes that, to untangle the knot, he offers a set of proposals designed to directly address Metro’s structural problems in ways that could win regionwide backing. They are split-the-difference compromises, which give something to everyone and everything to no one.

BATTLING ADDICTION: Dr. Mary Jo Cannon, in an op-ed for MarylandReporter, opines that, “as a physician on the front lines of the battle against heroin and prescription opioid abuse, I have seen the triumphs and the tragedies that epitomize Maryland’s fight against addiction. That experience has taught me that the best way Maryland policymakers can combat addiction is to treat it as a disease of the brain. As Gov. Larry Hogan has said, “this is a disease, and we will not be able to just arrest our way out of that crisis.”  The governor is right, and there are key steps state government can take to bolster its fight against addiction even after the 2017 legislative session has concluded.”

OPIOID PULITZER: In only 15 years, American newspaper companies slashed their workforces by more than half — from 412,000 employees in 2001 to 174,000 last year, and the toll has been worse on statehouse reporters, writes Margaret Sullivan in the Washington Post. But that didn’t stop the statehouse reporter from Charleston, W.Va., Gazette-Mail from winning a Pulitzer Prize for investigative reporting on the topic. Here are links to the stories that document the complicity of legal drug distributors and small local pharmacies. (It is probably no coincidence that the paper is still family owned, a rarity in these days of consolidated media.)

BAY CLEANUP BUDGETING: With President Donald Trump’s “skinny” budget looking to cut all federal funding toward Chesapeake Bay cleanup programs, Democrats and environmental advocates on Monday looked to send a message to the president. They need $100 million — not $0, Phil Davis of the Annapolis Capital reports.

FUNDING CITY SCHOOLS: How to fix Baltimore City’s struggling school system has been a divisive and contentious issue in our state for years, Chris Papst reports for WBFF-TV. Lawmakers in Annapolis and Baltimore all have different ideas on what will work. Project Baltimore is looking into some of those ideas and the push to change how we fund our schools.

TOT SUSPENSIONS: Will was suspended six times from Jacobsville Elementary in Pasadena as a kindergartner. His mother, Lori Cornwell, says the school didn’t recognize his disability. “They flat out refused to accept it,” she said. Dr. Brea Perry, a sociologist, says that suspensions, which have doubled since the 1970s, have devastating consequences for kids. Jonna McKone of WYPR-FM reports that lawmakers in Annapolis passed a bill in the recent General Assembly session that forbids suspending or expelling pre–k to second graders, except in extreme cases.

SEN. YOUNG CHATS: In this podcast for the Frederick News-Post, Sen. Ron Young, D-District 3, dishes on his artistic side, Frederick County history and life in the General Assembly, with host Colin McGuire and politics reporter Danielle Gaines. 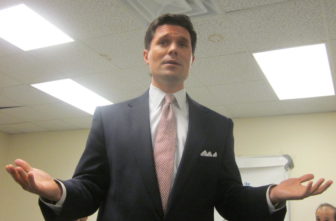 Del. Bill Frick at a 2014 forum for attorney general candidates.

CARDIN SLOW ON FUND-RAISING: Sen. Ben Cardin — one of 25 Democratic incumbents up for re-election in 2018 — had a relatively slow first few months of fundraising this year, bringing in roughly half the amount he did during the equivalent quarter in his last election, John Fritze of the Sun writes.