TRUMP PROTESTED AT BPW: Josh Hicks of the Post reports that three activists crashed a public meeting in Maryland on Wednesday in the latest coordinated effort to pressure Gov. Larry Hogan (R) into opposing actions by the Trump administration that they say will harm health care, immigrants, refugees and women.

HOGAN UNMOVEABLE ON TRANSIT LAW: Republican Gov. Larry Hogan’s administration is refusing to compromise with Democrats on a controversial transportation scoring law, demanding its full repeal before they entertain anything else, Erin Cox reports in the Sun. “We can’t salvage this law,” Transportation Secretary Pete K. Rahn told the Senate Budget and Taxation Committee on Wednesday. Hogan’s chief legislative officer, Christopher Shank, said if the administration discusses a compromise, “that conversation has to begin with repeal.”

STATE CRAB MANAGER FIRED: Maryland’s veteran manager of the state’s blue crab fishery was fired this week after a group of watermen complained to Gov. Larry Hogan about a catch regulation that they contend hurts their livelihood — but that scientists say is needed to ensure a sustainable harvest, Rona Kobell reports in the Bay Journal. Brenda Davis, crab program manager for the Department of Natural Resources and a 28-year state employee, said she was informed Tuesday that her services were no longer needed.

CORPORATE FILING FEE CHANGES OPPOSED: Maryland businesses have come out strongly against a proposed change in an annual corporate fee that would go from a flat fee structure to a progressive tax based on a company’s asset valuation, writes Daniel Menefee for MarylandReporter.com. The annual corporate filing fee is currently set as a flat fee of $300 in order to maintain the legal entity’s existence in the state; the progressive tax could climb as high as $4,000 based on a company’s fixed assets.

HOTELS WANT HOME RENTALS TAXED: Traditional hotels are making a push to require people who rent out their homes to guests to pay the same taxes and follow many of the same regulations that they do. A bill before the Maryland General Assembly, backed by the hotel industry, is aimed at regulating short-term rentals through Airbnb, FlipKey, VRBO and similar websites, Pamela Wood reports in the Sun.

BPW OKs PORT EXPANSION: The Board of Public Works gave the Maryland Port Administration the green light to acquire a large parcel of land at Point Breeze in Southeast Baltimore for the largest expansion of Seagirt Marine Terminal in more than two decades, the Sun’s Michael Dresser reports. The board authorized the port to spend up to $92.5 million to acquire the land for additional storage space for Seagirt, where business grew more than 9% in the second half of 2016.

HOGAN PUSHES FOR HEARING: Gov. Larry Hogan took a shot at Democratic General Assembly leaders Wednesday, prodding the House to schedule a hearing on one of his bills while tweaking Senate President Mike Miller for using colorful language. Leading off a meeting of the Board of Public Works, the Republican governor criticized House of Delegates leaders for being slow to schedule a hearing on legislation that would require the legislature to stream live video of its floor sessions, writes Michael Dresser in the Sun.

ENVIRONMENTAL RALLIES: Support for forest protection and opposition to hydraulic fracturing sparked two different rallies Wednesday in Annapolis, just before the House Environment and Transportation Committee heard testimony on three related bills, reports Jack Chavez for Capital News Service. Two of the bills would ban and criminalize hydraulic fracturing, or fracking. The other would require developers to replant an acre of trees for every acre of forest they clear.

BUS DRIVER MEDICAL FITNESS: Baltimore lawmakers have introduced legislation that would make it a crime for a privately contracted bus driver to fail to supply proper medical records showing their fitness to drive, following a deadly crash in the city last year. The Sun’s Ian Duncan reports that the bill would impose a maximum $5,000 fine on drivers who don’t have the required documentation on file with their employers.

ZIRKIN ROLE IN SUIT CALLED ‘SHAM:’ State Sen. Bobby Zirkin joined the defense team in a medical malpractice lawsuit last month even though he has limited legal expertise in that area, a move the plaintiff’s lawyer called a “sham” intended to win a last-minute trial delay. Ovetta Wiggins of the Post reports that Baltimore City Circuit Court Judge Althea M. Handy denied a request from Zirkin to reschedule the trial until after the Maryland General Assembly’s legislative session, ruling that the court could not find any reason for Zirkin to join the case in the “11th hour” other than to seek a delay.

HOGAN WON’T PUSH NATIONAL REDISTRICTING REFORM: Gov. Larry Hogan will not push for national redistricting reform because he prefers advancing his own legislation, designed to end gerrymandering in the state, Josh Hicks reports that a spokesman said Wednesday. Hogan was responding to a letter sent to him by Maryland’s seven Democratic members of Congress, asking him to serve as “a forceful advocate” for a national effort to mandate a nonpartisan redistricting process. “We believe that any real reform effort must be national and bipartisan,” the letter said.

FREDERICK ETHICS BILL: Sen. Michael Hough and Del. Kathy Afzali held a public forum Wednesday evening to hear concerns from Frederick residents on Hough’s ethics reform bill. Those who spoke largely expressed opposition to the bill, which Hough drafted after saying the bill from Frederick County Executive Jan Gardner didn’t do enough. After initial feedback on Hough’s original bill, he made some revisions to get it ready for introduction today, Allen Etzler reports in the Frederick News Post.

FREDERICK BoE STUDENT MEMBER VOTING RIGHTS: Sen. Ron Young asked his Senate colleagues on Wednesday to support a bill to extend limited voting rights to the Frederick County Board of Education student member, Danielle Gaines of the Frederick News Post reports. There were no witnesses during the three-minute bill hearing.

AA SCHOOL BOARD MIX: Anne Arundel delegates are moving closer to compromise on a proposal that would alter the way the county’s school board members are selected, writes Amanda Yeager in the Annapolis Capital. The delegation’s education subcommittee passed changes this week to competing measures. After the tweaks, both bills now propose a fully elected school board. Meanwhile, a third bill suggesting a hybrid board — with some members appointed and some elected — earned praise from Anne Arundel senators of both parties in a Senate committee hearing Wednesday.

HOYER, BROWN HOLD TOWN HALL: Two Democratic members of Congress from Maryland holding a town hall meeting Tuesday night found a worried but much warmer audience than some of their Republican colleagues have encountered at similar gatherings. U.S. Reps. Steny H. Hoyer and Anthony G. Brown reassured constituents at the Diyanet Center of America, a mosque and cultural center in Lanham that they would be a voice of resistance against the administration of President Trump, whom they accused of unfairly targeting religious and ethnic minorities, fomenting division and transgressing American values, Arelis Hernandez reports in the Post.

ARUNDEL LAUNCHES SPANISH LANGUAGE GOV’T WEBSITE: Anne Arundel County has launched a Spanish language resource website for the county’s burgeoning Hispanic population. Phil Davis of the Annapolis Capital reports that between 2000 and 2010, the county’s Hispanic population nearly tripled — from 12,000 people to 32,000 — according to the U.S. Census Bureau. “Outreach to our Hispanic citizens is a major priority of our administration,” said County Executive Steve Schuh. “This new informational website will better connect non-English speaking residents to county government.”

CARROLL STANDS BY POSTER REMOVAL: Emily Chappell of the Carroll County Times writes that the Carroll County Board of Education stood by the school system’s decision to remove posters from a few high school classrooms, and gave direction to Superintendent Stephen Guthrie to create clearer policy and regulation for future incidents. Guthrie and the Board of Education president addressed the recent incident where a few Westminster High School teachers were told to remove “We the People” posters they had hung in their classrooms. School system officials said the posters, which they deemed to be anti-President Donald Trump, violated policies that say educators can’t take a political stance in the classroom. The article is topped by a video of the BOE. 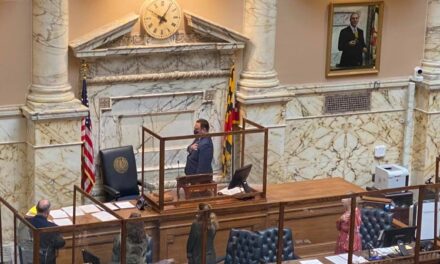