NICE BRIDGE REPLACEMENT: Gov. Larry Hogan announced plans Monday to replace the Harry W. Nice Memorial Bridge in Southern Maryland — and to wage a political fight with the legislature over transportation policy, report Erin Cox and Michael Dresser for the Sun. The two-fold announcement at the base of the bridge launched a massive infrastructure project, and set the stage for a war of words when the Democratic-controlled General Assembly convenes in January. 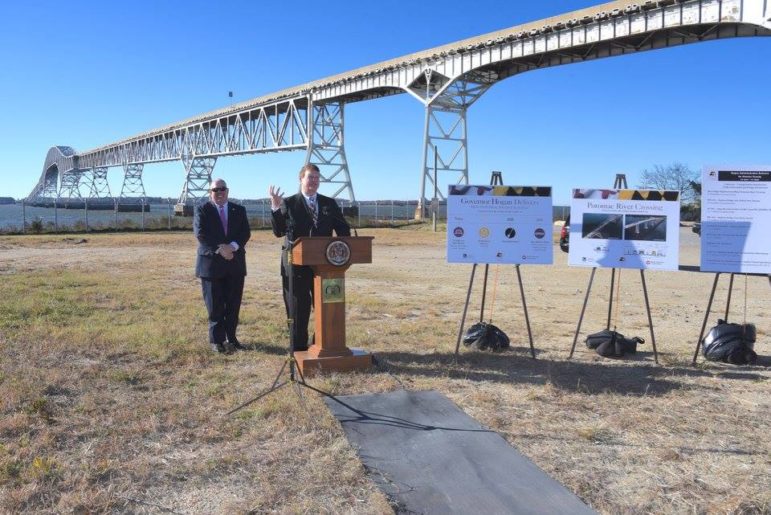 JOB GROWTH: Maryland added 34,700 jobs over the past year, the 20th most of any state in the country, according to new employment data released this morning by the U.S. Bureau of Labor Statistics. The report also indicated that the Pacific Northwest has become the pacesetter for U.S. job growth, G. Scott Thomas writes in the Baltimore Business Journal.

DISPENSARY LICENSING SET: Maryland medical cannabis regulators are set to award preliminary licenses to open medical marijuana dispensaries on Nov. 28, to the ire of a Maryland lawmaker challenging the state over a lack of racial diversity in the burgeoning industry, Fenit Nirappil reports in the Post.

AIR QUALITY AT COAL PLANT: Responding to residents worried that the air near their homes isn’t safe to breathe, Maryland environment officials say they hope to install an air-quality monitor near a coal power plant in Anne Arundel County, Scott Dance reports in the Sun. The Maryland Department of the Environment is exploring whether the federal government or the owner of the H.A.Wagner Generating Station can pay for the equipment, the agency’s secretary wrote Monday in a letter to the Greater Pasadena Council.

NEW OVERTIME RULES: With 10 days to go until new overtime regulations under the Fair Labor Standards Act kick in, employers across Maryland should be taking a hard look at how the law will affect their business, if they haven’t already, Anamika Roy of the Daily Record reports.

HOGAN URGES ‘DEEP BREATH:’ Gov. Larry Hogan, offering rare public comments about the election of Republican Donald J. Trump, said Monday that “everyone ought to take a deep breath.” Erin Cox of the Sun writes that the Republican governor said he would not comment on the president-elect’s staff appointments, which have been criticized by senior Maryland Democrats as “deeply troubling.”

BACKLASH AGAINST GOP COMING? In a column in MarylandReporter.com, Michael Collins writes that a victory by Hillary Clinton—and a 2018 backlash against her—most likely would have given Gov. Larry Hogan’s re-election bid a boost, as Josh Kurtz argued in MarylandReporter.com last week. However, overreach by a unified Republican federal government may cause an anti-GOP backlash similar to what we saw in 2006.  Back then voters around the nation wanted to “send a message” to President George W. Bush; Maryland Republican Gov. Bob Ehrlich, who had a 57% approval rating, suffered the consequences.

HOGAN TALKS TURKEY: Bryan Sears of the Daily Record writes that Gov. Larry Hogan was talking turkey and poking the bear during a Monday morning interview on a Southern Maryland radio station. Hogan, appearing on the on the T-Bone and Heather show on WSMD 98.3 FM to promote a later announcement at the Gov. Harry W. Nice Bridge, said he has already had his Thanksgiving dinner this past weekend.

FOUR DAYS LEFT TO VOTE: Please vote every day till Black Friday for MarylandReporter.com as the “most informative” website in the Baltimore Sun’s annual Mobbies contest. This is an audience building tool for the Sun, but we actually won in 2013. You don’t have to be a citizen, you don’t have to be 18, you don’t have to be from Maryland. Sounds like an ideal contest for 2016, don’t you think? Please stuff the ballot box. Vote here. Early and often.

UMD TO SUPPORT UNDOCUMENTED STUDENTS: University of Maryland President Wallace Loh has promised his student body that the school will fight for undocumented students, Kimberly Escobar writes in the Diamondback. “I ask that the UMD community call on the leaders of our nation to continue the DACA youth initiative,” Loh wrote. “We must ask our Federal officials to at least honor the grants of deferred action already approved until such time as Congress enacts immigration reform legislation.”

HE’S BACK? Less than a week after indicating he would not seek a position in President-elect Donald Trump’s administration, retired Johns Hopkins neurosurgeon Ben Carson seemed to soften that stance, indicating he would give any offer “serious consideration.” The renowned physician ran an unsuccessful campaign for president this year and then became an early and vocal surrogate for Trump.

DANCE TO REPORT TEACHING PAY: Liz Bowie writes in the Sun that Baltimore County schools Superintendent Dallas Dance has agreed to report the pay he receives as an adjunct professor after an ethics panel found he had violated financial disclosure rules. William Groth, a former school system employee who sought to have Dance investigated over a variety of allegations, brought a complaint to the county school board’s ethics review panel last spring.